HBOWatch is testing out a new writer and this is his second test post. So give due attention to the words of Travlis Eric Hallingquest.

On April 21st HBO airs a superb movie that completed a trifecta of a marvelous story arc.  War for the Planet of the Apes is director Matt Reeves’ swan song to a trilogy that not only rebooted a 20th Century Fox film series, but further made the case that motion-captured action spectacles could be quite poetic and engaging. A well-penned script, captivating cinematography, subtle but enticing special effects, and a tour de force by Andy Serkis as the ape leader Caesar, and a talented supporting crew, makes War a sound Saturday 8pm feature.  Mild spoilers follow.

Many mainstream reviews draw comparisons of War to the 1979 classic Apocalypse Now.  This assessment is justifiable due to the Colonel Kurtzesque performance by antagonist Woody Harrelson as “The Colonel”, and the pulse-pounding helicopter air raids on military compounds.  However, the tragic nature of events surrounding the film’s hero Caesar, evokes memories of Saving Private Ryan, due to a compassionate yet controversial decision made by the apes during the first act of the film.  It is paramount to remember that Caesar was never a highly trained military combat officer.  He was never even a grunt private for that matter.  Nevertheless, it was Caesar’s fortitude, compassion and intelligence that enabled him to be an exemplary father and soldier. 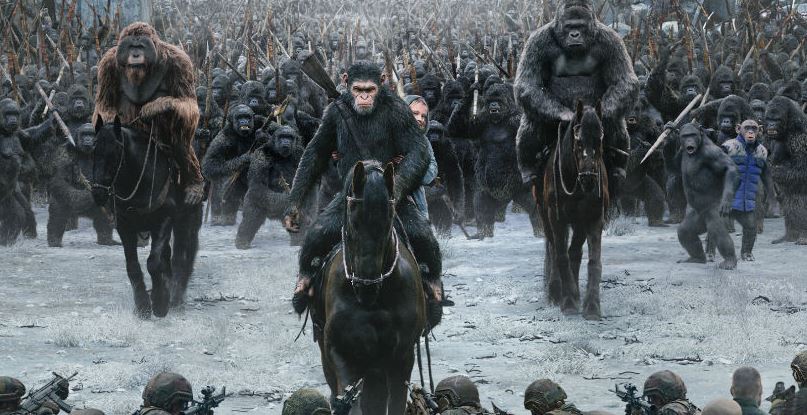 Steve Zahn’s take as Bad Ape is the appropriate comedic relief.  Although one of the better films of 2017, War can at times be downright depressing (one of the few glaring flaws), and the Bad Ape character reminds the audience that all hope is not completely lost. The photorealistic CGI captures splendid performances from a talented cast.  War may be a slightly misleading title on the surface, for there are not an abundance of action sequences.  For this is a character-driven piece, and when the exhilarating battle scenes do occur, the audience has characters that they actually care for; characters that at times seem more human than the human characters.  The message of the film is not that humans are bad, but intelligent species have the choice to use their abilities to either destroy or save the planet.