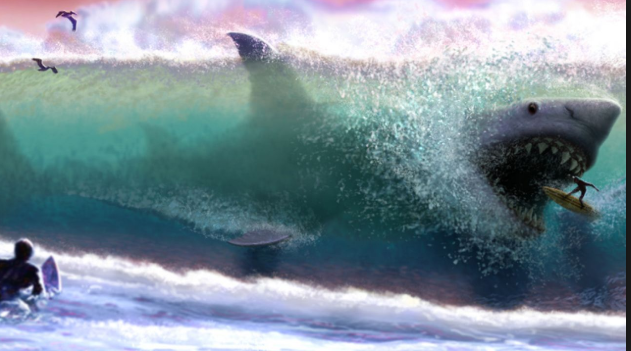 First, I want to say that I was pretty much Team Meg Shark for the entire movie. Why? Because sometimes human beings are arrogant asses and think that they’re so much smarter than animals, sea creatures or Mother Nature. I enjoyed Godzilla (the 2014 remake) and I didn’t get upset when the King of Lizards went on a bit of rampage; he had good reason to be a bit prickly. The Meg is an ancient shark, properly titled a Megalodon. While we’re at it, in any type of mythical creature/science fiction/wild beast type of movie, where the humans feel the need to decimate anything foreign to them, this movie was a bit frustrating to watch.

In your typical sci-fi/horror genre, there’s always that one character, who’s experienced something pretty bad – and when this person attempts to tell his or her experiences to other people, with the intention of warning them or merely trying to tell them of the trauma they’ve experienced, they get the eye rolls, the facepalms and are generally written off as being ‘silly, crazy, not making any sense’ or maybe they’re on drugs, suffering from PTSD or alcoholism. This is the case with Jonas Taylor (Jason Statham) – who we see experiences a 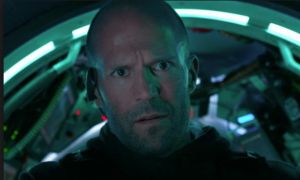 pretty bad botched rescue attempt. In the panic and danger, he was unable to rescue anyone he was with and saw some sort of creature, that was inflicting damage to the submarine with each passing second. Anyone who’s ever been in high anxiety, a stress-inducing situation can sometimes second guess themselves, as to what they see, hear or think. Jonas is flat out dismissed.

Years later, a very wealthy man named Jack Morris ( Rainn Wilson) is financing a sea venture (an underwater exploration and scientific research facility) – and the people in his employ are Dr. Zhang (Winston Chao), Suyin Zhang (Li Bingbing)  and Lori Taylor (Jessica McNamee), Jonas’ ex-wife. Additional crew includes two scientists, Dr. Toshi (Masi Oka) and a rather odd man, known to all as “The Wall” (Ólafur Darri Ólafsson). This scientific crew is down in this underwater lab to conduct a series of tests and investigations into a very steep portion of the Mariana Trench. I don’t know about you but the idea of going somewhere that’s even deeper and darker, than nobody has previously ventured into, gives me the creeps and just oozes disaster. But hey, these folks go in, do their scientific thing and everything appears to be peachy when…a mysterious creature rams their submersible craft. Contact is completely cut.

Of course, in this sort of scenario, you’re going to have a motley crew of people – with varied opinions on how to handle the situation. One oddball character, Jack Mackreides (Cliff Curtis) makes the suggestion of sending none other than Jonas into the fray – given his experience and the fact that maybe Jonas might actually know what he’s doing. Dr. Zhang’s daughter makes an attempt to rescue the others but guess what happens?? She’s almost killed because of dumb people doing dumb things. Jonas arrives to save the day because clearly, everyone else is incompetent or just plain stupid. So much for thinking that plot through. 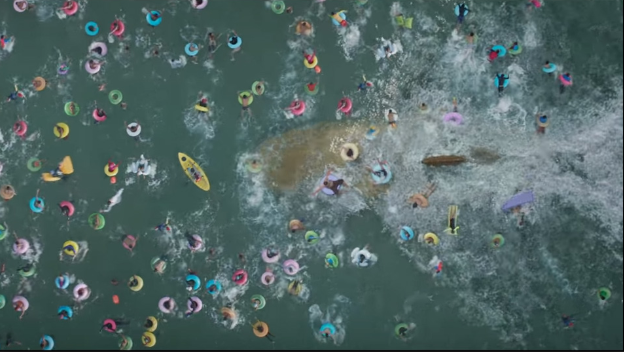 The Megalodon very stealthily followed the crew from the Mana One research facility. Maybe it’s ticked off with pesky humans interfering with things that are in the deep. Maybe the scientists should have left well enough alone and packed up shop and left ASAP. But nope – all in the name of research and being heroes – the crew devises a plan to stop the Meg from creating further havoc. In a scene that was eerily reminiscent of Jaws – the scene with the crowded beach, all the folks celebrating and scores of swimmers in the water – the Meg heads for a very crowded beach, Sanya Bay. In the ensuing fear and chaos, the Mana One folks use the audio recordings of a whale call – which actually diverts the Meg’s attention off the people in the bay. There was a moment in this movie where I was petrified for a tiny little dog that was swimming back to its’ owners boat….but thankfully the dog was okay and escaped unharmed.

I would say all’s well that ends well, but I felt sorry for the Meg. The Mana One crew end up killing it and as Mother Nature can be a fickle lady and in true food chain fashion, the Meg is eaten by other sharks that appear from the deep. In one sense, nature took its course with the sharks feasting upon a bigger, deadlier shark. But in another sense, you have to pause and think – what if…there’s another Meg in the dark, deep depths of the Mariana Trench? After all, it could be possible. Just look at the first Meg that scientists saw and IT was killed by the BIGGER Meg.

You don’t mess with Mother Nature. Or the Meg, for that matter.