Patti Cake$ is in the building!! I picked up this movie review on basically a whim of why not, let’s see what happens. And I’m super glad I did. In a lot of ways, Patti Cake$ follows the classic down-and-out girl who wants to make a name for herself in such and such career and deals with the B.S. along the way. But in many other ways, the cliches don’t matter, because like everyone else we love a good underdog story.

Patricia Dombrowski, aka Killer P, aka Patti Cake$, is a plus size woman from New Jersey living with her mom (Bridget Everett) and ill grandmother (Cathy Moriarty).  Swimming in medical debt for her grandmother’s failing health and her mom’s alcohol problem, money is short and rap is her release. She’s out there spitting rhymes with her best friend Jheri (Siddharth Dhananjay) calling themselves Thick and Thin; which is catchy and adorable. The two are desperate to get a shot at the big leagues. Patricia idolizes OZ (Sahr Ngaujah,) an area rapper who made it big and has his own label. But for now, they settle for local music nights at the VFW.

At one such night, an odd guy gets on stage and calls everyone sheep with weird music in the background. Patti kinda digs his groove. After the show, Patti and her boy Jheri hit up a group of people having a rap session.  She gets in there and does her thing. The guy that comes after her pretty much attacks her weight, saying he would never sleep with her and how ugly she is.  That’s sadly classic. So, instead of running away crying, which is what I would do, she spits it back HARD. Right on, girl. She tears him up. So he assaults her back. It a good because she and Jheri get a chance at a small recording place out of it. They smoke up beforehand but Patricia isn’t really a weed person. Well, they peer pressure her into it and obviously, she gets paranoid and ruins the session.  Also, the recording guys give her a hard time and it’s like, well freaking no kidding she got paranoid. She’s not a smoker and y’all pressured her into it. So screw you guys, you’re the reason she’s messed up. 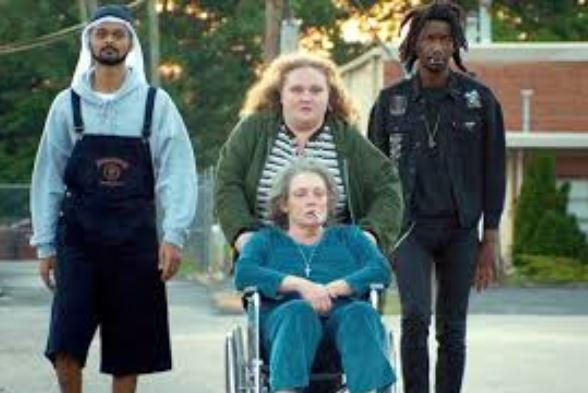 Money keeps getting tighter and Patti takes up a catering job on top of her bar job. Her mom’s drinking keeps her focused on the old days when she was a singer in a band, which she was forced to give up by her husband when she got pregnant, and who also ditched her and Patti a while later. One day while visiting her grandfather’s grave with her grandma, Patti runs into the weird guy (Mamoudou Athie) from the music night and follows him. Turns out he lives in a hut in the woods by the cemetery with his own tiny recording studio because he makes his own music.  With a tiny bit of collaborating with Patti & Jheri, our forest fellow, who calls himself Basterd, the Anarchist Antichrist,  “PBNJ”is born and an album begins.

Still keeping up with her catering gig, she ends up getting promoted to the big leagues since she’s in need of more cash. This lands her at the house of OZ, her idol. She makes his specialty drink and spits rhymes for him. He destroys her because of course our idols are most likely douche bags. But he has a point, which I’ll delve into in a minute.  But her song “PBNJ” lands itself in a rookie rap night and they kill it. While unfortunately, they didn’t win, they later hear one of their demo songs playing on the radio from another one of Patti’s idols that she got to meet.

It’s pretty cliche in terms of the ‘making it out, making it big & following your dreams’ stories go.  But you cannot deny how much heart this story has. Everyone has dreams. Most likely if you ask yourself right now, you would probably say you aren’t doing your dream job. If you are, good on you!  But a lot of people don’t.  And that’s the reason that even though these stories are cliche, we need them. We need to remember we’re capable of following our dreams. Everything is a choice. We can choose to follow what we want. It doesn’t mean it won’t be hard. It doesn’t mean it won’t hurt. It doesn’t mean you won’t need help along the way. But almost every single person is capable of following their dreams and making it a reality. Because your happiness is important. Patti Cake$ affirms that.

Another great point is from OZ when he goes off on Patti. It was rude, for sure. She’s a newbie and she’s just met her idol. He certainly could have been less of a douche about it. But he has a point. At first, Patti’s music is very surface level. It’s about pop culture and regurgitating names and stories. It isn’t real life. It’s not her real life.  Dad is gone. Alcoholic mother. Dying grandmother. Overweight and called Dumbo. Money issues. That’s real. And when that is behind it, that is when Patti kills it. Art imitates life. It’s an old adage. But it speaks the truth. What is your truth?

A lot of the smaller moments got left out here The kind of stuff that shows you the heart in this movie. It clearly screened well at festivals. It’s worth a watch. Even if you don’t like rap, this is good movie for reminding yourself that you are worth following your dreams and making them happen. 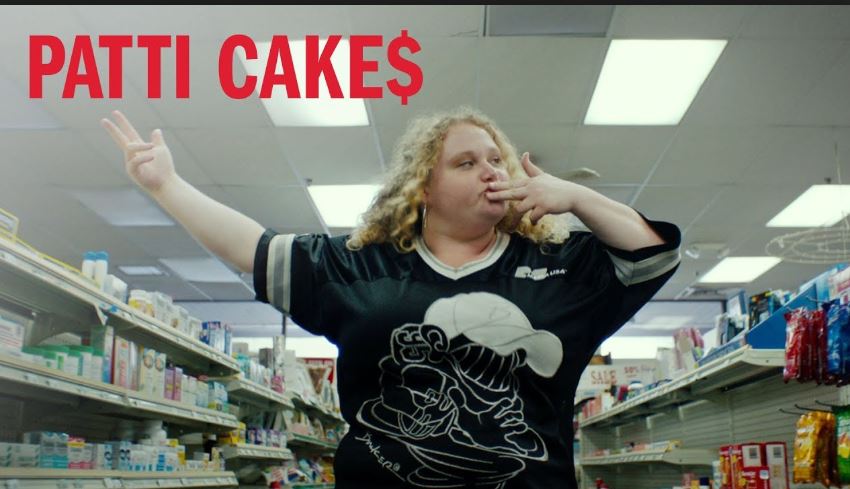