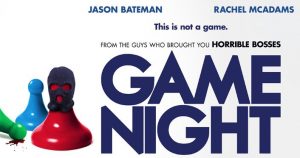 Game Night is a film that I constantly recommend whenever the topic of movies emerges.  When the nominees are announced for the 91st Academy Awards, none of the cast and crew will be mentioned from Game Night.  Even a Golden Globe nomination would be unlikely.  Nevertheless, this well-casted and paced comedy is one of the few films in recent years that could make even the most reserved movie watcher, laugh-out-loud several times during the 100-minute running time.

Jason Bateman and Rachel McAdams have perfect chemistry as the Max and Annie Davis, a married couple who has a penchant for dominating all competitions, particularly during regularly scheduled game nights. The couple has successful careers, and an endearing marriage, but have yet to conceive a child. One area of success that has alluded Max for his entire life is defeating or even matching his older brother Brooks (Kyle Chandler) at anything. Brooks is a swindler who has swindled the mob in his most recent illegal transaction. Brooks poses as a venture capitalist to his family and friends, with Max always feeling inadequate in all regards. One night, after an embarrassing yet hilarious childhood story about Max testing an urban legend, Brooks offers to host the next game night. 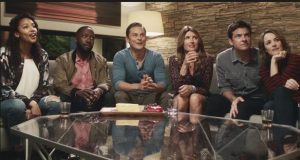 At the Brooks hosted party, the teammates are joined by childhood sweethearts Michelle (Kylie Bunbury) and Kevin (Lamorne Morris), good-natured meathead Ryan (Billy Magnussen), and his sardonic Irish (Ryan thinks she is British) date Sarah (Sharon Horgan), but not their weirdo neighbor Gary (Jesse Plemmons, stealing the show as a solemn, dog-clutching cop who dreams of being invited to play). Just wait until you hear about Gary’s failed marriage and investigation into the sales of Tostitos scoop chips.  Pathetic and side-splittingly funny.  The evening becomes no fun and all deadly games when they discover that Brooks’s elaborate setup has real – and dangerous – consequences. A visit to an “Eyes Wide Fight Club” and an amusing cat-and-mouse chase in pursuit of a Fabergé egg are very funny. But it is the chemistry between the Davis couple that makes this comedy work.

The MPAA assigned a fitting R rating for Game Night, and this loosens constraints to deliver an effective comedy. Unlike the PG-13 Date Night, which was also a Dune Entertainment production, Game Night feels less constrained and not worried about offending moviegoers who have an aversion to crude jokes and grisly scenes that are not usually indicative of comedies. In no way is this movie a vulgar for the sake of being a vulgar entry in the black comedy drama. It is a well-crafted farce that will be one of HBO’s most entertaining Saturday night showings, licensed from a major studio. Think the retro screwball antics of the Marx Brothers, juxtaposed with the dark comedic elements of a Coen Brothers film, and this is analogous to the feel and delivery of Game Night.

A surprise cameo by an actor who portrayed one of the deadliest characters in cinematic/television history is not a gimmick and adds some depth and edge to the film.  This Saturday night, (October, 06 at 8:00pm) view Game Night. It will be fun!