This is the second of three posts that have been created by a guest writer for HBOWatch. If what’s offered is seen favorably then ANTHONY DAVIS will soon be a permanent writer for the site. Good luck, Anthony! 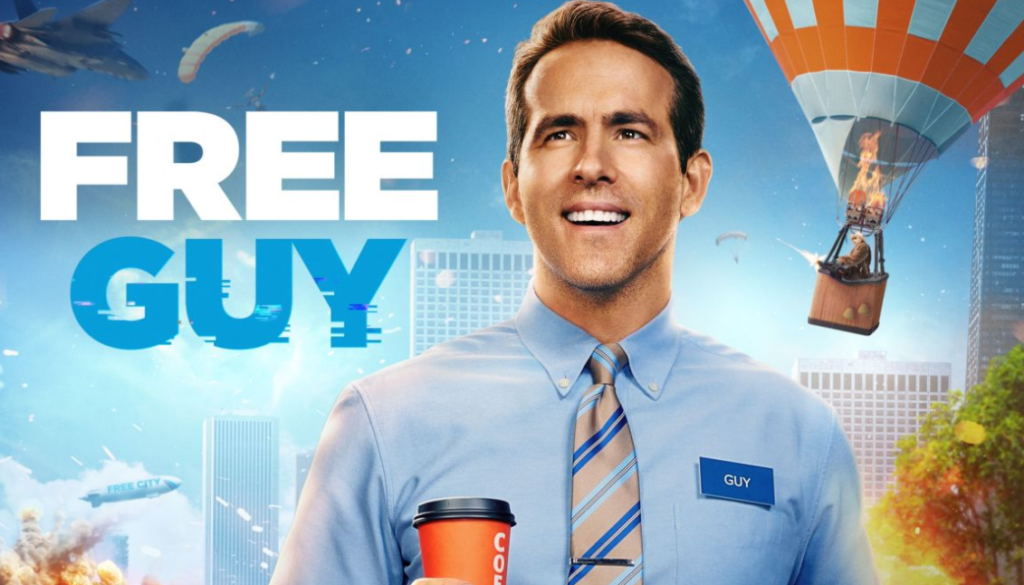 Is Free Guy a great movie and do you know why?

Free Guy is the feel-good PG-13 movie of the decade starring Canadian actor Ryan Reynolds; more on Canadians later. It has made its debut on HBO as of Saturday, February 26th. Ryan Reynolds plays Guy an average NPC (Non-Player Character) who lives in “Free City,” a video game similar to “Grand Theft Auto.” This action-adventure comedy was first delayed but it was finally released on August 13th, 2021 (Friday). With Rotten Tomato’s scores of 80 and an audience score of 94 there’s no doubt that people really liked this movie. Most people suspect that this movie is so popular because it’s filled with video game references, movie references, and it has an all-star cast. I agree all of these things help, but it’s the more subtle details that really make this movie so great. Let me tell you.

Let’s start from the ground up and talk about this movie’s director, Shawn Levy. If you’re like me you probably only know a handful of directors like Steven Spielberg, Quentin Tarantino, John Lasseter, or Peter Jackson. I didn’t know that I should add Shawn Levy to that list. Shawn has directed the Night at the Museum movies, Real Steel (which stars Hugh Jackman), and Stranger Things. Yes, this Canadian director is one of the brilliant minds behind Stranger Things.

Now that I have your attention let me direct you to the composer that you should know if you don’t already, Christophe Beck. Christophe Beck is a Canadian composer with so many movies under his belt that I’m shocked that I wasn’t already aware of him. Christophe has worked on Ant Man, Ant Man and the Wasp, The Peanuts Movie, R.I.P.D., Edge of Tomorrow, Paperman, and Frozen 2. Please if you haven’t seen Paperman do yourself a favor and watch it on YouTube for free. It’s a funny, cute, not even seven-minute story about how a guy really wants to meet the girl. Sound familiar? Christophe is now one of my favorite composers and he helps bring Free Guy to life. Since we talked about the composer let me give you a few notes on the screenwriters of this film as well, Matt Lieberman and Zak Penn. Matt and Zak have worked as screenwriters for a few movies you may have heard of like Scoob!, The Avengers, and Ready Player One. It is also an action-adventure sci-fi live-action movie, in the same vein as the one we’re talking about here, so it was natural to get Matt and  Zak to help with this movie as well.

Now that we’ve covered the basics let’s talk about the movie in a broader sense. Free Guy was made by 20th Century Studios and on their website, this movie is an Action-Adventure Comedy. Even Google only classifies this movie as an Action-Adventure Sci-Fi Comedy. After watching this movie more times than I’d like to admit I’ve got to say that it has pieces of Romance or Romance Comedy sprinkled throughout this picture. Spoilers ahead. Free Guy has a lot of Rom-Com tropes. It has the “Girl enters the Guy’s life and breaks up his daily routine”, “Guy has/knows what the Girl is looking for”, “Leaving your home and sometimes your friends to follow the Girl”, “The first date”, and “Love is the answer to a big problem” tropes. While Guy doesn’t technically end up with the girl, the building blocks are still there. The awkward moments, the little moments, the cute moments, and the kiss all add up to this being a Romance movie. It’s also not the first movie or even the first Adventure Sci-Fi Comedy to use these tropes. 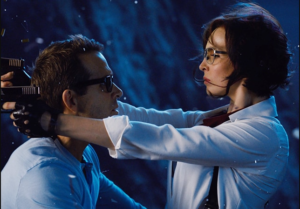 Wall-E is an Adventure Sci-Fi Romance Comedy very similar to Free Guy. We start off with Wall-E meeting Eve and Wall-E not doing his work as he follows Eve around. Eve on the other hand is looking for her “objective” and Wall-E just so happens to have what she is looking for back at his home. Wall-E leaves his best friend/pet at home and leaves his familiar world behind. Wall-E goes with Eve, practically alone, in a date-like fashion where they share a kiss. Wall-E, trying to help Eve complete her mission, is hurt and loses his memory where the solution to bringing back his memory is a kiss. As the movie ends, we are left with a world and a home greener than it was at the beginning of our journey. Free Guy and Wall-E, under the green screens and the animation, are structurally the same movie.

One of my only personal complaints with this movie is that Guy didn’t get his girl in the end. We are left with the fact that he is just a program and his dream girl wasn’t his own but another’s. His feelings for her weren’t real but his friendship with Buddy is. I’m happy for Guy and Buddy to be brought back together as friends to eat all of the free bubblegum ice cream that they desire, but what kind of message are we left with? Guy tells his love that he is a love letter to her from another. If Guy is a love letter, I feel like I was left with him as the movie closes on Free Life as if the story was unresolved. All of that love and sentiment was passed off like a baton without Guy having a love of his own. It could be that I was rooting for a “Frankenstein’s Monster’s wife” kind of ending but we got a pair of friends who walk into their future and we walk out on our exit. Maybe that’s why this wasn’t a Rom-Com and it’s just an Action-Adventure Comedy. This movie was a guaranteed hit with a wonderful director, an amazing composer, an outstanding cast, some fantastic screenwriters, and a tale as captivating as an Action Wall-E Rom-Com. This feel-good movie left me with some not so feel-good feelings but that just makes me more excited for a second Free Guy movie. The possibilities of a movie without a determined future and a setup of a promised Utopia are a blank canvas and if anybody could fill that in it would be our three beloved Canadian artists.

Yeah, what do you think, an unexpected rom-com or not so much? Watch Free Guy, a movie shared via the agreement with Disney-owned 20th Century Studios, across HBO’s platforms. 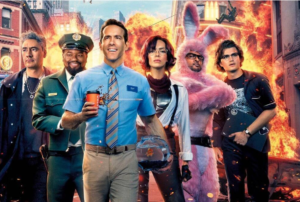