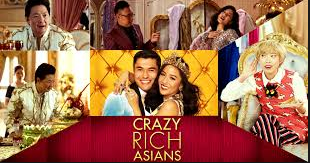 In retrospect, it seems that 2018 was the year that banished the myth that movies with representation wouldn’t attract audiences. The runaway success of Black Panther and Crazy Rich Asians proved 1) that the talent exists to populate films about the minority experience, and 2) that audiences crave and enjoy such films. Based on the 2013 novel by Kevin Kwan, Crazy Rich Asians went on to become the highest grossing rom-com in over a decade.

The main character of the film is Rachel Chu (Constance Wu), a successful economics professor at NYU. Rachel has been dating a young man named Nick (Henry Golding) for months, unaware that Nick is the heir to an extremely wealthy family abroad. When Nick is called back to Singapore for his best friend’s wedding, he asks Rachel to go with him and meet his family. As Rachel considers the trip, news of Nick’s invitation has already spread all over social media, thanks to distant friends of the family who overheard the conversation and sent word back home.

Once in Singapore, it becomes clear to Rachel that she was vastly unprepared for the cultural clash between Nick’s family and her own. They are separated by norms, as well as socioeconomic status. How will Nick reconcile the expectations of his family vis a vis their business empire with his desire to marry Rachel? How will Rachel navigate her successful career in the states with the needs of Nick’s family in Asia?

The “crazy” in the title serves not so much as a descriptor of the people, but as a descriptor of the wealth; they’re not just rich, they’re crazy rich. The film takes the modest protagonist into the lap of luxury and excess. It is a welcome surprise, then, that the film can feel so relatable. While studio heads were probably spending lots of time worrying about how a film about a non-white culture could attract audiences, what is truly surprising is that a film about crazy rich people could be so universal. After all, who hasn’t felt like an idiot in the company of people that are better dressed and with better manners? What woman hasn’t encountered regressive attitudes towards her professional ambitions? What family doesn’t have its share of unapproachable in-laws? 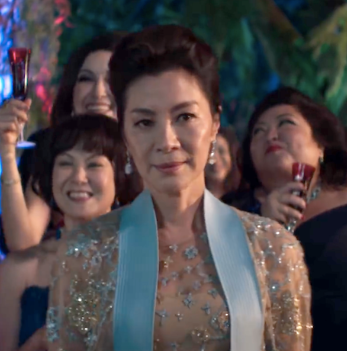 The film is light and full of joy and vibrant with humor and warmth. It is also chock-full of talent, particularly from a community that is vastly under-represented as dramatic/romantic leads on film. Constance Wu is compelling, sweet, and intelligent. She is the heart of the film. Henry Golding is a great romantic lead. If I had one complaint, it is that I think Golding should have been given more to do. Michelle Yeoh, as always, is FANTASTIC as Nick’s forbidding mother Eleanor. She speaks volumes without uttering a word. As a longtime fan of Yeoh’s work, I always welcome the chance to see her anew, and she does not disappoint here, giving her character a depth and complexity that she would have lacked in the hands of a lesser actor. Rounding up the cast is the hilarious Awkwafina as Goh Peik Lin, Rachel’s best friend, bringing a great deal of laughter to the proceedings.