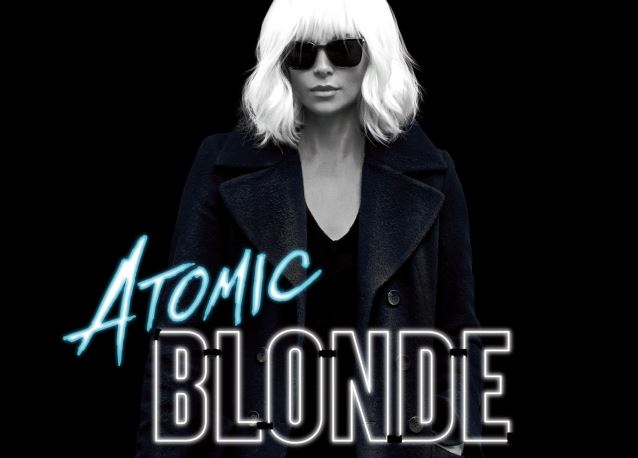 Lorraine Broughton (Theron) is the cold, tough as hell MI6 agent being grilled at the beginning of the movie. She is being questioned relentlessly by her boss, C  (Faulkner) and American counterpart Kurzfield (Goodman), of the CIA, with regards to a former agent, James Gasciogne, who was murdered. Then, there is a defector who went by the codename of Spyglass. Also of question is a 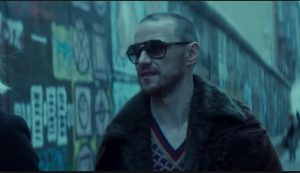 haywire rogue MI6 agent names Percival (McAvoy, pictured) and the whereabouts of a mysterious microfilm that contained compelling, if not, extremely damning evidence – naming names of operatives in both MI6 and the CIA who have possible gotten their hands dirty – and more than likely have done illegal things in the name of King and country. Oh yes, and the icing on the cake is the mysterious Satchel – a double agent that nobody has been able to arrest and bring in – which both irritates and embarrasses MI6.

Lorraine is one tough woman – her main specialty is hand to hand combat and escaping extremely hostile situations. Her demeanor is icy and haughty; she has nothing but contempt for the CIA counterpart in the room. Lorraine begins to tell her tale of woe: she knew James and had attempted to retrieve the microfilm. She ran into several complications along the way. First, she was ambushed by several KGB agents while landing in Berlin. Then she meets up with rogue agent Percival, who has completely immersed himself in the punk rock, anti-authority, full on rebellious underground Berlin scene, in an attempt to blend in with his fellow civilians. Trouble is he went a little too deep into that and you can’t tell if he’s still loyal to MI6 or if he’s become all-out rogue and loyal to himself, in it for a profit and quick to sell information to the highest bidder, no matter their nationality. One peculiar thing that happens is that when Lorraine visited Gascoigne’s apartment, she managed to rummage through all the clothing, files and furniture, only to find a picture of him and Percival.

Lorraine keeps her cool while dispatching the KGB agents. Her gut instinct tells her something’s off with Percival. In her flashbacks, we see just how much trouble she gets into while trying to locate where and who has the list. Constant assaults, enemy threats from virtually every angle and being kicked, punched and shot at take a toll on Lorraine. Two small strokes of good luck do happen. Is she making progress on her mission? 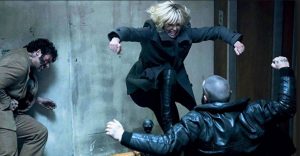 Finding Spyglass – the German defector who gave the microfilm to Gasciogne – and keeping him alive prove very difficult for Lorraine. After all, with limited resources and not knowing who to trust and where to go to for the right information can really play on your nerves and shake your confidence. Percival, for all his contacts, access to information and weapons, is suspicious of Lorraine and Lorraine doesn’t exactly trust him. The fact that Lorraine had met with a mysterious MI6 ally who went by the name of Watchmaker and Percival spied on her while doing so really makes you wonder who the hell is playing who and who’s the real enemy here? What are Percival and Lorraine hiding from each other and their superiors? Spyglass almost makes it out alive – but unfortunately becomes a casualty in this spy game. Harrowing car chase sequences, dodging bullets from every angle and a dark, throbbing soundtrack, complete with 1980s hits – such as “I Ran So Faraway,” “99 Luft Ballons,” and “Voices Carry” bring out such a strong sense of nostalgia. The fashions depicted in the movie harken back to a time where you enjoyed neon lighting, waterbeds, legwarmers, fishnet stockings and MTV videos. Yeah, what can I say, that added an appeal. Let’s get that trailer, shall we?

The movie literally turns out to be a case of spy versus spy – who can outwit, outmaneuver and survive the politically tense atmosphere of East Berlin, while getting their hands on that cursed list and revealing who the mysterious Satchel is and why it was so important to bring him down. That’s the funny thing about spies and the countries they work for; they’re supposed to remain solitaire; stone cold and get the job done. Any friendships or romantic entanglements only end in disaster. The mission is trying to find out highly valuable information before the enemy does – and use that information to your advantage. The other thing people have to understand is when you watch a movie like Atomic Blonde you have to expect an intense amount of action, political intrigue and betrayals from every possible angle.

I thoroughly enjoyed this movie and felt that Charlize Theron delivered the role with the icy flair of a woman who kicked ass, took names and got the job done, and then some. If you enjoyed her in Mad Max Fury Road, I have a feeling you’ll enjoy Atomic Blonde.