As a survivor, I knew I had to be in the right mindset going into this film. I knew it would be tough but when this came up, I was ready to try. They say men fear women laughing at them, and women fear men raping and killing them. So allow me to put a big trigger warning now, this review will discuss rape and it will not be an easy conversation. But this should be required viewing for anyone with dangly genitals. 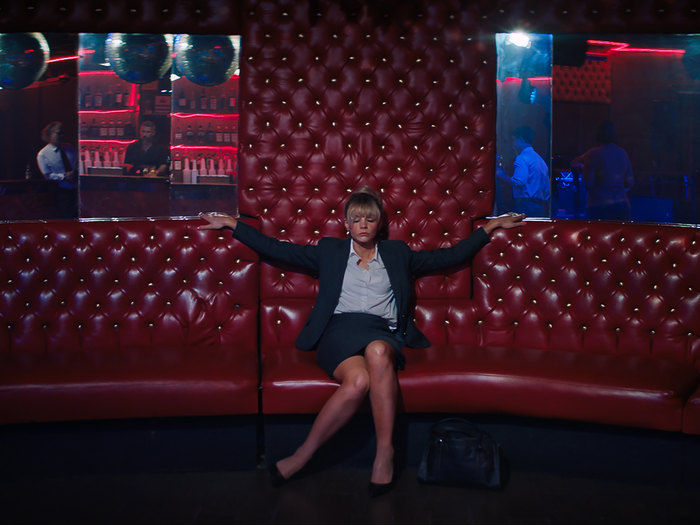 Director Emerald Fennell (Camilla Parker Bowles on Netflix’s The Crown) makes her feature film debut behind the camera and sets the scene immediately.  Wolves on the prowl looking for sheep. But no, it’s not all men, they say!  No, it’s the nice ones who say, “You’re safe” as they begin trying to rape you. But Cassie (Carey Mulligan, Drive, Doctor Who) isn’t a sheep.  Rape is all about power and control and Cassie lets them know exactly who is in control and exactly what kind of men they are. She’s just a med school drop-out turned barista, but she has an agenda.  A revengda, if you will.  Because when someone you love is hurt, you’d do anything to fix it. And Cassie lost her best friend.

The casting is absolutely exquisite.  Mulligan is the driving force and what a force she is.  But the litany of recognizable male faces appearing only to show their ugly natures was rather brilliant and reminded me of Brief Interviews with Hideous Men (2009).  Adam Brody, Christopher Mintz-Plasse, Sam Richardson, and her book goes on and on. Do you know what’s well done? That very real moment all women have experienced where a guy is super nice when he thinks you might f*ck him, but when that’s not happening he becomes psycho and you’re the “ugly, crazy b*tch?”? Well, she plays that out well in spades. Or guys desperately trying to keep a girl awake because they know if she falls asleep it is definitely rape, but if she’s still conscious he can argue it was consensual.  Lots of that too.  But there are more calculated efforts underneath it all getting to the heart of what happened.

Jennifer Coolidge and Clancy Brown star as Cassie’s parents who are concerned but also give her the subtle get-the-f*ck-out-of-our-house hint. Bo Burnham enters the picture as the cute, comedic relief. He’s good for Cassie. Brings laughter and joy back to her life. It’s quite a departure from his Netflix special Inside. Molly Shannon appears briefly as Nina’s mom, urging Cassie she needs to move on. Emerald’s director cameo gave me quite the giggles but I especially enjoyed her setting such a bubble gum, candy shop scene against the gritty, emotional sexual violence topic. The juxtaposition is well done and especially keeping the violence offscreen as it should be. That kind of gratuitous violence is not needed on screen and the sound effects worked plenty fine to establish what would have been a disturbing scene.

I’ll admit, I guessed part of the plot twist coming. But the ending completely caught me off guard. I’m not entirely sold on how it ended.  Rape is about power and control and in a sense, Cassie has regained that sense of control in her life. But to me, I would have wished more for Cassie. Because we do heal and we do lead healthy, beautiful lives once we get past our trauma. It doesn’t end there for all of us. And it didn’t have to end that way for her.  But what this film set out to do was spark conversations about consent and how you view your actions. This is why men especially should see this film and ask themselves how they can be a better ally in questionable situations. At the very least, Cassie gave me my new power move: uncomfortably staring down men who catcall you while you eat a donut.