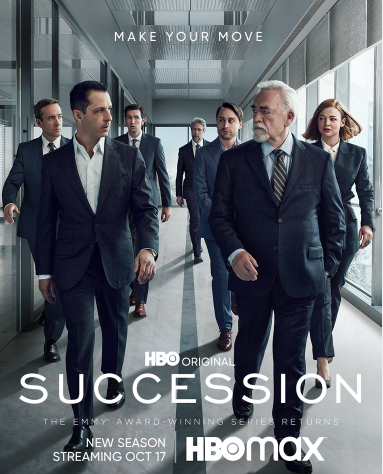 The magic date for the debut of Season Three of SUCCESSION is SUNDAY, OCTOBER 17 (9:00-10:00pm ET/PT). Make a notation of that. To help spell it the following official press release:

Created by Jesse Armstrong, the award-winning drama series, whose second season won a total of seven Emmys, including Outstanding Drama Series, will debut its nine-episode season SUNDAY, OCTOBER 17 (9:00-10:00 p.m. ET/PT) on HBO and will be available to stream on HBO Max.

Logline: Ambushed by his rebellious son Kendall at the end of Season two, Logan Roy begins Season three in a perilous position, scrambling to secure familial, political, and financial alliances. Tensions rise as a bitter corporate battle threatens to turn into a family civil war.

Unfortunately, we don’t have a full-blown trailer to go with this announcement; there was a teaser though. Also missing is an official Invitation To The Set clip but that could be because the production stopped/started a few times during the pandemic. Also not seen is a Season Two Recap. We sat out long enough that some kind of reminder to get us back into the mindset of where we left off would be good. We can mention though, our reviews of the series.

But at any rate, the continuation of the Roy family epic is almost upon us. Will you be in front of HBO Sunday, October 17? We sure will.