Overview: “What happens to a dream deferred?” asked Langston Hughes in his classic poem “Harlem.”The question is especially relevant within the walls of the Sing Sing Correctional Facility, where 1,700 men serve lengthy prison sentences, often for violent crimes.

In 1998, five former inmates founded the privately funded Hudson Link for Higher Education, which enables incarcerated men and women to earn a college diploma. Through Hudson Link’s partnership with Mercy College, Sing Sing prisoners are able to receive the same curriculum and diploma as on-campus students, with remarkable results: Hudson Link has a less than 2% recidivism rate among released graduates. The program draws a myriad of supporters, including rapper and actor Ice-T, business magnate Warren Buffet and singer and activist Harry Belafonte. This film reveals the transformation that occurs when inmates receive not only a college diploma but also a chance at redemption and a reason to hope.

Even though a college diploma can be a life-changing gift for prisoners, the effects go beyond their own personal journeys. Sean Pica, a former 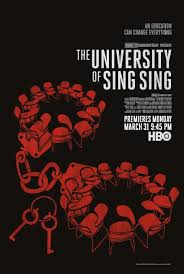 inmate and current director of Hudson Link, calls the program essential for successful reentry to society after prison. “Do you want them the same way they went in, or worse?” he asks. “Or do you want them changed and thinking about what they’ve done, and educated and looking to make a difference in their lives?” THE UNIVERSITY OF SING SING is directed by Tim Skousen.

Expectations: This documentary debuted right after the PRISON TERMINAL: THE LAST DAYS OF PRIVATE JACK HALL film which HBOWatch has already reviewed. Both pieces share a common theme – finding something positive in the negative environment that is a maximum security prison.  While the first film looked at a prison hospice system via the care of one terminal patient this one looks at higher education practices among inmates and how it has bettered them.

Inmates’ helping others is a rather clear concept of doing something positive while serving time, but the notion of educating yourself in prison is not so clear cut. Clearly we should see good examples of criminals educating themselves in areas that would have interested them out in public. The video preview seems to indicate that this is the case; that inmates are out to better themselves and not just get a criminal law degree so they can challenge their own case or sway a parole board. The questions and expectations arise on how this piece will present its case for criminals out to better themselves and to what end a college degree while in prison will do them.

Gut Reaction: This was a well done documentary that was presented in a way not quite expected. At first I thought we were going to seat in on the English class and then go into the lives of the students one by one from that class. Viewers do get that history but it was done in a way that does not confine us to the classroom or even the prison. 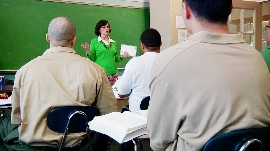 By including the families of the inmates in the interviews and having them help shape the stories of these prisoners it enriches the film. They all truly see the impact that a degree will give these particular students. They gain purpose, self esteem, knowledge and the belief that if and when they get out into society they are improved individuals. Even famous people, who end up attending the graduation ceremony, see the importance of this program – they see the benefit of actively making inmates into better citizens. Empowering a small percentage of inmates to start a new life is better than nothing.