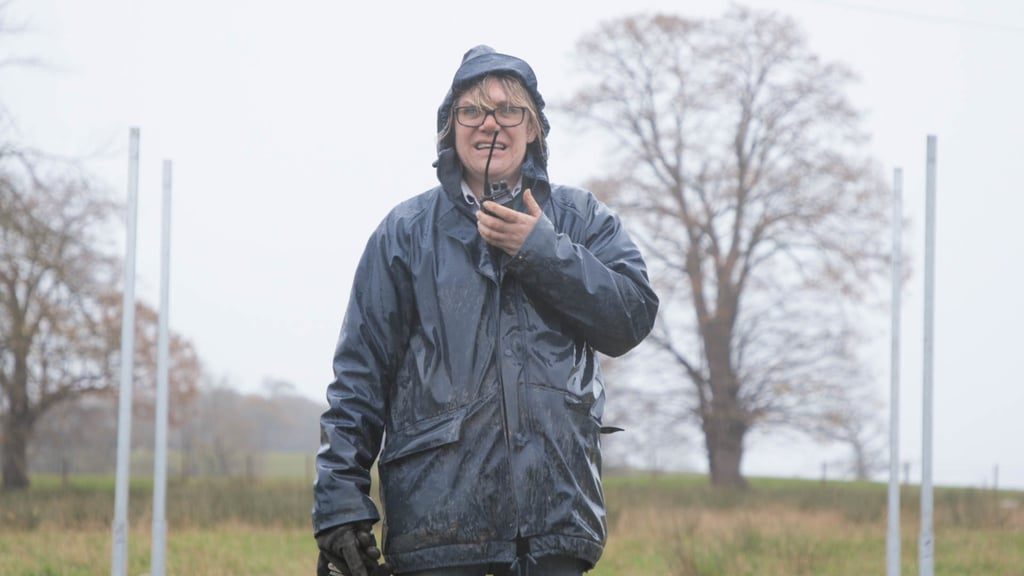 It’s a freezing cold night and beyond the bright lights of the production set is the expansive darkness of the Northern Ireland countryside. The comforting illumination of the catering van houses the charming, motherly provider of warm cups of tea and cheese toasties. Del, Head of Snow, waits patiently as actors and extras take their place. The husband and wife prosthetics team in charge of library and crypt walkers huddle together to keep warm. The production team, already tired, look on as the director tells the ‘dead’ extra’s to hold their breath so as to not capture the condensation from their mouths on camera. This is the first night of 11 weeks of night shoots to film the most anticipated, ambitious and exhausting battle in television history. The Last Watch takes you behind the scenes of the final season of the most watched television series ever made and introduces you to the people who have made this all possible.

Aired only two weeks after the finale, The Last Watch seeks to pull focus away from the bloodthirsty Game of Thrones fandom and shine a light on the people who have worked tirelessly to bring the world of Westeros to life. While many are still disappointed in how the story came to an end, this feature length documentary helps to end the whole show on a much more positive note. This is the finale we were waiting for. As well as learning some interesting facts about how the epic battle scenes were choreographed and created, we are introduced to the people who have been there from the very beginning, whose loyalty and dedication to the show equals that of the actors. We learn that they really are like one big family. 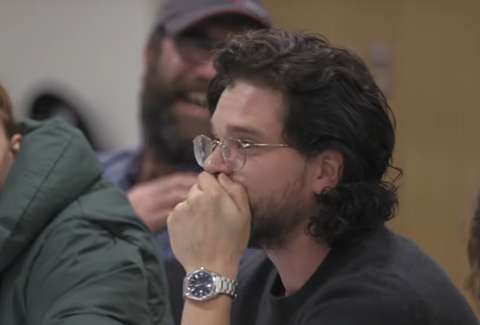 In one of the very few sections of the documentary where the actors are given any screen time, we see them all sit down for the table read of the final episodes. The script supervisor informs us that the actors are sent the scripts in advance but not all of them choose to read them before the table read. As she organizes the scripts according to actor and piles them up high on the table in front of their names, the famous faces arrive to take their seats at the table. We see an emotional moment for Conleth Hill (Varys) as Emilia Clarke (Daenerys Targaryen) reads her final line to him: “Dracarys.” He is undoubtedly visibly upset to learn that his Queen kills him so ruthlessly and later admitted in an interview with Entertainment Weekly that he took this very personally. However, the emotional blow from this table read comes as Kit Harington learns that he is the one to kill his beloved Daenerys. His incredibly real reaction to this is met by a sympathetic look of ‘I know’ from Emilia Clarke, who mirrors his despairing response. It’s interesting to see this raw reaction from cast members as they learn their characters fates, that they too were frustrated and heartbroken by writers decisions, even more so than their fans. Perhaps the sorrow came from knowing that their cherished characters deserved so much more than they were given.

It’s fascinating to see how big productions like this get made, as one person mentioned, each episode of this season required the same amount of work as a feature length movie but had to be completed in a fraction of the time. The scenes at Kings Landing in Episode Five, “The Bells” were not all filmed in the usual location of Dubrovnik, Croatia. In fact, due to the amount of fire and destruction that these scenes required, they built an entire replica of a Kings Landing street on a barren strip of concrete outside the Titanic Studios in Belfast. It took them seven months to complete and was finished to the highest degree of detail that walking around it would have felt like you were in Dubrovnik itself. Bernie Caulfield, the shows long running producer, walks around the set admiring the handiwork of the set dressers knowing that it will all be destroyed in a matter of minutes. Which it is.

Amusingly, despite the huge amount of secrecy that had to be maintained during filming, Belfast City Council decided to erect a huge Ferris wheel just a couple of hundred yards away from the new Kings Landing. An aerial shot shows just how close it was, but fortunately not tall enough to see inside the structure itself. 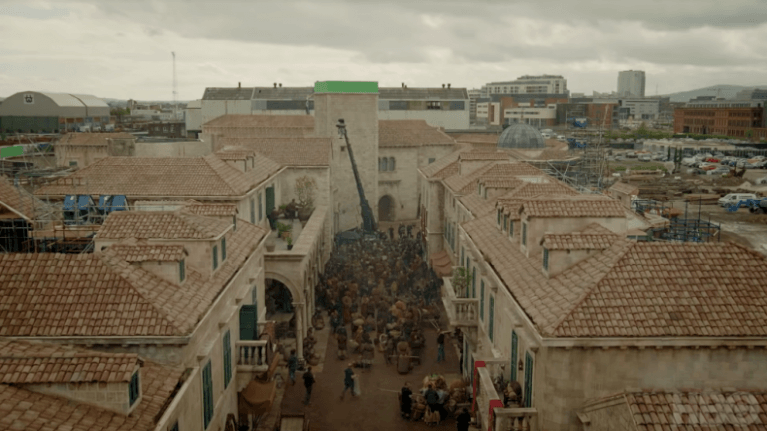 Speaking of secrecy, the documentary exposed the lengths they went to in order to maintain an element of mystery when filming. The scene in the finale at the Colosseum where Bran is elected King was filmed in Spain. Producers knew that the cast members would be spotted out and about when they weren’t filming, allowing fans to deduce which cast members made it to Kings Landing and possibly make assumptions about the story-line. To throw people off the scent, they had Jon Snow and the Night King flown to Spain who were not featured in these scenes, as well as bringing back the Waif and Jaqen H’Ghar. In a particularly amusing scene, we are shown Kit Harington and Vladimír Furdík arrive at a hotel with all the fans screaming for Kit and peering through the car windows. Kit, who has always struggled with the fame and attention that Jon Snow has bought him gives them all a quick wave and disappears inside whereas Vladimír walks over to the hoards of fans to ask them if they know who is without all his make up on. Of course they do and he revels in taking photos with them and chatting with them, while mimicking his characters signature move when he raises the dead. 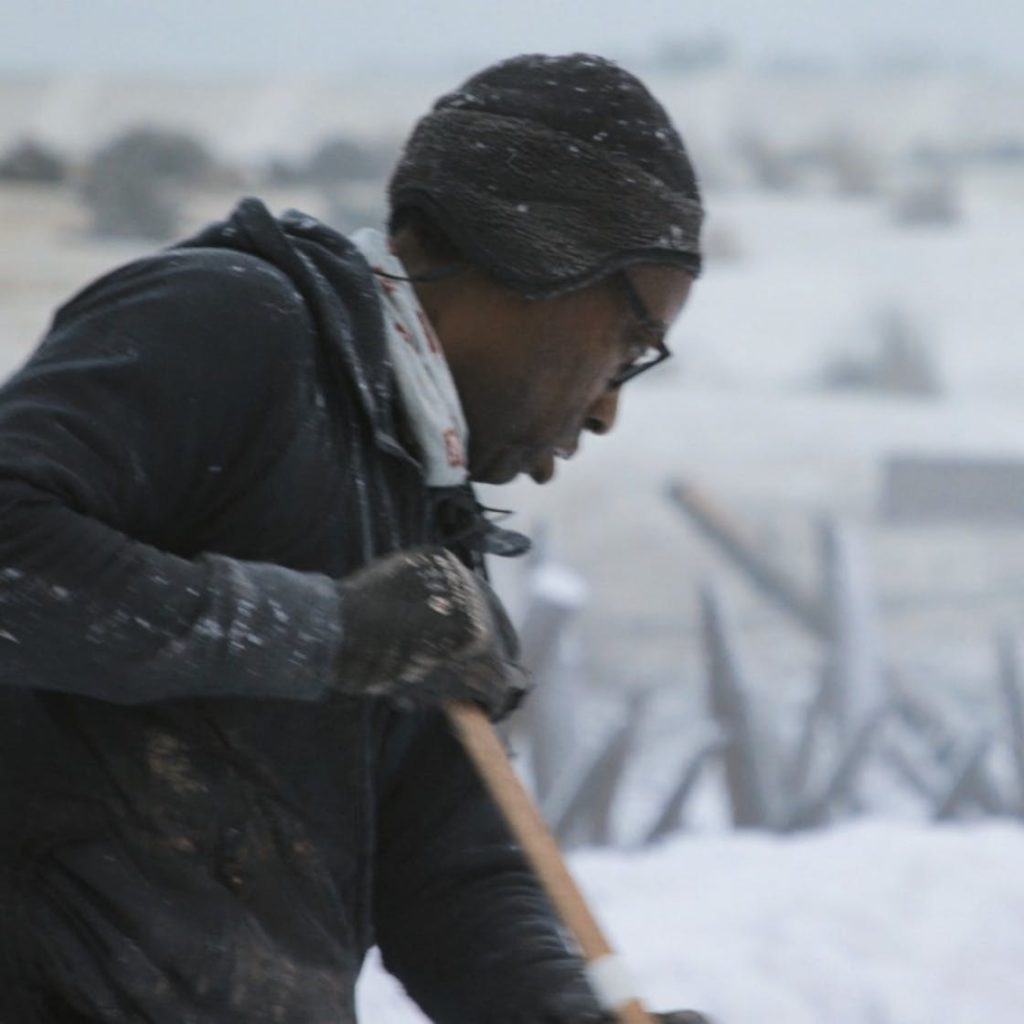 The documentary pays close attention to a handful of the amazing people who’s roles were essential to the shows success. Firstly, Del Reid, the Head of Snow. The Birmingham native, so humbled by his position, continually tells people ‘you could do my job’ and spends his hours laying and arranging fake snow. He arrives in various locations with huge bags of fake snow and special equipment to transform each site. Those from the UK will remember the dreaded ‘Beast from the East’ weather front that brought sub-zero temperatures to our shores for a prolonged period of time. When faced with huge amounts of real snow, Del’s operation is put under significant strain and he becomes frustrated at the demands of producers who are working to strict deadlines.

In addition to Del, we have Sarah and Barrie Gower the husband and wife duo who are in charge of prosthetics. Sarah, a timid but delightful lady, takes us around the set past huge shelves simply labelled ‘shoulders’ and to the set where the crypt and library walkers are shown to producers for the first time. She confesses to how nervous she is as she has worked hard on these designs and the prosthetics. She wants the producers to like her work. We see the extensive amount of work that she and her husband have to do, for every single walker and every single battle scar, they have to sit and dress the actors and extras individually every night for the shoot. We also see the toll it takes on her as she has an emotional video call with her daughter who she has been away from for a long time to work on this set. 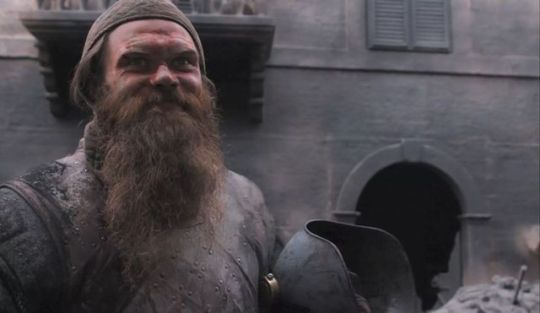 Finally, Andy McClay who is being heralded as the best thing about the whole documentary. Andy is one of the show’s most recognizable extras. The Northern Ireland native with a thick accent and no GCSE’s has dedicated the last five years of his life to being a King’s Guard for the Starks. He comes back every season excited and ready to go, full of life and eager to get filming. He is well known face to all the cast and crew. The fact that he might be actually featured in an episode is not important to him; he just wants to be there, he wants to be in Westeros. Andy’s genuine love of everything about the show is so unconditional, he doesn’t seem bothered by long working hours and is seen making jokes with other extras and crew members bearing the Bolton family sigil. His final scenes are with Kit Harrington at King’s Landing when Jon Snow confronts Grey Worm’s callous murder of Lannister soldiers in the streets. As Harington gives an emotional farewell speech to the cast and crew, Andy also unashamedly sheds a few tears and proclaims that the last five years have been the best five years of his life and he will forever be grateful of the memories he has. 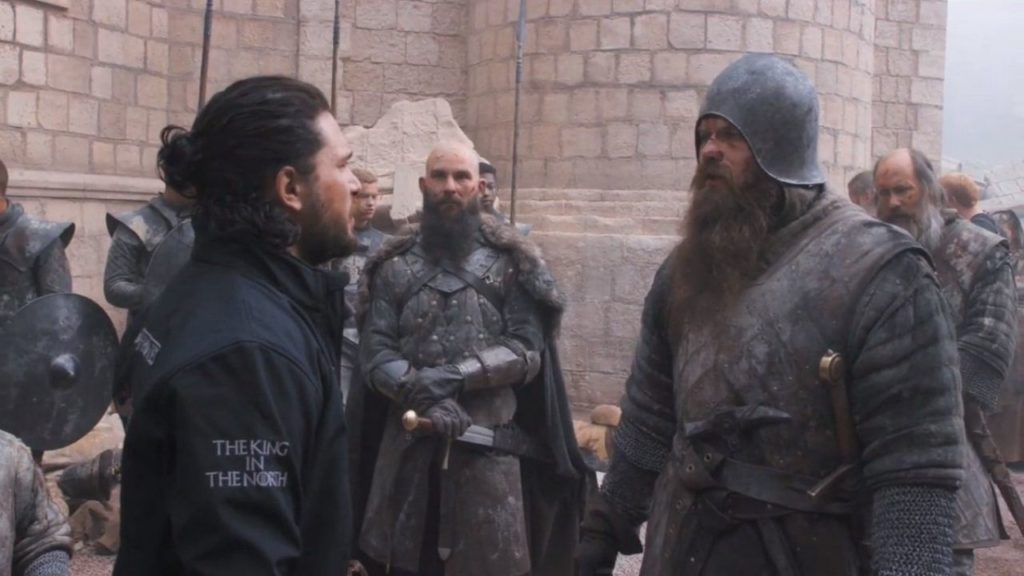 The thing to take away from this documentary is that despite the fact that story might not have ended the way you had hoped it would and that your favourite characters may not have got the ending they deserved, the people who made all of this happen are the people deserving of high praise. It’s a huge discredit to those whose tireless efforts have been met with waves of hatred from a ruthless fandom who are impossible to please. The amount of time and effort that went into this season is phenomenal and when you watch the documentary and see the scale of this production it’s a shame that there is so much negativity around how it all ended.

Get a taste of The Last Watch below: