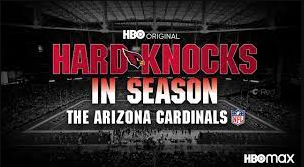 The “Big Three” of American Sports are Major League Baseball, the National Basketball Association, and the National Football league. The average career span of the aforementioned sports organizations is 5.6 years, 4.5 years, and 3.3 years, respectively. Certainly, an errant swing in golf can cause injury, but with the NFL there are a plethora of scenarios that can end one’s career. The Arizona Cardinals’2022 season has been plagued with minor to life-threatening health concerns.  Episode 2 chronicles the week leading up to and the game against defending Superbowl Champions the Los Angeles Rams. The Cardinals are without starting quarterback Kyler Murray (hamstring), safety Budda Baker is questionable for playing this week (ankle), and new father and Defensive End J.J Watt dealt with irregular heart activity. 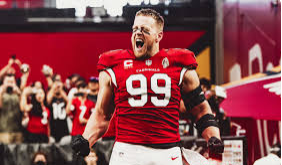 The Cardinals refuse to allow injuries to be an excuse for their lackluster performance thus far this season. Yet, J.J Watt (pictured, right) must carefully monitor his situation, for the young athlete has atrial fibrillation and had to have his heart “shocked” back into normal rhythm after medication and other procedures did not work. This was a terrifying ordeal for Watt, his wife, and fellow teammates. However, Watt is cleared by outside and team medical staff to continue playing football. Budda Baker, the metaphorical heartbeat of the team, carefully engages in practice, with the hope that his ankle holds up for the upcoming Los Angeles game. Baker is in high spirits and his mere presence is a guiding light for a team lost in shortcomings on the gridiron. 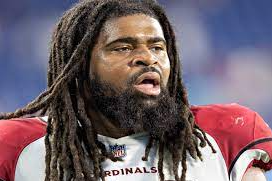 Sixth-round draft pick Lecitus Smith (pictured, left) is a rookie offensive lineman, who has openly stated he does not expect to have much playing time this season. However, his practice efforts and attitude are high caliber, and he is given the daunting task of facing off against Defensive End Aaron Donald. Aaron Donald is in his 8th year in the NFL and is not only considered one of the greatest NFL defensive ends but one of the greatest defensive players of all time. The Rams are still a formidable opponent, despite not playing like their 2021 selves. On game day, the Cardinals perform well decisively and offensively.  Second-string Quarterback Colt McCoy led the offense to three touchdowns. Rookie Lecitus Smith neutralized Aaron Donald’s defensive attempts, and a less than 100% Budda Baker had a 4th quarter interception that stopped a late Rams rally.  J.J Watt looked so sharp that it appeared that his health scare was a mere bad dream, albeit this remains a serious matter.

The Cardinals continue their playoff hopes against the San Francisco 49ers on November 21st and HARD KNOCKS IN SEASON returns on November 23rd at 10 PM ET on HBO.