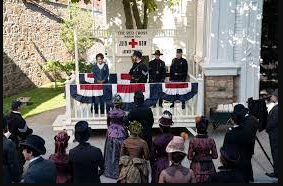 “Charity Has Two Functions”, opens with a young maid of the Russell House, attempting to aid Gladys in her escape from Bertha’s grounding (seems weird to use that term when writing about the 1880s). Gladys is caught by Bertha, who reiterates that the young woman is not allowed to interact with males that have not been vetted by her mother. George Russell also believes in the narrow-minded “parents know what is best” notion, albeit not as intensely as his wife. When George playfully tells Bertha that the couple has accomplished everything they set out to do before their marriage, Bertha kindly, yet authoritatively, responds that she will let George know when their goals are satisfied.

Although the mysterious backstories of Peggy Scott and Mrs. Chamberlain, and the true intentions of lascivious and motivated head maid Ms. Turner, have the most potential to elevate and carry the series onward, the Russell alliance is the nucleus of The Gilded Age. Alliance, not marriage.  The Russells may love each other, who knows.  Yet, it is more than the fact they sleep in separate bedrooms (common in Western Culture before the mid-20th Century), that this writer uses the word ‘alliance’. Bertha and George are from elite backgrounds and both are determined to surpass their origins. However, it is Bertha that is the architect of the planned oligarchy rule of greater Manhattan. Following the groundwork that his wife has already laid, George invites Gladys’s latest love interest over for lunch. The young man is initially treated quite well until George instructs him to only speak to Gladys in passing. Any violation of this order would result in the inspiring banker being blacklisted from anything business-related. George may have made the order, however, he did so to appease his wife. Time will tell if the series’ two most aggressive characters will have a Russell Civil War. 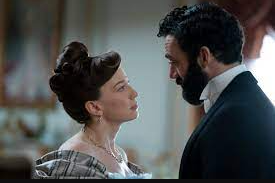 An unlikely group, Aurora, Bertha, Peggy, Tom, and Marian travel north to Dansville, New York to hear a speech by the founder of the American Red Cross, Clara Barton (pictured, right; played by Linda Emon). Although Barton is game to Bertha’s true ambitions, she is genuinely thankful for Bertha’s hefty donation to the Red Cross. The organization certainly needs it, as we see dozens of firefighters are being treated for burns at the Dansville Red Cross hospital. Widower Anne Morris (her husband took his life due to losing a trade war with George) is also in attendance. She is taken aback to see that everyone is very impressed with Peggy’s journalistic abilities. Even Bertha gives Peggy a genuine smile while she questions Clara Barton’s vision of the Red Cross. Anne was determined to keep 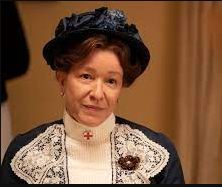 new money out of Manhattan and lost; losing not only a large share of her wealth but also her husband. She could be friends or at the very least cordial with young Peggy. Yet, she chooses to be narrow-minded. Anne nearly, just nearly, deserves to be a stepping stool for Bertha.

Later in the day, Peggy intentionally interrupts a kiss between Marian and Tom, most likely due to Agnes’s request to keep tabs on her niece. Peggy is no longer upset about Marian’s stereotyping a few weeks back, and the two strengthen their friendship. However, when Peggy literally states that she is carrying a heavy burden and says no more, Marian is put in a precarious situation:  How do I help my friend without intruding in her private life?

The episode concludes with news of a massive train wreck on the Russell line. The Russells and their railroad board executives scramble to address the crisis, with George stating that such tragedies are inevitable. The Gilded Age returns February 28, 2022, at 10pm ET on HBO.