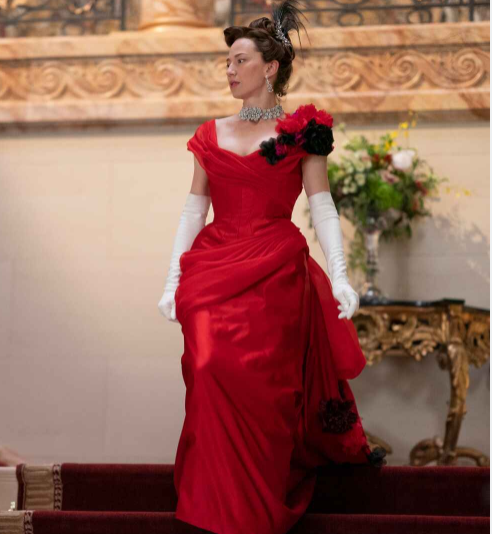 Previously on The Golden Age, Patrick Morris, a proud member of New York’s wealthy elite, killed himself as he faced ruin at the hands of New Money robber baron George Russell (Morgan Spector). As episode 4 opens, George asks his wife Bertha (Carrie Coon) whether he will be blamed. It’s not clear whether he feels guilt, or whether he’s worried about public perception. Bertha, ever the Darwinian, suggests that Mr. Morris’ weakness was his own fault. Nevertheless, George approaches Mr. Fane, one of Mr. Morris’ peers, and tries to make express his condolences. Of course, being a businessman, he also takes the opportunity to ask Mr. Fane for entry into high society using Mrs. Fane’s influence. In return, George will allow him to recover some of the money he has lost. Does George care about social acceptance the way his wife does, I wonder? Or does he endeavor to seek it only for her? As he pointed out in a previous episode, New York has enough New Money people to keep the family socialized among their own. The persistence with which the Russells seek acceptance by the Old Money elites seems to be about making a point, for both George and for Bertha.

As part of her social mobility, Bertha spends a lot of her time running running her daughter’s life. Despite the fact that Gladys is old enough to be out in society, Bertha insists on confining her. When she discovers that Gladys (Taissa Farmiga) has been speaking to young men behind her back, she moves to fire the complicit governess who allowed it to happen. Unbeknownst to Bertha, a greater betrayal exists within her home. Her maid Turner (Kelley Curran) has designs on social mobility, just like Bertha does, and she sees George as her ticket out of poverty. It is interesting to see how this story plays out when compared to a similar storyline in Downton Abbey. Will Turner succeed in seducing Mr. Russell? Despite her setbacks, she seems determined. It would make for an interesting development if she doesn’t succeed, given that George’s own characterization is ever more interesting and complex precisely because of the devotion he feels towards his wife. Can the robber baron be an honorable husband? 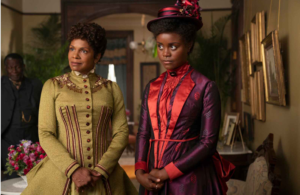 Meanwhile, Peggy (Denée Benton) had rallied from last episode’s setback. If one publisher won’t let her publish her stories under her own name, then she will simply try to find another. The New York Globe, a black periodical, expresses a strong interest in Peggy’s stories, as well as her political point of view. We even get to meet a real historical figure, the renowned journalist and editor of The Globe, T. Thomas Fortune (Sullivan Jones). An even more interesting development is the reunion of Peggy’s family in Brooklyn (not then a part of New York City). Before its current gentrification, Brooklyn was home to a great number of black residents, one of the places where the recently freed slaves of the Gilded Age went to find their fortunes. Many did find success and, like the white residents of Manhattan, they had great dreams for their children. Mr. Scott (John Douglas Thompson) has alienated his independent daughter, but it is clear that he wants her success, just as Agnes wants Marian’s.

In the most excruciatingly embarrassing scene of the episode, Marian (Louisa Jacobson) pays an unexpected visit to the Scotts in their Brooklyn home. She had made assumptions about their status, and brings a pair of old shoes to the couple, realizing only too late that they are a proud and well-off family. This further serves to anger Peggy, already irritated by her father’s interference in her life. Like so many people in vulnerable and dependent positions, Peggy has kept her mouth shut about Marian’s assumptions and privilege. Marian doesn’t notice how uncomfortable it is for Peggy to join her inside fancy shops, wherein Peggy is viewed with suspicion and contempt. Marian is kind hearted, but sometimes oblivious. Now, she is confronted with Peggy’s frustration and resentment. Though the episode was written by creator Julian Fellowes, this scene feels more like a contribution from Executive Producer/ Director Salli Richardson Whitfield and Executive Producer Dr. Erica Armstrong Dunbar, a historian and expert in the period, who works as a historical consultant on the show. As they discussed in the post-episode interviews, their knowledge of the black experience in the 19th Century means that Peggy’s journey is ever more accurate, in both the intimate/subtle and systemic/overt moments of racial discrimination. The presence of these women behind the scenes will be crucial to the representation of an often ignored population within the city: the black people who comprised its educated and entrepreneurial middle class. 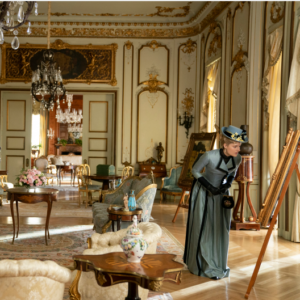 Another scene that stood out was the visit from the van Rhijn’s butler Bannister (Simon Jones) to the Russ home. Bannister goes across the street to recover Pumpkin, Ada’s lost dog. He is greeted warmly by his counterpart, Church (Jack Gilpin). Though Bannister is polite throughout his visit, he is very keen to address how “differently” (read: incorrectly) the Russell household is run. Mrs. van Rhijn, he implies, maintains the highest standards in her home, and subtleties like this make her superior to a gauche interloper like Bertha. Horrified, Church realizes that his mistress’ success with people like the Astors may depend on his own ability to grasp these nuances. Scenes like this are a delight for history nerds. How did the Americans eat in the 19th Century? How did the Brits? How does one display wealth in a seemly manner, without coming across as ostentatious and vulgar? These are the scenes that Fellowes excels at writing. They convey a lot about the two families, but also about the people who serve under them. What is Bannister’s motivation here? He has acted very decently thus far, so why the putdowns of the staff across the street? 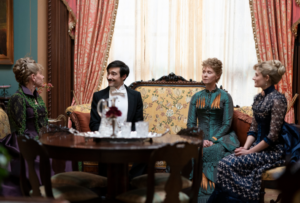 “A Long Ladder” is very much a transitional episode. It is not as urgent as Episode 3, but serves to show (as its title implies) the progress that each of the characters is making against their goals. The Russells are making their way into society at long last, Peggy is making her way as a writer, Marian’s suitor Mr. Raikes has also secured himself a seat among the richest members of Manhattan society. It is somewhat frustrating that Marian herself is so passive a character. The ostensible lead of the show, she seems to simply float from one scene to the next, without intent or purpose. Her good heart has been her saving grace, so far, but viewers will need more than that if we are to stick with her.

In the coming weeks, I think Marian will have some tough decisions to make. I look forward to seeing her emerge as a stronger character for it.