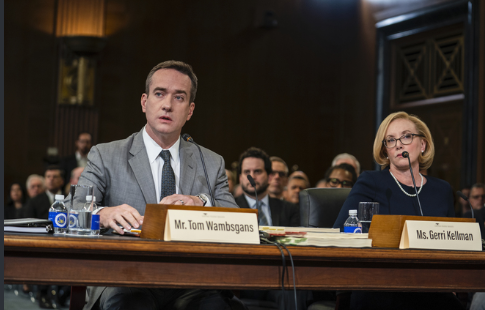 “I give Tom a ‘Bt’.  That’s bad plus terrible.” This is Waystar Royco’s Chief Financial Officer’s assessment of Tom Wambsgan’s performance during an inquiry at the nation’s capital. Logan Roy’s conglomerate is under fire for the mistreatment of staff and guests on Waystar’s vacation cruises.   Remember, that in Cousin Greg’s possession are documents that could destroy everything that the Roy’s have built.  However, the immediate threat is Senator Gil Eavis, a former ally of Shiv Roy. 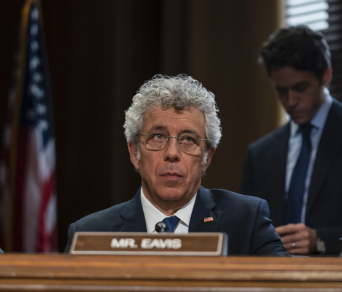 After Tom’s abysmal attempts to fend off Senator Eavis’ (Eric Bogosian, pictured) line of questioning, the rattled in-law loses his composure and accuses the Roy family (even his wife, Shiv), and the board of directors of making him the blood sacrifice for the company’s atrocities. Although no one has sympathy for the ten minutes of embarrassment that he endured, this accusation is denied. Eavis is seemingly in control of the situation. He has a key witness inbound to deliver damning testimony of horrific work conditions onboard Waystar cruise ships during the 1990s. He even causes the usually undeterred Roy Logan to stumble and mumble during the proceedings. Roy’s ace-in-the-hole and newly appointed CEO Rhea Jarrell, is apprehensive and later outright refuses to get involved with issues that far preceded her appointment as CEO.  Who does Roy have to alleviate this shit show?  No other than his often mistreated off-spring.

At the Washington DC proceedings, Kendall Roy gives a stirring testimony on the effectiveness of capitalism, a mini-speech that would have done Atlas Shrugged author Ayn Rand and Fox News pundits proud. Roy makes valid points 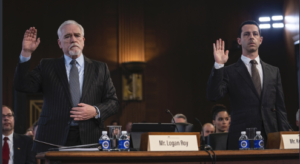 that the smart but liberally biased Eavis simply wants to discredit a news source (Waystar acquired ATN news from the Pierces) that is self admittedly for conservative viewers. Kendall valiantly and truthfully states, “All media is for profit, this is not a state media. You would need to go to China or Russia for that.” In Turkey, Roman Roy and two Waystar security personnel are literally held hostage with other foreigners in a hotel lobby. After that situation has cleared, Roman seemingly secures a verbal agreement from Turkish investors that they will put up enough capital to allow Waystar to pay off investors and go private. A privately held Waystar can easily sidestep arbitration and have fewer stakeholders to appease. Right outside of the capitol building, Shiv Roy intercepts the key witness before she is summoned.  Shiv is unequivocally honest with the witness, telling her that she and Senator Eavis are using her for their best interests. The witness ultimately acquiesces and does not testify.

The Logan children have saved their father and his legacy this round, but the penultimate episode of Succession leaves us with the lingering question: Who will be the blood sacrifice? Waystar investors are not about to have their money flushed down the toilet by dwindling stocks courtesy of these scandals. Will one of the Logan children take the fall? Will it be Tom or one of the board of directors? Or will it be the man himself, Logan Roy? I am expecting a hellacious finale’ that will rival last season’s deadly car crash.