Zeitgeist. It’s a word that critics often use to access whether or not a story captured the spirit of the times. During a 2015 interview with the Financial Times, former Home Box Office CEO Richard Plepler said to “never mess with the zeitgeist.” Mr. Plepler was specifically speaking on two HBO projects:  Game of Thrones and Here and Now. Regarding the latter program, it was helmed by Alan Ball, the Academy Award-winning writer of American Beauty, and the audience & critically acclaimed series Six Feet Under and True Blood at HBO. With a track record of crafting appealing shows about a California based family running a mortuary, and vampires and humans attempting to co-exist in Louisiana, certainly, a drama about an Oregon family living during the present day would be feasible.  Alas, this was not the case of the one season of Here and Now, which heavy-handedly attempted to depict an America under the influence of the current President’s administration. Merely mirroring and ripping from the headlines does not capture the Zeitgeist. Crafting a journey that plays with our fears, joys, and uncertainties do capture the Zeitgeist. That is an understanding that the creator of Years and Years, Russell T. Davies (Queer As Folk and Dr. Who),  fully grasps.

Our story begins in the Spring of 2019, with the Lyons family watching an evening political program at the home of the family’s matriarch, Muriel. Vivienne Rook of the independent Four Star Party is controlling the conversation with outlandish commentary on world events. Some of the Lyons family admire Rook’s utterly unfiltered vernacular, while others find her rude and unimpressive. Like any family, the Lyons have their differences amongst themselves, yet there is no question about the unconditional love that is in their inner circle.

The members of the family (some BBC veterans) are: 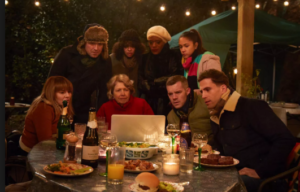 Episodes 1-2 cover a six-year time span, which features mostly plausible but extreme future events; events that are happening around the globe and within the Lyon household. Stephen and Celeste’s parenting styles are what is indicative of most parents, yet they are fairly open-minded. Therefore, when the couple hears that Bethany is trans, they are shocked but immediately comfort their daughter and give their full support. Bethany is grateful but explains that she is happy being a woman…she doesn’t want to be human anymore. It seems Bethany has been receiving nanotechnology implants and eventually seeks to upload her entire subconsciousness to a Cloud. Celeste blows a fuse over the situation, but not nearly as big of a fuse that Edith Lyons experiences off the coast of a fictional Chinese man-made island. In the real world, there is an ongoing dispute over the Spratly Islands, with many countries laying claim. The U.S supports Taiwan over ownership of the Spratly Islands, but to the chagrin of China. Years and Years creates a similar scenario, but let’s hope that it does not escalate to what happens in the fictional realm.  Edith is in the Pacific protesting the dispute when a brilliant flash happens in the distant horizon.  The US has just nuked the disputed island. 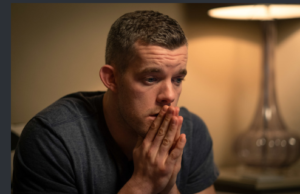 Episodes 1-2 (CONT’D).   Years and Years avoids the cliché’ of having our characters navigate a war-torn post-apocalyptic world. Instead, we have financial collapse and the near disbandment of the provisional UK Government. Vivienne Rook (Emma Thompson)takes full advantage of the vulnerable nation and taps into voter’s darkest fears to win a seat in Parliament. Daniel Lyons (pictured & played by Russell Tovey) has left his husband for an immigrant man (Viktor) that he met while performing his housing officer duties. The Brexit scenario is heightened in this series, with many immigrants being herded like cattle into internment camps, awaiting deportation. Daniel desperately seeks methods to keep Viktor in the UK.  Irony and financial disaster hit financial gurus Celeste and Stephen, and the couple loses nearly 1.5 million pounds after the markets collapse. The couple and their two children sell their home for a fraction of its original costs and movie in with Muriel. 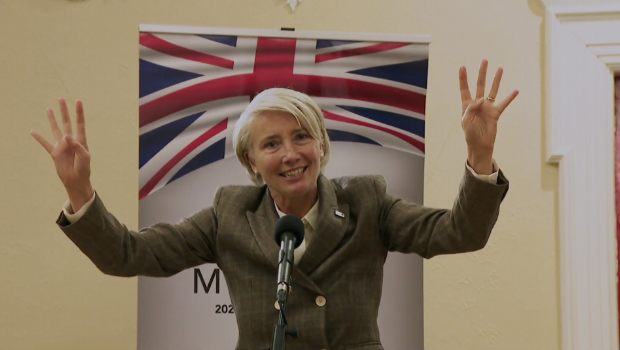 Episodes 3-4.  The year is now 2027, and Rook is now Prime Minister. Celeste and Stephen have separated, due to Stephen coping with the world’s problems by having an affair. I appreciate that the writers do not focus on Celeste and Stephen being an interracial couple, rather just a couple dealing with this insane new world. Bethany continues to move toward being trans-human but slows her momentum after one of her friends has a gut-wrenching eye transplant that goes horribly wrong. Yet her embedded technology proves useful when she assists her aunts Edith and Rosie with a daring rescue of Viktor from one of Rook’s internment camps, camps with conditions that are hidden from the general public. Rook is the person to blame for the conditions, but it is no other than Stephen Lyon who had Viktor imprisoned. Daniel had drowned a few years earlier while assisting Viktor to seek Asylum in France. Stephen was even more distraught than the other heavily morning family members and took action by turning Viktor over to the authorities.  Edith and Rosie not only managed to extract Viktor but with the help of their pseudo robot niece, they exposed the conditions of the camp and have Rook arrested on charges of crimes against humanity.

Episodes 5-6.  In 2034, the elderly Muriel is still alive and well, as are the other Lyons, with the unfortunate exception of Daniel and Edith. We already know that Daniel passed heroically for Viktor, but Edith was exposed to the radiation of the thermonuclear blast from the first episode.  She is now in the fourth stage of an unspecified cancer. But thanks to advances into technology, and the Nano experience of Bethany, it is heavily implied (albeit not confirmed) that Edith’s mind was uploaded to a water molecule-based Cloud. The preview of the final installment follows.

The story arc of Years and Years has been repeatedly compared to that of Black Mirror, the dark anthology from HBO’s number 1 competitor, Netflix.  The comparisons are certainly warranted, yet I find an even more stark similarity to the Bulletin of the Atomic Scientists’ Doomsday Clock model. Years and Years inches towards the literal end of the world throughout the series, yet the doomsday clock is dialed back with every unselfish act of its characters. The direct references (Trump’s Presidency and Brexit) from the current times can exist and still have this series work. Earlier it was mentioned that Here and Now (we are not intentionally bashing this series, it was a noble attempt), did not capture the Zeitgeist. This was due to that series picking a political side to align itself. Years and Years is a dire warning that being too left or right winged will bring forth fanatics that will exploit fears and create a hierarchical system that benefits no one, regardless of their political leanings.

Home Box Office and The British Broadcasting Corporation have had masterful collaborations in the past. Notable, the ‘sword and sandals’ historic epic Rome, is a prime example of how two broadcasters separated by 3,500 miles of ocean, can assemble a team of writers, directors, thespians, and production crew to make quality television. It appears that the duo is not running out of steam anytime soon with the release of the critically acclaimed Gentleman Jack (a second season has been ordered), and the upcoming highly-anticipated His Dark Materials.

Years and Years is far-fetched and reaches a little beyond it grasp at times, but it has everything that viewers of BBC and HBO programming expect.

This miniseries or limited series, whichever applies, has concluded but all six installments can be witnessed on HBONow/Go at your leisure. We say, take a look at Russell T. Davies ponderings on one way our future years could play out courtesy of the Lyons family.