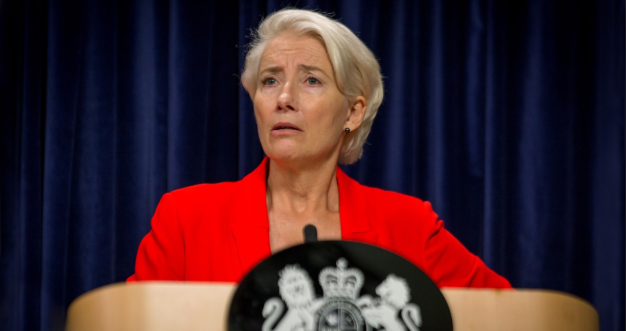 It seems we let one by without nary a comment. We have mentioned that Emma Thompson was starring in an HBO limited series a couple of times and never really followed up. Now, here we are about to see YEARS & YEARS debut and all we can say is that yes, time does fly by, doesn’t it? The official trailer has now dropped and the six-episode run debuts in June, so I guess we’d better get up to speed on this.

The six-part limited drama series YEARS AND YEARS debuts MONDAY, JUNE 24 (9:00- 10:00 p.m. ET/PT), exclusively on HBO. YEARS AND YEARS follows the members of one family as their complex lives converge on one crucial night in 2019 when Britain is rocked by political, economic and technological advances. Rory Kinnear, Russell Tovey, Jessica Hynes, Ruth Madeley and Anne Reid star, along with Emma Thompson, who plays an outspoken celebrity turned political figure whose controversial opinions divide the nation.

Each episode propels the family a year or two ahead, following the lives of Daniel (Tovey), Stephen (Kinnear) and his wife Celeste (T’Nia Miller), sisters Rosie (Madeley) and Edith (Hynes), Gran Muriel (Reid) and the family’s children, as they navigate a world made quite unstable.  Here is the trailer –

It is nice to see Emma Thompson in a big lead role here as she has had smaller bits in other works lately (Men In Black: International, King Lear). Based on that trailer it is not a locked-in serious drama but packed with a healthy dose of wit and humor all while delivering a strong message. The series, when it is all done, is going to tell us that if you stay on task with your family & life that as the years pass on you will find that you’ll make it through just fine. That is something we all hope for. More directly it says to take charge of your life and destiny. Fight back, plan ahead, challenge the wrong and the end result will be the same; as the years march on you’ll be okay.

Again, that is YEARS AND YEARS Monday nights for six weeks beginning on June 24 at 9:00pm ET.