With a mix of facts and quotes, we set you up now for Season Three of Jesse Armstrong’s HBO Original series SUCCESSION. It debuts its nine-episode season SUNDAY, OCTOBER 17 (9:00-10:00pm ET/PT) on HBO and will be available to stream on HBO Max.  It explores themes of power and family dynamics through the eyes of patriarch Logan Roy (Brian Cox) and his four grown children, Kendall (Jeremy Strong), Siobhan (Sarah Snook), Roman (Kieran Culkin), and Connor (Alan Ruck).

Interestingly, members of the cast seem to feel the tale is not so much about the battle for power but leans more into the family dynamics of the Roy clan that is at the heart of it all. From the show’s latest TCA panel, we share these quotes:

“I almost never consider the fact they’re wealthy, it’s never something that pops in my mind,” says Kieran Culkin, who plays Roman Roy. “I think that’s because Roman’s always known and I’m only seeing it from his [perspective].”

“Is money the corrosive thing, or is it the lack of love and affection?” said Matthew Macfadyen, who plays Tom Wambsgans in the show.

“I agree with Kieran, it’s not something I find I ever think about — the wealth feels incidental to me and window-dressing in a way,” added Jeremy Strong, who stars as the Roy family heir apparent Kendall Roy. “[Psychoanalyst Carl] Jung had said that where love is absent, power fills the vacuum. I think about love and power, and where they are on the indexes. But power not in the monetary sense, but as something that compensates for love that drives us in different directions sometimes, which feels quite Shakespearean to me, actually.”

“I don’t think it’s different from any family,” chimed in Brian Cox, who stars as patriarch Logan Roy in the series. “It’s very much a reflection on how human beings live, of how we shift and how we dance.”

Now knowing that, will you take S3 differently?

Season three finds Logan in a perilous position, scrambling to secure familial, political, and financial alliances after he was ambushed by his rebellious son Kendall. After Kendall’s impulsive decision to expose the company’s sprawling scandal, the family is left for each to contemplate their future. Tensions rise as a bitter corporate battle threatens to turn into a family civil war, with the Roy family navigating the looming question of who will take over in a post-Logan world.

Next, we have a peek into the first three episodes. Note that HBOWatch will be reviewing the season weekly. 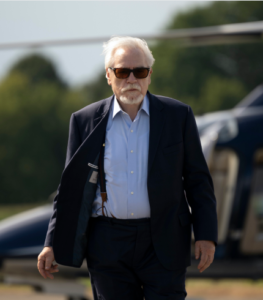 If by chance you want a deeper dive into the season, may we suggest the podcast attached to the series? There are already eight installments about the show curated for your listening pleasure. HBO.com tells us that – The official SUCCESSION podcast features conversations with the major players from the award-winning HBO series. Hosted by Roger Bennett and produced by Bennett and Jonathan Williamson, the multi-part podcast dives deep into the razor-sharp writing, dynamic performances, and high-powered family drama that drive the series. Featuring interviews with the cast, each episode provides a behind-the-scenes look at the show’s most memorable moments and more as Bennett revisits the series with those who know it best.

The companion podcast for SUCCESSION Season 3 will launch after the season premiere with a new host, journalist Kara Swisher. Each week, Kara will unpack real world events that echo the saga unfolding on screen. She’ll dive into family dynamics, capitalism run amok, and power unchecked with top journalists, writers, thinkers, psychologists, and cultural critics, as well as some of the people who made the show. Podcast episodes will be available each week on all podcast platforms, right after the latest episode airs.

So, are you a part of this family (of HBO watchers) or are you not?