The entertainment world is becoming more and more so an international affair every day. As previously underdeveloped countries catch up with the “first world” in terms of technology and tastes, media companies such as HBO and Netflix have struggled to expand internationally at a similar pace.

We’re often asked “Is HBO available in the UK?” or “Is HBO Go available in Asia?”  It’s tough to keep track of all of these changes to HBO’s international expansion plan but below we’ve amalgamated all of the information into one place for all of the Game of Thrones, Sopranos and True Detective fans out there across the globe.

Let’s start with a handy map showing where HBO is available (in one form or another) around the world: 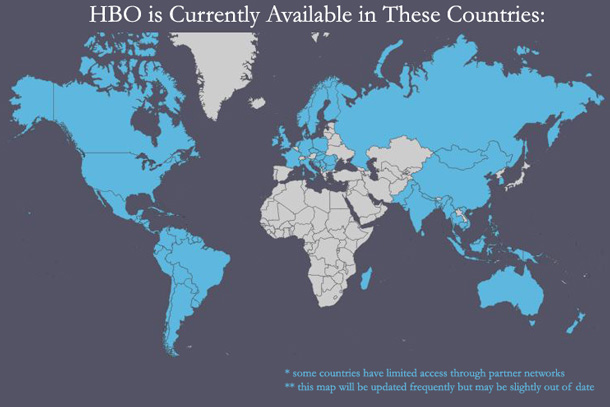 We’ll update this map and page with additional info as we have it.  Each country has a different process for obtaining HBO’s content.  As we research each country or as news breaks we’ll add it here. Stay tuned.

HBO Max is available in most countries:

HBO’s homeland! There are lots of ways to watch HBO online here. You could try Sling or AT&T TV NOW if you don’t want to go the cable route. It’s actually the fastest and cheapest way to get the service.  Here’s a quick path to Sling:

And one for AT&T TV NOW for the details:

HBO in the UK (England & Scotland)

The United Kingdom, including England and Scotland is one of the easiest places outside the US to gain access to HBO programming. While there isn’t an “HBO UK” per say, all HBO content can be viewed through Sky Atlantic. Sky and HBO have made a deal running through 2020 that allows this.  Though there is no HBO Go app available in the UK, Sky Go is something UK citizens should look into.

Though Ireland is often mistakenly thought of as part of the UK, it isn’t!  In the Republic of Ireland some HBO programming has been made available on TG4 (www.tg4.ie). Whereas in the UK all HBO programming can only be found on Sky Atlantic UK

HBO Latin America covers most, if not all of South America and Central America including Mexico, Argentina, Chile, Costa Rica, Peru and many more.  To sign up check out their official page.  This also covers countries in The Caribbean such as The Cayman Islands, The Bahamas and Puerto Rico.  Also known as HBO OLE, Brasil is another country covered by this iteration of HBO though a Portuguese feed is also available from HBO Brasil.

HBO Asia covers a massive swatch of the human race including both India and China. But it also includes huge countries such as The Philippines and Indonesia as well as around 20 other countries.  This is a direct company, owned by HBO as opposed to a licensing deal as with the UK’s Sky network. Check out their massive site for more information about signing up in your country.  HBO Go is also available in Asia.

HBO Canada is a weird situation. Thought there is an official HBO Canada it is not owned by Time Warner and includes content from other, rival networks such as Showtime as well. The company is more of a licensing deal with HBO than anything else with the right to use the HBO brand name.  HBO Go is available in Canada through The Movie Network.  You’ll have to check with your cable provider in Canada to get the full details up north.

In 2012 HBO launched a service in the Nordic region that included an HBO app like HBO Go that could be subscribed to without a cable subscription. Seen as more of an experiment than anything, this paved the way for eventually doing the same in the United States.  Check out their official site if you live in one of these countries for more details.

Simply called HBO Europe, this official HBO channel is, indeed owned and operated by HBO.  Covering 15 European countries, HBO Europe is one of the biggest offshoots of the Home Box Office internationally. Their official site should help you get set up if you’re living in Eastern Europe.  Oh, and HBO Go is also available in these countries as well!

HBO inked a deal with Amedia in Russia to bring its content to the people of that nation. Details on how to sign up and what content is available are sparse here in the USA but check out this official looking page if you’re in Russia and interested in getting HBO access.

In 2014 HBO inked a deal with Sky Italia locking down access to the Home Box Office’s most popular content. Sign up for Sky HD in Italy and you should be able to view HBO programming easily.  It’s unclear whether or not HBO programming can be viewed with Sky Go in Italy but watch this page for more.

HBO in Australia and New Zealand

Showcase, a company owned by Foxtel, Rupert Murdoch’s company is the only way to get HBO legally in Australia. You can sign up here for those Aussies interested in getting HBO.  Sky Movies is the place to grab HBO in New Zealand.

More countries to be researched in the coming weeks or as news breaks.  Stand by!