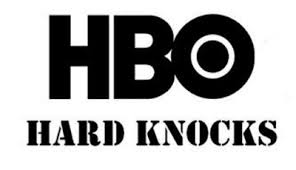 Of course, that title question goes along with the question, is there going to be a 2020 NFL season? Well, they are talking bout it. An all-clear for training camp has been granted, but come game time the seats will likely be empty in stadiums across the land. So, with those plans in motion perhaps HBO Sports can be there for the unique season ahead?

Well, the chances may be slim for a few reasons and one big one is that the developing contingency plan may include a truncated Preseason. That period of training will be shortened as organizations look to allow more pre-Preseason prep. Players who have been restricted, due to the pandemic, to exercise and keep fit for play may now need a longer lead-in time to get in playing mode. Team physicians may also step in to make sure that lead-in time is adequate to get players up to health before actual work begins and all that could shorten training and shorten the opportunely for HARD KNOCKS to get inside the team. You also have to factor the safety of a production crew as well.

Ben Koo of Awful Announcing wanted to get some clarity on the issue so he reached out to HBO to ask about the status of the show. HBO’s reply was simple – “NFL Films and HBO Sports are deep into planning for this season’s edition of Hard Knocks. We don’t have any information to share right now.”

Now, we thought that the decision-makers of NFL Films & HBO Sports had already declared that two teams would get the scrutiny. In this post, we announced that the Rams and the Chargers would get that honor since they were sharing a spanking new stadium this season. Now, either that was never official or due to the novel situation we are under the production pulled back and are now weighing different options or perhaps, not making a big play quite yet at all. Perhaps they will assess as time goes on and be ready at a moment’s notice scramble to a gridiron

HARD KNOCKS is not the only HBO show to face such a production dilemma as of late, but when you want the simple joy of some good football in your life it is tough. We will see what happens in the months ahead.