If nothing else, Game of Thrones is known for its carnage. People seem to drop like flies and their deaths can come at any moment. We’ve already discussed the most dangerous character in season one, but which of these characters do you think will kill the most people in season two?
Now, just because you’ve read the book doesn’t mean you’ll have the right answer… HBO deviated from the storyline in season one and they have said they will be making some changes in season two, as well!  So, who will rack up the most on-screen kills?  Here are my three guesses as to who will kill the most people in the second season of Game of Thrones: 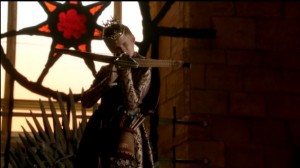 3. Joffery Baratheon
It’s obvious from his actions in the first season that Joffery is power drunk. He already has some blood on his hands from the deaths of Mycah and Ned, though it wasn’t his sword that made the killing strokes. As I’ve said before, he has no one to stand in the way of his wrath.  Even worse, he seems to show no remorse for his actions. This lack of guilt leads me to believe he can only get worse in season two. He also blazons a rather deadly new toy in the previews we’ve seen, which is… comforting.
2. Arya Stark
Unlike Joffery, Arya has actually seen blood on her ‘needle.’ But that doesn’t mean she relishes the idea of killing. She killed the stable boy in season one out of fear and self- preservation. Little Arya isn’t ruthless, but based off her line in the second preview for the new season, “Anyone can be killed,” she ain’t screwing around. She’s seen some terrible things and she realizes that no one is going to show her any more mercy than the next person. Arya is prepared to do whatever is necessary to survive. 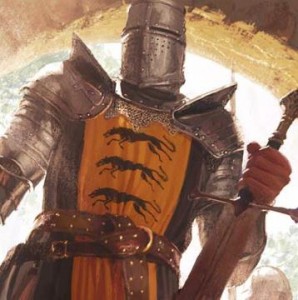 1. Gregor Clegane
Speaking of no mercy… Last we hear of the elder Clegane, he is rampaging across the Riverlands. He and his men were reported to be burning crops, raping and murdering without cause and generally terrorizing the common folk. While Ned set Beric Dondarrion out to bring the ‘king’s justice’ to Gregor and his men, who knows how long it could take to find them? And would they be able to stop them? I think Gregor Clegane is going to come out with the highest kill count in season two of Game of Thrones.
Who do you think will kill the most people in the second season of Game of Thrones? And please be courteous to those who haven’t read!! If you’re referencing material outside of season one/book one, please mark it SPOILERS!
Lauren is an avid reader and writer, wannabe world traveler and hip hop dancer with non-profit fundraising super powers. Also known to exaggerate her snowboarding abilities and relate her every life experience back to Game of Thrones. Follow her on Twitter! @LG_enius