We first met Melisandre in S 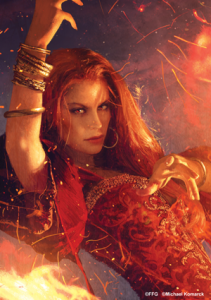 eason 2, in the company of Stannis Baratheon, the “rightful King.” She is a Red Priestess of the Lord of Light. The Lord of Light is a deity that has not spread deep into Westeros. Melisandre, who hails from a county called Asshai in far east Essos, came to Dragonstone to preach this faith to an area that had heard little of this religion. She manages to convert Stannis, as well as most of his household, to her religion.

First impression of her conjures thoughts of Roman Catholics attempting to convert Pagans. She is mysterious and new. She seems to possess magical powers unseen in this part of the Realm. She prays with her new converts and is prophetic.

As the series progressed, we learn there is a lot more to this woman than what meets the eye. She is emboldened as an advisor to Stannis. This is an oddity from what we have seen as far as most royal counselors are concerned, considering this is a female from a foreign land.

Melisandre interjects during War Council between Stannis’ bannermen, stating Stannis needs no lords for support as the Lord of Light is behind him. At this point, one may think she is just a religious zealot. Shortly after this, Maester Cressen offers her (poisoned) wine in apology for his interruption at the Lightbringer ceremony. When he drinks, he is affected almost immediately by the poison but Melisandre drains the cup unaffected and watches Cressen die while her red jeweled choker glows eerily around her neck. Now is when the viewing audience starts wondering “who is this woman exactly”? What is with her powers?

She wields her tongue magically; convincing Stannis she can give him a son, an heir, when his wife has given him no sons. She speaks of seeing his victory in the flames and talks Stannis into “giving all of himself” to the Lord of Light. Though Stannis manages to mention his wedding vows, he finally succumbs to her words and *ahem* “gives himself” to her. 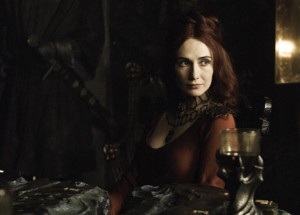 Melisandre has positioned herself in a place of great power. She councils her king, gets him to change faith, encourages him to cheat on his lady wife with her and question his own internal decisions. This begs the question, what would Stannis do if she was not part of his council? Would Stannis be who he is if Melisandre was not in the picture?

When Stannis and his entourage, consisting of Davos, Melisandre and several guards, ride to the coast of the Stormlands to parley with Renly Baratheon, Renly makes fun of his big brother’s relationship with the priestess. She does not play the demure woman who allows the “big boys” to hash out who should sit on the throne. She instead tells Renly to bend his knee to Stannis, demandingly. Not particularly the way a respected member of a king’s council should act. Before she takes her leave from Renly, she warns him “The night is dark and full of terrors”. She does this without Stannis’ direct knowledge and puts her in an interesting light. We wonder what she really means by her threats to Renly.

Melisandre tries to work her magic on Davos, though he seems impervious of her flirtations. He doesn’t trust this priestess for many reasons. First, religion is an issue. Davos is one of the few of Stannis’ men who have not converted to her faith. Secondly, she seems to always say exactly the opposite of Davos. They are the proverbial angel/devil on the shoulder. One whispers reason while the other whispers conviction. One is not sure which choice is better.  Lastly, Davos lost his son/s at the Battle of Blackwater in the siege. He blames Melisandre for this because she is the one who coaxed Stannis into going into this battle, yet she stayed behind. One could say she was obeying her King. However, she has not portrayed the obedient subject so far. It is hard to imagine she would obey anyone other than her Lord.

While it seems the audience has a love/hate relationship with Melisandre, she continues to be an interesting character. Season three should show more of her “magic” and dig deeper into the background of the Red Priestess. Everyone wants to get to the top of the chaos ladder.

Take a look at the rest of our ongoing Game of Thrones character profiles here.