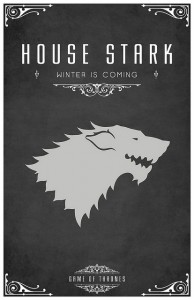 The Stark’s story started so peaceful and simple, Ned and Cat raising their five children (oh, and Jon) inside the safety of Winterfell’s walls. But season one left every one’s favorite Northern family scattered and battered. Their ever lovable father, Ned, was robbed of his honor and of his head, which seemed to set the Stark plots on fire.

The mother of the Stark brood was finally reunited with one of her children, after a failed arrest of Tyrion Lannister. She found her eldest, Robb, in the midst of a war started to avenge his father. The northern men have had some victories, the greatest of those, capturing the King Slayer, Jaime Lannister. Robb also finds himself named ‘The King of the North’ by his banner men.

Meanwhile, Sansa is fighting her own battle in King’s Landing. In the wake of her father’s execution, she has been labeled a ‘traitor’s daughter.’ This label puts her in a precarious situation with her hosts, the Lannister’s. She has to keep her grief and hatred in check in order to keep herself alive.

Arya has escaped capture from the Lannister’s with the help of Yoren, a recruiter of the Night’s Watch, but she also needs to convince her fellow travelers that she is boy. Yoren already helped her transform into ‘Arry the orphan boy’ by chopping off her long hair, but can she hold up this guise for the duration of her long journey? 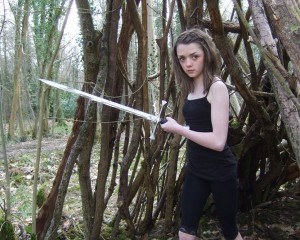 Bran and Rickon remain at Winterfell, cared for by Maester Luwin in the absence of their Mother, Catelyn. Both miss the presence of their siblings and mother, and are frightened by the loss of their father. While the youngest boys’ stories seem calm in comparison to the other Stark’s, their futures seem as uncertain as their siblings’.

On the Wall, Jon is struggling with the loss of his father. He also finds himself torn between the oaths he swore to the Night’s Watch and his urge to be with his half-brother, Robb, during his war. With the help of his new friends, he makes the decision to stay at the wall with his ‘brothers’ and his duty. But his distance from the war does not distance him from danger. We last see Jon heading through the gates, north of the wall, and into unknown risk.

HBO certainly left us hanging. Which Stark storyline are you looking forward to the most in season two of A Game of Thrones?