A new year is upon us and in a few short months BIG changes will arise. We might not recognize HBO when it is all said and done, so we better enjoy it while we can. Many have already felt that what HBO stands for is a bit blurred these days but for now, it seems to be holding strong amidst the turmoil. We have some interesting content to consider for January 2023 but be warned, this is one of the skimpiest postings ever.

The sojourn of Joel & Ellie begins

Plus, a chance to see what’s on THE MENU

Oh, and the USMNT and USWNT!

HBO Original Series: The nine-episode first season of the HBO Original drama series THE LAST OF US debuts SUNDAY, JANUARY 15 at 9:00 p.m. ET/PT on HBO and will be available to stream in 4K on HBO Max. This series takes place 20 years after modern civilization has been destroyed. Joel (Pedro Pascal), a hardened survivor, is hired to smuggle Ellie (Bella Ramsey), a 14-year-old girl, out of an oppressive quarantine zone. What starts as a small job soon becomes a brutal and heartbreaking journey as they both must traverse the U.S. and depend on each other for survival. 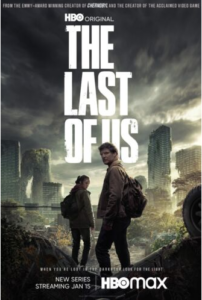 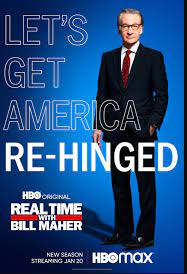 orphan in Boston; and Jeffrey Pierce (The Last of Us video games) as Perry, a rebel in a quarantine zone. Lamar Johnson guest stars as Henry and Keivonn Woodard as Sam, brothers in Kansas City hiding from a revolutionary movement seeking vengeance, and Graham Greene guest stars as Marlon and Elaine Miles as Florence, a married couple surviving alone in the wilderness of post-apocalyptic Wyoming. Ashley Johnson and Troy Baker, the voices of Joel & Ellie from the source material, also star.

After a brief Holiday break, REAL TIME WITH BILL MAHER will be back at it on FRIDAY, JANUARY 20 (10:00 p.m. ET). It will be the beginning of the show’s 21st season, but Maher best be careful because if Zaslav thinks he has been on too long, he could get the ax. You never can tell around here anymore.

Original Series Exclusive to HBO Max: Bare pickings but some interesting titles, I guess. VELMA, uploading THURSDAY, JANUARY 12, is an adult animated comedy series telling the origin story of Velma Dinkley (Mindy Kaling), the unsung and underappreciated brains of the Scooby-Doo Mystery Inc. gang. This original and humorous spin unmasks the complex and colorful past of one of America’s most beloved mystery solvers. Developed by Charlie Grandy, it stars executive producer Mindy Kaling as the voice of the titular character, with Sam Richardson, Constance Wu, and Glenn Howerton voicing Shaggy, Daphne, and Fred, respectively.

If you are into competition series then you have THE CLIMB. It is a visually arresting and life-changing adventure that represents the foundations of rock climbing and the exploration of the human spirit. Hosted by Jason Momoa, in this all-encompassing competition, amateur climbers are put through a rigorous 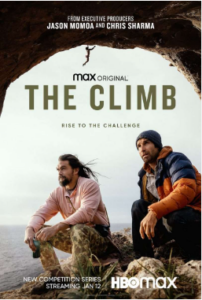 series of mental and physical challenges, utilizing some of the most intimidating ascents in the world to crown the world’s best amateur climber with a prAna sponsored climbing career and a $100,000 cash prize. It also uploads on THURSDAY, JANUARY 12. If you are into interview shows then WHO’S TALKING TO CHRIS WALLACE? Is for you. It returns doling out conversations as of FRIDAY, JANUARY 06. It will run for its second 10-week season, featuring one-on-one interviews across the spectrum of news, sports, entertainment, art, and culture. Highly anticipated guests this upcoming season include Jessica Alba, Brian Cox, Ina Garten, Hugh Jackman, and many more. The adult animated show YOLO launches its second season beginning MONDAY, JANUARY 23. It is subtitled SILVER DESTINY.

HBO International Titles: THE BIG SOIREE (El Gran Sarao) is an improvisational show about two Latino actresses, Silvia Abril and Toni Acosta, who share the same birthday. They decide to throw a grand party when they turn 50 and hire groundbreaking and daring event organizer, La Puta Suegra to make it all happen. It hails from Spain and uploads FRIDAY, 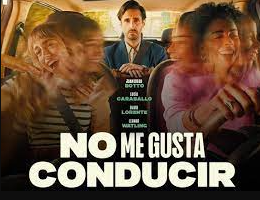 JANUARY 13. Also on FRIDAY, JANUARY 13 is I DON’T LIKE DRIVING (No Me Gusta Conducir). It is a Spanish comedy television series created and directed by Borja Cobeaga. The plot follows Pablo Lopetegui, a misanthropic university lecturer in his 40s believing himself to be morally superior to others who need to get a driving license. To that purpose, he joins a driving school, meeting with one of his alumns at the university (Yolanda), and driving teacher Lorenzo, among others. Meanwhile, Lopetegui also maintains a very amicable relationship with his ex-wife.

HBO Theatrical Movies: There are always a number of older movies HBO shuffles on and off the site. Some they want us to take particular note of, for some reason. For January they point out the following: 2018’s THE NUN, 2014’s HORRIBLE BOSSES 2, and 2014’s BLENDED. Older movies than those include 1986’s CROCODILE DUNDEE, 1988’s CROCODILE DUNDEE II, and 2001’s CROCODILE DUNDEE IN LOS ANGELES.  As for theatrical debuts, they are only prepared at this time to list one title – THE MENU. How hard is it to prepare a full slate monthly, really? Last month they slipped in BLACK ADAM well after the month had started.

Debuting on HBO on SATURDAY, JANUARY 07 (8:00-9:50 p.m. ET/PT), and a few days earlier on HBO Max, is THE MENU. Ready for dinner? A couple who travels to an exclusive restaurant on a coastal island gets the shock of their lives when they see what’s on the menu in this delectably horrifying satire starring Ralph Fiennes, Anya Taylor-Joy, Nicholas Hoult, Hong Chau, Janet McTeer, Judith Light, and John Leguizamo. Directed by Mark Mylod; written by Seth Reiss & Will Tracy. I bet you can guess what is being served, right?

Movies Exclusive to HBO Max: The streamer is not pushing and promoting any exclusive titles to lead off the new year. Again, it thinks we are all just 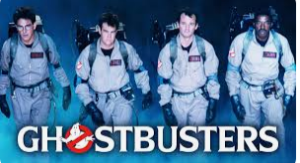 satisfied with the rotating cycle of movies from the library. Some titles it will upload as of SUNDAY, JANUARY 01 include 1962’s LAWRENCE OF ARABIA, 1996’s WHEN WE WERE KINGS, 2009’s PLANET 51, and 2013’s AMERICAN HUSTLE. You can also binge on GHOSTBUSTERS from 1984 and its 1986 sequel GHOSTBUSTERS II followed by all three Chapters in the JOHN WICK franchise.

HBO Documentary Films: HBO is holding onto its position that it sits idle on the documentary front for the first month of the year. We will have to wait to see what drops in February and take the opportunity to catch up on some great titles in the library.

HBO Max Kids & Family: We can offer a few titles for the younger set this month. They can usher in the new year with new episodes of WE BABY 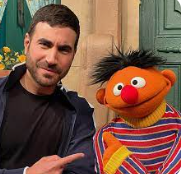 BEARS uploading SUNDAY, JANUARY 08, and SESAME STREET: MECHA BUILDERS arriving TUESDAY, JANUARY 17. Speaking of the Street gang, on SESAME STREET in January (with new episodes every Thursday from CARTOONITO) we see Big Bird joining the “Happy to Be Me” Club; Elmo making a doggy obstacle course for Tango; a celebration of Bubble Week on the Street and Big Bird’s aunt making her first appearance on the Street all the way from Hawaii. Actor Brett Goldstein (Ted Lasso) guests this month and it’s not his first appearance.

Changing gears, how about gathering around to catch BATMAN AND SUPERMAN: BATTLE OF THE SUPER SONS? This direct-to-video animated DC film is uploaded on TUESDAY, JANUARY 17. In it an iconic supervillain named Starro takes control of Batman and Superman leaving the superheroes’ children, Jonathan Kent and Damian Wayne, to save them. Hell, I didn’t even know they had offspring!

If you like animated DC fare then watch it because HBO Max is pulling a number of this type of content in January. Leaving the streamer are AQUAMAN, BATMAN: THE BRAVE AND THE BOLD, JUSTICE LEAGUE, and JUSTICE LEAGUE UNLIMITED. 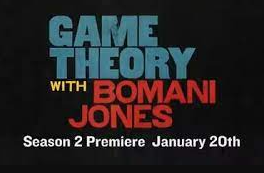 HBO Sports: Returning for some sports commentary this month is Bomani Jones. The HBO Original late-night series GAME THEORY WITH BOMANI JONES returns for its second season with a new day and time on FRIDAY, JANUARY 20 (11:00-11:30 p.m. ET/PT). New episodes will debut on subsequent Fridays on HBO and be available to stream on HBO Max. It is not made clear how many installments there will be but the first season offered a total of six. REAL SPORTS WITH BRYANT GUMBEL embarks on a new year of sports coverage with the January debut. No date is set but I’ll suggest TUESDAY, JANUARY 24 (10:00-11:00 p.m ET). It will be season 29!

HBO Max is getting into sports with not one, but two soccer matches in January. That’s right, HBO Max and TNT will be the home of live soccer game coverage for the U.S. Women’s and Men’s National Teams starting in January 2023. The first opportunity to stream live sports on HBO Max in the U.S. will be on TUESDAY, JANUARY 17. It will be USWNT VS. NEW ZEALAND at 10:00 p.m. ET. That follows with a second matchup on FRIDAY, JANUARY 20. Then on WEDNESDAY, JANUARY 25 it is the men’s turn with USMNT VS. SERBIA.

The @USWNT and @USMNT are coming to TNT and HBO Max starting in January! pic.twitter.com/2KjlIDCqkK 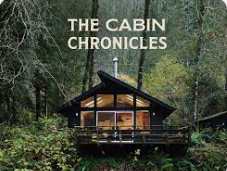 Other Movies & Shows: Importing over from Discovery+ are two titles: Season three of IN WITH THE OLD (on 01.11-23) follows designers, builders, and old-home enthusiasts in small towns and big cities across America as they reimagine and transform abandoned structures by preserving their historical integrity while giving them a new purpose and CABIN CHRONICLES (01.20.23) takes a look into the architecture and design behind cabin owners’ beautiful homes. Also, imported over from THE CW is the third and final season of DC’s STARGIRL.

Last month’s answer – We offered the one-word clue “Cordyceps” last time. It is the fungus that turns humans into Clickers and Bloaters. If you don’t understand all that you haven’t played or watched THE LAST OF US.