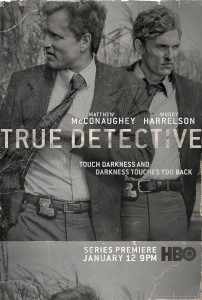 Production Company: Steve Golin’s Anonymous Content which is behind such movies as Eternal Sunshine of the Spotless Mind, Being John Malkovich and Babel.

Written By: Nic Pizzolatto.  He has written a short story collection and was a writer for AMC’s The Killing. He is listed as the creator and sole writer for TRUE DETECTIVE.

Directed by: Cary Fukunaga. His movies of note are Sin Nombre and Jane Eyre. His version of the Jane Austen story starred Mia Wasikowska of HBO’s IN TREATMENT.

Cast: The show lists over twenty-five actors but only nine of them appear in all eight episodes. They are Matthew Mc Conaughey as Rust Cohle; Woody Harrelson as Martin Hart, Bruce Elliott as Trustee Levi; Randall Gonzalez as Detective Gonzalez; Tory Kittles as Papania; Michael Potts as Det. Maynard Gilbough; Eric Price as Detective Shinn; Madison Wolfe as Audrey Hart and David Stephen Mitchell as the Promise Keeper.

Details:  In 2012, Louisiana State Police Detectives Rust Cohle and Martin Hart are brought in to revisit a homicide case they worked in 1995. As the inquiry unfolds in present day through separate interrogations, the two former detectives narrate the story of their inve 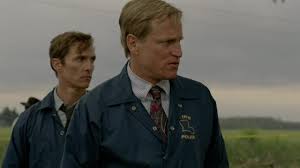 stigation, reopening unhealed wounds, and drawing into question their supposed solving of a bizarre ritualistic murder in 1995. The timelines braid and converge in 2012 as each man is pulled back into a world they believed they’d left behind. In learning about each other and their killer, it becomes clear that darkness lives on both sides of the law.

Written and created by Nic Pizzolatto and directed by Cary Fukunaga TRUE DETECTIVE stars Woody Harrelson as Martin Hart and Matthew McConaughey as Rust Cohle. The series also stars Michelle Monaghan (Mission: Impossible III) as Maggie, Hart’s wife; Kevin Dunn (VEEP) as Major Quesada, the supervising officer in 1995; and Tory Kittles (Sons of Anarchy) and Michael Potts THE WIRE as Dets. Papania and Gilbough, who are the investigators now probing Hart and Cohle for answers.

Ordered: One Season comprised of eight episodes. Since the show is meant to be an anthology series similar to FX’s American Horror Story each season will be a different case with different characters. The episodes of the premiere season are 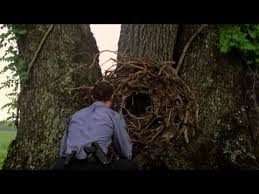 Premiere Date: The show will air Sunday nights beginning January 12th. It is an hour drama replacing the short-lived LUCK. HBO must want a solid drama to air in late winter. It will air 9:00pm – 10:00pm ET followed by Season Three of GIRLS and the new series LOOKING (which doesn’t premiere until 12.19.)

Status: Heavy promotion of TRUE DETECTIVE has been witnessed via a stand-alone promotional website at darknessbecomesyou.com. There are several video clips to be found there. The HBO Channel section of YouTube has some different ones still. All shed light on the dark and disturbing casework ahead for the detectives and sets the tone for the show quite nicely.

HBOWatch Links: Though there has not been much in the way of exposition about he show on our site, or any site really, there are again plenty of video clips. Here is what HBOWatch has given you.

We first brought the production to the site with a piece back on 05.02.12. Then over a series of three different posts we detailed the shaping cast list. The first Tease appeared onsite on 06.10.13. We talked about a premiere date in anticipation of the first Trailer  which surfaced on 09.08.13. Then the barrage of clips rolled in. We looked at five alone in one post on 10.11.13 that was followed up with confirmation of the debut date  and wrapped things up to date with the second Trailer and a Behind the Scenes clip.

Though there are more clips to explore, some of them reusing the same footage here are few clips not appearing on our site. Take a look.

In Conclusion: We think you get the idea by now. It is going to be, to quote the show, “deep and dark, detective, deep…and dark.” We at HBOWatch are excited to see this dramatic addition to the HBO schedule. Even though it is only eight episodes long it looks like quite a bit of gritty and impactful storyline will be contained therein. Clearly the promotional material makes it clear that the disturbing side 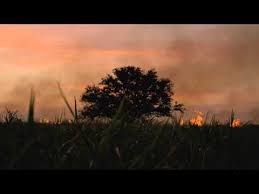 of gruesome crime and the troubled psyches dealing with it on both sides of the law are forefront. The darkness of the case Cohle and Hart experienced back in 1995 resurfaces and so does the darkness within them. All is to be exposed beginning 01.12.14.

And it all centers on that tree.

We will be there every step of the way to see it unfold. We hope HBO fans will follow the show through the bitter cold months of winter and join us here at HBOWatch to revel in the deep & darkly sinister, mysterious and deadly world of the TRUE DETECTIVE.