The Australian novel of the same name, published by Liane Moriarty in 2014, is soon to make its debut on the small screen.  Big Little Lies has received plenty praise for its balance between the comical and the serious. It begins as single mother Jane (Shailene Woodley) relocates her son to a new area, attempting to get away and wanting a fresh start.  On the day of kindergarten orientation not only does Jane make new friends in Madeline (Reese Witherspoon) and Celeste (Nicole Kidman), but Jane’s son Ziggy is accused of bullying another classmate.  When he denies it, a schism forms between the parents.  Pro-Ziggy and not pro-Ziggy.  As the year continues, divisions become deeper and more hateful.  The lives of the women are dissected and it culminates to a head at the school pub trivia night fundraiser, where someone loses their life.  Sorry to get spoiler-y with that tidbit.  Hopefully,  by now you’ve read the awesome novel or found out from somewhere else.  But hey, at least I didn’t tell you who was going to die.  Now that would be really spoilerific.

The brilliance of the novel is that while the story moves along, comments from people being interviewed after the incident are along with you to provide context and insig 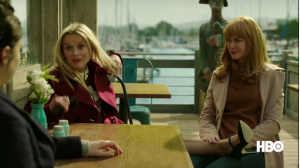 ht into the story.  But one difference from the book can already be noted.  The Australian author placed the novel in Australia, and while I assumed HBO would change locations (which it did) I was still a little bummed not to see the amazing landscapes and dramatic views of Down Under.  With adaptations such as this, character manipulation and altered information are easy to do.  Many times minor characters will be omitted and details changed to suit that.  Time will tell when the series premieres and how much change from the book will take place.  Most good novels, in my opinion, have the many character arcs and threads that are artfully woven together into the complete story.  But adaptations for the screen, small or big, can’t take the same amount of time and care to tell the story as the amount of time reading a book.  I have faith in HBO’s ability to do justice to the story and leave out arcs or characters in a way that won’t detract.

The cast for this mini-series is absolutely amazing, and incredibly well rounded.  Shailene Woodley, Reese Witherspoon, and Nicole Kidman star as arguably the three main characters.  There are so many different stories to tell in this one piece, but it does seem to come back to these three.  The women ground the story and will provide amazing performances, I have no doubt.  Adam Scott and Alexander Skarsgard play Madeline and Celeste’s husbands respectively.  Laura Dern is the leader of the not pro-Ziggy camp, and it will be interesting to see her go toe-to-toe with Witherspoon.  Other actors include Zoe Kravitz, James Tupper, David Monahan, Sarah Burns, and Virginia Kull.

Have you read the novel?  Are you looking forward to the adaptation?  Who do you think will meet their maker?  It is set to air on Sunday, February 19th, 2017.  Watch it with us?