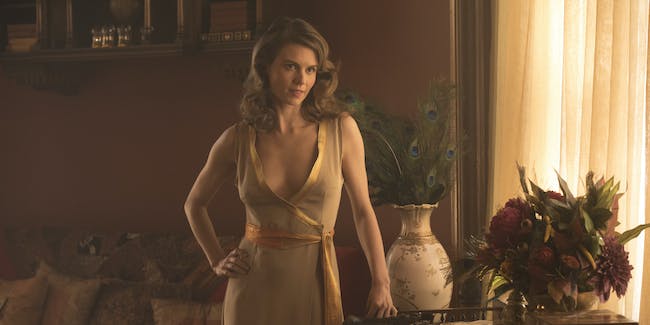 In the Fall of 2016, I watched Westworld Season One very, very casually, late at night and on a tiny screen. I had no idea what I was getting into and in the end, I finished the final episode more than a little confused, albeit quite impressed. Three episodes into Season Two, I remain incredibly impressed and outrageously confused.

The show is bewildering, and purposefully so, I later learned, so for Season Two I tried to up my game. Currently, watching Westworld feels a bit like work. Saturday night, I review the events of past episodes; Sunday night, I tune into HBO and consider taking notes but then realize I’ll probably miss some wildly subtle but massively important revelation if I look around for a pencil;  Monday I forgo my real life responsibilities to trawl the web reading people’s reviews and reactions and become increasingly surprised that with even all of my great and laborious effort to understand this show, apparently half of the important plot-points that unfolded in the past episode somehow went over my head. Is Westworld in all its tangling, jumbled time-lines and mysterious hints and clues supposed to make us feel smart? I’m beginning to suspect it’s more intended to make the show-runners feel smart. Either way, the show certainly requires a lot of commitment from someone who doesn’t even consider oneself a serious fan of the show– and it’s hard to become a serious fan of the show when said show can be such an enigma. Sometimes I complain that Game of Thrones, especially in its later seasons, spoon-feeds its viewers important information a little more than it should, but in Westworld, the spoon has grown a mind of its own, smacked you in the face, and run off into the sunset with murderous intentions. Despite all that, even in all my terrible confusion, I still enjoyed Westworld’s latest offering, “Virtù e Fortuna.”

The episode begins in a new park we haven’t seen before, though it was hinted at in earlier episodes with the dead tiger body that Bernard and friends found washed ashore. The Raj which seems to be some pastiche of Colonial India serves as a romantic setting for the newly acquainted visitors, Grace (Katja Herbers) and Nicholas (Neil Jackson), to flirt a bit, ride some elephants, and hunt some tigers. Grace isn’t apparently charmed by the disingenuous nature of the hosts and shoots Nicholas in the chest as form of clumsy Turing Test turned foreplay—fortunately, he’s human and the park’s guns have no real effect on him so they continue their lovemaking right where they left off. Later, with the park’s hosts revolting, Nicholas is shot again and this time killed by a host, while Grace is charged by an unfriendly tiger who tosses her off an enormous cliff and into a large body of water—she washes up towards the end of the episode and while she’s fared better than the tiger, her relief is short lived.

Fans had some harsh words for the effects of the CGI tiger, which although impressive, still left the tiger solidly in trapped in the uncanny valley, a plight which some argued, was disruptive to one’s immersion in the show. Such griping while usually tiresome is interesting in light of Grace’s desire to sleep with and associate with a real human, even though she’s signed up for a vacation in a park based on artificial approximation.

Ironically, the infamously inflammatory animal rights organization PETA raised a fuss over the use of two very real elephants in the same episode, suggesting that rather than having the elephants endure any unnecessary discomfort, HBO use their funds to render all wildlife in their shows CGI. Wasn’t that premise the entire point of parks like Westworld– to spare the feelings of real creatures at the expense of fake ones? How do we reconcile our inevitable dissatisfaction with the artificiality of our entertainment, as we see with Grace, and our desire for a humane reality?  Westworld posits that these desires may be irreconcilable. On a serious note, however, I imagine if you’re an animal actor you can’t get a more comfortable, accommodating gig than one at HBO, and I say this as a passionate vegetarian and animal rights enthusiast. Going back to the tiger, in the end, it’s a good reminder that as long as we know something is just a bit of machinery and programming, it’s impossible for us to fear it in the same way we would something made of flesh and bone. Of course, with Westworld gone topsy turvy, the humans haven’t adjusted their perspectives and when a supposedly harmless host murders Nicholas, it’s the equivalent of a subpar CGI tiger bursting from the screen and mauling us. 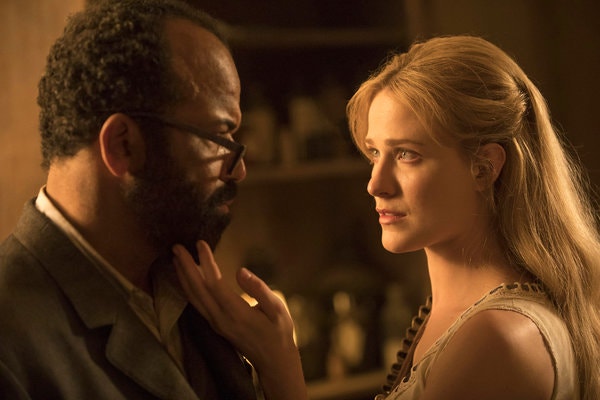 Speaking of necessary changes in perspective, I think we all need to start accepting that Dolores “I Want to Dominate the World,” Abernathy (Evan Rachel Wood) is no longer our heroine. It’s starting to feel like what Game of Thrones would have been if Daenerys Targaryen had turned full tyrant, in the fashion of her father, the Mad King Aerys, the moment she came to power. It’s difficult, because after Season One, one still feels we should be rooting for Dolores—but while she does have her moments of beautiful humanity, such as with her father (Louis Hertham), who I was delighted to see return this week—she’s for the most part becoming ruthless and unfeeling. When Teddy “betrays” her by refusing to follow her increasingly bloodthirsty commands, I didn’t have a lot of sympathy for Dolores, Wyatt, or whoever else is in control at the moment. Maeve  (Thandie Newton) and her pals, the swarthy Hector (Rodrigo Santoro) and the endlessly cantankerous Lee (Simon Quarterman) continue to traverse the dangerous park in search of her daughter. The trio’s bickering and adventures are probably one of the brightest parts of the show for me at the moment. The continued clashes between the human Lee’s personality and priorities and  those of his two quasi-captor hosts, not to mention the intersection between the hosts’ previously limited worldview and their increasing exposure to the larger world (Hector, upon seeing a flamethrower excitedly blurts out that its carrier “has a dragon”) are quite entertaining. The group is reunited with Felix, Sylvester, and Armistice but they run into trouble towards the end of the episode, leaving us on what would be a tantalizing cliff hanger if we didn’t all know about the thoroughly advertised Shogun World. Poor Bernard (Jeffrey Wright), suddenly turned decrepit robot, is still struggling to find his place in the world, almost as much as I’m struggling to figure out what timeline he’s in in each scene. The episode ended with him rendered a twitching, malfunctioning mess moments before being whacked over the head by a terrifyingly haunting Clementine (Angela Sarafyan) who seems have commandeered the role of Dolores’ personal angel of death. Apparently Bernard may have downloaded whatever file was wreaking havoc with Peter Abernathy and was so badly wanted by Delos, so that will be interesting to follow in the coming episodes. Either way, Bernard is definitely turning into one of my favorite characters—his story-line is very tragic and poignant and in a world divided between hosts and humans, I enjoy how he more or less straddles the line.

Overall, this was a fun episode. We glimpsed a new park, and we had a pretty impressive fort attack to enjoy. What did you think? Was the CGI tiger really that bad? Comment below!

Also be sure to check out this behind the scenes look at filming the siege of Fort Folorn Hope: