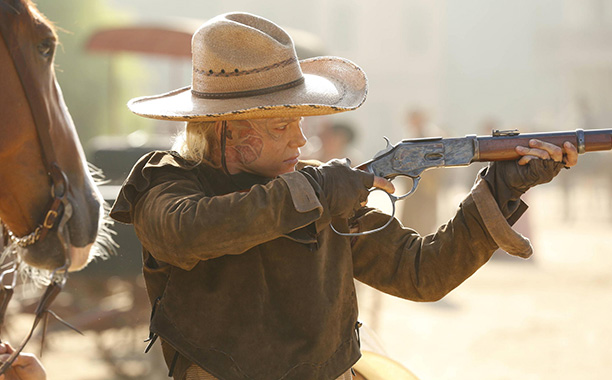 UPDATE: Westworld has been delayed to 2016!

Ever since HBO gave us that Westworld tease last year we’ve been keeping a close eye on the production schedule. The pilot was shot in 2014 but the series itself has still yet to be filmed.  In an interview last week with Simon Quarterman, an actor who plays a character named Lee Sizemore on HBO’s Westworld, Simon says that they won’t begin filming until July:

Just now, things are really beginning to take off. I start shooting Westworld for HBO in July. We shot the pilot last year and we got picked up so I’m very excited about that. I think everyone’s in for a real treat with that. I haven’t seen any of the scripts just yet, but judging by what Jonah and Lisa wrote for the pilot episode, it’s going to be an incredibly exciting series.

This leads us to believe that the show will not be ready do launch in time for an early fall premiere date. You may have been expecting Westworld to hit HBO’s air in Boardwalk Empire’s old time slot. After all, HBO needs something for the fall sweeps, right? We doubt that Westworld will premiere in September or even October given this shooting schedule.  Though the original Westworld was shot in 30 days, apparently.

This all might sound a bit crazy but perhaps HBO is hoping to debut the show in a time slot with less competition. Early fall is traditionally the big push for all networks to get their premium content onto air. HBO may want Westworld to stand alone so that it doesn’t get lost.

Or, this could just be a scheduling nightmare, ala what happened with True Detective season two.  When you’re juggling the schedules of movie stars like Ed Harris and Anthony Hopkins things can probably get a bit tricky.

We still take HBO at their word that Westworld will premiere in 2015 sometime.  HBO’s announced schedule is looking pretty thin for Fall 2015 without this show. Whether Westworld comes sooner rather than later we can’t say.  But at this point we’re expecting a November release date given this latest information.