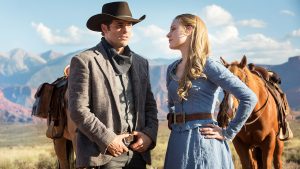 Directed and written by: Jonathan Nolan

First off, who ever dubbed this show the new “Game of Thrones” has never actually seen it. I went in with extremely high expectations after hearing that comparrison, excited to possibly have a new favorite show to gush over every week. It didn’t exactly live up to my standard for an HBO show but it was only the first episode so I will save my compelete disregard for it until I’ve seen a few more episodes.

The intro began in typical HBO fashion, similar to that of “True Blood, with the opening sequence involving a montage of creepy images. I was hoping the tone would have more True Blood nods but unfortunately, that only extended to Evan Rachel Wood being cast as the main female character and the minute long intro.

“Have you ever questioned the nature of your reality?”

The background (for those of you who didn’t get around to watching it) is described as “a vast, remote theme park where guests pay top dollar to share Wild West adventures with android hosts.” Emphasis on the android part because otherwise the show wouldn’t have made it past the pilot.

One of the things I did find interesting was how the show depicts two different story lines. Not only do we get a glimpse inside the park at what is going on during these sessions but we get to watch the developers struggle to keep things running smoothly from reality. It’s cool to see the different dynamics between this world that was created out of imagination and the world that exists based on science and logic.

The show starts off slow and almost confusing. It’s almost as if we are being dropped into the story halfway through which was an intentional decision for the writers. They wanted us to get the feeling we are missing something big. The two main characters of the episode, Dolores (Evan Rachel Wood) and Teddy (James Marsden), seem to be the focus for most of the episode. Wood and Marsden play well off each other, though the budding relationship seems naive and almost child-like. Almost immediately, it was easy to figure out that this “love story” was part of the fantasy. Dolores is the fantasy.

Dolores seemed like one of those characters that I was going to wish they would kill off for dramatic effect. The show begins with her being very one-dimensional, 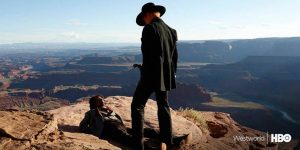 which is definitely intentional since she’s not even real. As the episode progressed, she developed a bit more spirit than I initially thought. In a not so subtle rape scene, we see her fighting the “Man in Black” as he drags her away from Teddy to have his way with her. This is one of my least favorite things about television these days. Rape seems to be a common plot device that is pulled out for dramatic effect and the reaction it is sure to invoke. While the rape itself isn’t shown, it’s alluded to enough that we know exactly what took place behind closed doors.

The “Man in Black” is one of the few things I wanted to know more about. The obvious villian (he kidnaps Dolores, taunts Teddy with his powerlessness before shooting him, and rapes Dolores), he has a bit more substance than the other characters. He seems completely locked and loaded on “reaching the deeper levels of the game” and even murders a guest, thinking this is the way he will get there.

The entire theme park appears to be run out of a virtual reality center. Customer’s bodies remain at the facility and out of harms way as their minds are transported to their fantasy. So far, no matter what happens to them within the parks, the physical bodies are not damaged. They can die hundreds of times without any real consequences.

Each player appears to be assigned an android host whose memories are wiped after the game is concluded. They are not supposed to have any recollection of the time they spend with the guest though the guests themselves remember each detail. 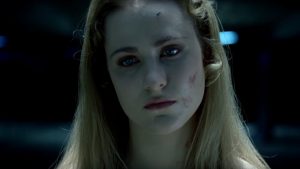 The theme of a “fly on the wall” is apparent through the whole episode. The fly appears each time a droid gets a glimpse into reality behind the endless loop they live in.  While it doesn’t seem as though any of the droids are self aware enough to put together that they aren’t real, it’s obvious this is going to start breaking down.

This plot device is so overdone that I can’t help but roll my eyes that there is another show that is using it. They walk the tight rope of wanting very human-like androids but oh-no-now-they’re-too-human. It’s the next logical step in the plot that the androids would begin breaking down once their software upgraded.

“Hell is empty and all the Devil’s are here.”

Thandie Newton, whose character name is Mauve Millay, was one of the best parts of the epiosde for me. She plays the game just like her character is supposed to but then does the unexpected by pulling a gun and shooting off a man’s face for harrassing one of her girls. It was the first time we saw a droid react in a very human way.

The game only works as long as the androids live in the dark about who they are and why they are there. Peter, Dolores’ dad, begins to deteroriate throughout the episode and in it’s final moment we see the techs attempt to reset Peter. Instead, they reawaken a fragmented version of his previous characters. He immediately threatens revenge on those who created him, telling them, “You are in a prison made of your own sin.” In the end, we see a graveyard of defective drones all lined up in a row. I call that before the end of the season we’re going to have an android riot.

The episode definitely wasn’t my favorite ever but I’m hoping that was more to do with laying out the framework of the pilot than the actual show. Check back in next week to see what we think then! You can watch the preview for Episode 2 below!

What did you think of the premiere? Is it the next Game of Thrones? Or another flop? Let us know in the comments!