Season 1: The Maze.  Season 2: The Door.  Season 3:  The New World. HBO’s most ambitious series returns in a more linear, and more dazzling format. The series premiere on this past Ides of March evoked a myriad of atmospheric film and literature inspirations. The omnipresent surveillance channeled George Orwell’s novel 1984 and Steven Spielberg’s 2002 film Minority Report. Co-creator Jonathan Nolan directed this episode, and shades of older brother Christopher Nolan’s The Dark Knight and Inception can be seen in the infiltration of heavily encrypted security systems and sweeping shots of fortified buildings. This level of execution justifies the 19+ month delay in between seasons. Get ready for our look at Season Three but first this:

S3E01 derives its name Parce Domaine, from a Roman Catholic chant that translates to:

Be not angry with us forever.

Uncharacteristically, Westworld Park’s oldest and deadliest host Dolores Abernathy is controlling her anger and sparing individuals (to some degree) thus far in Season 3. This is surprising, as in last season she led an all-out genocide against all Homo Sapiens. Parce Domaine opens with a digital circle of quantum bits, which we later find out is a graphical representation of algorithms being processed by a supercomputer/mainframe known as ‘Rehoboam’. The circle spikes due to an anomaly in the city of Beihai, a quaint but heavily 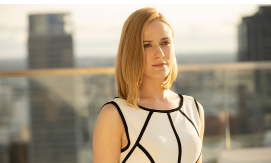 industrialized prefecture off of China’s west coast. The anomaly is the infiltration of a high-tech mansion, owned by an appalling and wealthy man that once visited Westworld for his bachelor’s party. A then ‘unaware’ Dolores was subjected to rape and other exploitation by this man. In an elaborate sequence of stalking and razor-sharp dialogue, Dolores coerces the man into using his fingerprints to transfer money to fund her yet-to-be detailed masterplan. The man’s doom was not at the hand of Dolores, but on his own, for Dolores expresses that she doesn’t want to hurt any more people. A swing and a miss at Dolores with a nine-iron from an expensive golf club set his causes death by head trauma after hitting the side of a pool.

The true identity of the Host doppelganger of Charlotte Hale remains a delightful mystery, for Dolores made a copy of Hale during the finale’ of season 2.  When the imposter attends a board meeting at the Delos San Francisco location, we learn that Bernard Lowe has been bestowed all of the blame for the 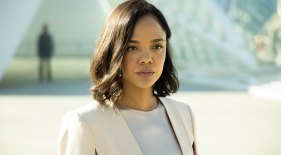 massacre that happened in the park.  Who the “Hale’ is Hale?  Other Westworld sleuths and I believe that Hale is actually Dolores’ old flame Teddy Flood. But it could be any Host or even human persona inside of the Hale imposter, for the Delos Corporation made copies of the DNA and personality traits of all who visited the parks.

Breaking Bad alum Aaron Paul co-stars as a struggling veteran named Caleb. Caleb is far from living in poverty, but his construction gig is not enough to care for himself and his ailing mother in a 2058 Los Angeles. Paul’s presence is felt all throughout the Season 3 premiere due to his sublime thespian skills.  However, his character is rather cliché’. He is a veteran suffering from PTSD, has an underpaying job, and must care for his bedridden mother. However, the encounter that he has with Dolores at the end of the episode was 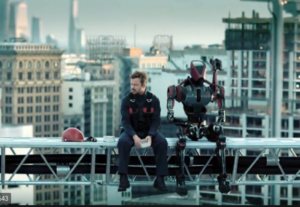 nearly identical to Dolores’ introduction to William/The Man in Black in the first season. Careful optimism at this point regarding Caleb, albeit his plight does have an interesting story arc that involves him taking part in illegal activities over an application that is connected to the dark web. Caleb will perform larceny, vandalism and other prosecutable activities over the App RICO, as long as it does not involve physically harming people.

Season 3 of Westworld is primarily set in Los Angeles, however very little was filmed in the United States’ second largest metropolitan area. Singapore was the surrogate for Los Angeles, like Valencia, Spain substituted for San Francisco. The result is effective, as only subtle CGI was added to depict a not so distant and tangible future.  Action sequences in Singapore are intense and simultaneously poetic.  In the episode’s climactic scene, Dolores sustains heavy injuries (thus why she falls into Caleb’s arms), and the majority of this action is caught in a brilliant shot from within the interior of a late 2050s SUV. One of my favorite scenes was one of the quietest, with Caleb and his construction robot pal sitting on an iron girder, which is reminiscent of the iconic 1932 “Lunch atop a skyscraper” photograph.

The Rehoboam AI system is the lovechild of Google, Amazon, Microsoft, Apple, and the US Department of Defense information systems. As Westworld channels biblical references with the name of this episode, the name Rehoboam is derived from the name of the first king of the Kingdom of Judah. The Kingdom of Judah saw constant clashes of empires.  HBO subscribers are certain to see clashes between those of biological and machine anatomies.

What did you think of the Westworld Season 3 premiere? It’s a pretty dramatic departure from previous seasons, but this ‘New World’ is what fans have been yearning for since the start of the series. Bernard and Maeve had little screen time this outing but brought serious intrigue with Bernard heading to Westworld to seek out Maeve.  The latter is revealed not to be at Westworld, but another park set in Fascist World War II Italy  “Bring yourself back online” next week with the S3E02 on HBO. Remember, WESTWORLD Sunday nights at 9:00pm.