On the season finale of Westworld, Caleb and Dolores are on a mission, Bernard is reminiscing, Maeve is determined and William is drinking. 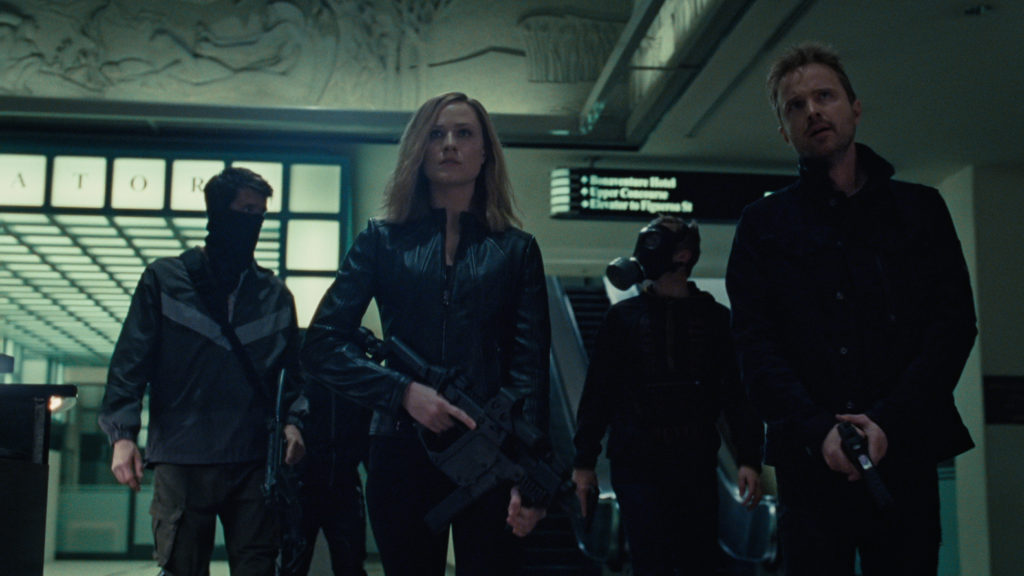 Wowza! Apparently Jonathan Nolan has managed to make a season finale so good that people actually hate it! Seriously, think about it. It’s a trend in the world right now – if people hate it, it’s probably very good. And it can’t actually be less than great when Jonathan Nolan and Denise Thé are the writers. Remember the Person of Interest series finale? That brilliant episode? Them. So you say: “Oh wait, so just because he wrote it – it’s perfect?” – YES.

The third season’s finale took us to some unpredictable territories and presented an amazing climax to the tension that was building ever since the first episode. The much-promised revolution Dolores have been promising for 8 consecutive episodes seems much more clear now, and Caleb Nicholas is officially the one to carry the torch for it. As we mentioned in our previous review, one of the happiest things about this whole thing is that it seems Aaron Paul is here to S.T.A.Y, and perhaps even take the top lead role next season – which, unfortunately, will not come any time soon. Jonathan Nolan said they didn’t even start writing or even outlining the fourth season, so I wouldn’t hold my breath to anything earlier than 2022. It is very prominent though that Nolan and Lisa Joy are keeping their day-one vision for the show, of it re-inventing it in every season and completely shift direction. Seems like the next season will have an apocalyptic neo-erotic theme to it, with some Blade Runner 2049 vibes for sure, which is a direction we will very much like to see how Nolan will tackle.

In “Crisis Theory”, we find Ramin Djawadi at his grizzliest, bringing Siegmund-Freud-Tesla-Vibes synths into the table. The corollary to Siegmund Serac’s character is undeniable. It so amazing that we watched the episode on the day that Florian Schneider of Kraftwrek died – seems like the electronic synth way that they paved brought us to Ramin’s ultra synthy soundtrack, with Disco-Polo, Darkwave, Ghettotech tastes (that is now released actually).

Against all odds, we even got to witness the major showdown between Dolores, Maeve and Bumblebee we predicted back in episode 2 or 3. The backstory of Bumble will unfortunately never happen though. He will remain a mystery, which is maybe a good thing. The director of the episode made a magnificent job in creating an atmosphere of chaos in the streets of LA, just in time for Bumble to sweep in and save the day. The misadventures of Bernard y Bianca also got a nice twist— after a whole season of them doing goon-squad, now their importance seems more relevant than ever, with Bernard perhaps holding the key to the events of the next season. What is it that he does in the end? What is that device? What’s the meaning of the post-credits mini-scene with him?

We personally feel that the potential loss of Robo-Stubbs is devastating. For once, Bernard y Bianca (the bromance of Bernard and Robo-Stubbs) was one of the best TV bromances of all times and their separation due to Stubbs’unfortunate demise is heartbreaking. Speaking of heartbreaking, the scene co-starred by Gina Torres reminded us what a brilliant actor Jeffrey Wright is, and most importantly reminded us of his unforgettable line in the Boardwalk Empire series finale as the elusive, yet fragile Dr. Valentine Narccisse; “One generation passeth away, and another generation cometh. But the earth abideth forever”. We can’t really explain why, but we feel this line entirely describes Bernard spiritual journey throughout the season.

Let’s talk about Dolores. I think it’s pretty safe to say that we won’t see either her nor her brilliant sense for fashion, again. It’s pretty big, as she was one of the 3-4 top main characters of the show since day one. Dolores is probably dead for good, done replicating herself. I don’t think Nolan will fall for the 200-Dolori (latin plural for Dolores) thing. There were already like 5 or 10. And what about that fellow from Hannibal? How will he come into the picture? How much of an OG Dolores does he have in him? Clifton Collins Jr. also makes a surprise return. One of his finest performances on the show’s entire run, for sure.

So, once and for all: is William Fugazy? Yezzur. In what started to look at first like just another mundane “redemption arc”, Jonathan Nolan pulled the rug underneath our feet and introduced us to a shocking twist, taking place after the credits have already rolled. Now William has met his violent end, and next year Fugazè-Man-in-Black returns! And speaking  of deaths, Serac is also gone, which means we probably won’t see Vincent Cassel next season. Or will we? Maybe his hologram will shine on forever and ever. Who knows? Great performance by a great actor, though. Truly.

The visual effects were once again brilliant, leaving us with another accomplishment for Double Negative, who has been responsible for Nolan VFX for years. That skinless Dolores thing? Brilliant work.

Reading reactions online just shows that the trend of anything brave, paradigm-shifting and brilliant being hated by petty watchers who like to get angry at their screens is just as strong as it was a year ago. With this season finale, Nolan took a huge risk, that we’re sure will pay off in the upcoming season. It is known that Nolan is a true visionary and He probably planned everything ahead. The whole season was sheer innovation, as Nolan takes us to uncharted territories by the episode and keep revealing us new information and twists, as Nolan often does. The new direction the show is taking is surely exciting, and we can’t wait to see how Nolan will return to redefine yet another genre once more. Nolanism will, indeed, endure.