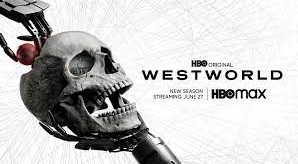 Season Four of WESTWORLD debuts with an episode filled with all the traits viewers have been accustomed to since premiering in 2016:

Regarding the latter, die-hard fans of the series will remain for the long haul. Those who lost interest in previous seasons and new viewers alike may not be drawn in by Westworld S4E1: “The Auguries”.  This is because the show requires uninterrupted attention, multiple re-viewings of certain episodes and recaps of previous seasons.

The Man in Black

The familiar strumming of violin strings creates an ominous tone that signals the arrival of the Man in Black. William arrives at the Hoover Dam in a sleek vertical takeoff/landing vehicle. We learn quickly that the U.S government has allowed cartels to operate legally in some capacities, and William seeks to 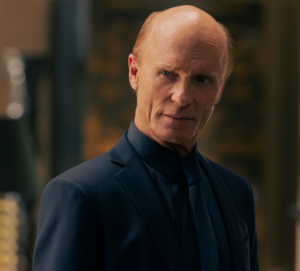 purchase the Hoover Dam from the organized crime owners. The Hoover Dam powers the servers housed inside; servers that house invaluable data that was lost in “The Forge” from Season 2.  When a captain from the cartel refuses to sell the dam, William states [paraphrased] “either the dam will be sold today, or taken tomorrow”.  Not realizing that the entity in front of him is a Host copy (the real William was killed last season by a Host copy) of a relentless psychopath, the Cartel member laughs off his threat.

Returning to report to the Cartel boss the following day, the befuddled man violently kills off his boss and fellow soldiers. William used robotic flies to control its victim. If this doesn’t make sense, remember the symbolism of flies throughout the run of Westworld. Flies caused all Hosts to malfunction because they were not programmed to swat away the pests. All Hosts, except for Dolores, who swatted away a fly in an early season 1 episode, suggesting that her nature is far more advanced than most other Hosts. The Charlotte Hale version of Dolores is in full command of the Man in Black. 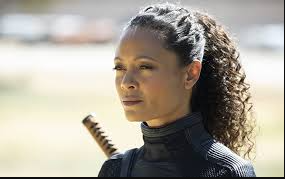 Maeve is the most powerful Host to have departed the Westworld Park. She possesses abilities to tap into the memories of other Hosts and induce power surges that could knock out entire metropolitan power grids. Maeve’s most recent blackout draws the attention of William’s fellow Host goons, many of which are physical copies of dispatched villains from seasons 2 & 3. Maeve once again makes mincemeat of the Hosts, and taps into one of the Host’s CPU to learn that William sent a team to eliminate her. Maeve then seeks out Caleb Nichols, to warn her friend the war is not over.

Caleb is married with an adolescent daughter. Although it is implied that Season 3’s war has been over for 7-8 years, Caleb’s paranoia is causing strain with his better half and being mimicked by his daughter. One near-fateful night Caleb kills an intruder, and Maeve appears to take out more of the remaining Hosts. Caleb’s wife is vexed, yet realizes Caleb’s paranoia was warranted. After creating a contingency plan for his wife and child, Caleb departs with Maeve to hunt down William. 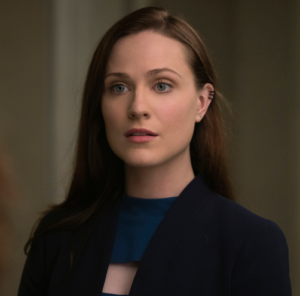 Delos’s oldest Host appears in her most recognizable form, but it isn’t the Host at all. Evan Rachel Wood, this season is playing a Human woman named Christina and is working as a writer for an entertainment company. The company’s name is written in the same font and style as Delos, hinting at what we just don’t know. Christina and her roommate Maya (Oscar winner Ariana DeBose) depart for a night out in Manhattan, and Christina’s uneventful blind date is interrupted by a call from a stalker. The stalker later reveals himself as a disturbed man named Peter.  Peter is a character from one of her’s stories, and he accuses her of controlling his life. This is proven when Peter commits suicide, a story arc that was written by Christina in her current writing project.  Watching her from afar is Teddy (James Marsden). Remember him as Dolores’ lover from Seasons 1 & 2.  With all of the opposition from Charlores (the Host containing intermingled Charlotte Hale/Dolores programming) and William, this version of Teddy is undoubtedly a threat, right?

Charlores, escaped with five host pearls in Season 2. Delores created multiple versions of herself and informed Maeve and Bernard (who was absent from the Season 4 premiere), that their lives were spared so that Delores would have resistance to her plans. In short, Bernard, Maeve, and Caleb exist to keep the playing field even; for Charlores would easily take out humankind without this trio.

Showrunners/spouses Lisa Joy and Jonathan Nolan and executive producer JJ Abrams envisioned their science-fiction epic for at least five seasons. Season 4 consists of eight episodes, and this writer can’t theorize where it will lead viewers.  “Well Enough Alone” is the second episode of the fourth season and will air on July 3, 2022 at 9PM ET on HBO.