Maeve is back. Same with Hector and Lee (I was hoping to see the gang back together again). As an aside, I am absolutely loving some of the wardrobe choices for the ladies. Maeve is her 1940s glamorous dress and Hale, in her professional attire. Amazing!

Serac has gifted Maeve with some backup and Maeve knows how important aid is, especially seeing how brutal and determined Dolores has become. Serac’s goal is to see Maeve hunt down Dolores because they want to stop her. Again, you must wonder about Serac – is he what he seems? He is the villain or is there more than one bad guy? As for Maeve, I want to believe that she is the good guy but put in a difficult position in having o confront Dolores and ultimately, kill her to stop further death and mayhem. Maeve can certainly hold her own. Seeing Maeve lift her arms right before she kicks the stuffing out of the Nazi regime reminded me of the Night King at the end of the battle of Hardhome – lifting those arms as if to taunt your opponent. You desperately want to see Maeve triumph and her meeting with Lee and reunion with Hector gave me a tiny sprig of hope. 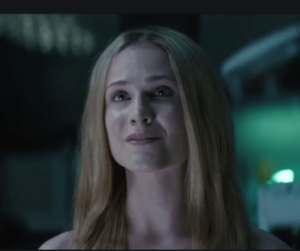 Guess who’s back? Dolores. She is not alone: Charlotte Hale (Dolores II) is helping to speed up the process of retrieving IP data for Dolores, for the purposes of ‘building their new world’ and to screw over Serac. You need to start drawing a bubble map or flow chart to keep up with the characters, their motives, who is good, who’s bad and who is a host. This episode really turned me on my head because Dolores had made multiple Hosts of herself, just cleverly disguised as other characters (Shogun’s Musashi being one of them, and Hale being another). Maeve’s body is being repaired in the lab, but she is still inside a simulation. Maeve and Dolores end up having a conversation and it becomes clear that these women are going to be pitted against each other. Dolores feels she is justified in killing any human being who gets in her way, for the purposes of saving the hosts and building a better world to live in. She has become a stone-cold killer, remorseless and matter of fact in terms of getting the job done.

Maeve can control other Hosts with her mind and that itself is a huge advantage over the rest of the Hosts in Westworld. This meeting was inevitable, and Dolores had already anticipated what the fallout could be. She made alternate arrangements, should she be framed, detained or an assassination attempt on her life be made. Maeve did not fully prepare the way Dolores did and the fallout is heartbreaking. Hector is lost forever; Maeve is crushed at this blow. Her body is fully reconstructed, and we see a naked Maeve, waiting for the rest of the bodies to be fully restored, ready for some action. The look on her face, is it of anticipation? Determination? Who will these “other” friends be? What will she and company end up doing to Dolores?

William is back, too – and what a freaky ride it is. He is inside the institution, forced to participate in group therapy sessions, where his answers are a little too blunt for some of the others. His days are spent being locked in his room, except when he is subjected to medical tests and blood work. Williams sees something horrible – his psychiatrist gets a phone call and receives data from Incite. It is enough to make her become paralyzed with fear and hysteria and she kills herself in her office as William walks by. You could say that the outside world has gone to hell in a handbasket. At one point, William is placed in a room by himself, with special glasses for his eyes. Talk about surreal: William is in a group therapy session with himself in various roles: The Man in Black, formally attired William, businessman William, teenage William, and his father-in-law, James. Institutionalized William (in a white jumpsuit) is completely weirded out. Imagine having to sit in a circle with various replicas of yourself, at different points in your life. That would freak anyone out. As his father-in-law intones, maybe William is trapped or surrounded by his sins. One way or another, the hallucination ends – and it ends with a bang – with William beating his replicas to death with a chair while James looks on with glee. One of the biggest surprises of the episode is who saved William: Bernard and Stubbs. It seems there is been an awful lot of chaos at the institution and Bernard and Stubbs used that to their advantage to retrieve William out of that hellhole. Here’s hoping that Bernard, Stubbs, and William will eventually team up with Maeve. 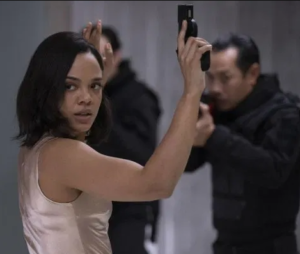 Dolores informs Charlotte of one last thing: get the IP data from Serac and then get the hell out of the building. Charlotte (Dolores II) becomes a killing machine. Let me state for the record that I never liked Hale, ever. Her first appearance in Season One left me grinding my teeth. She also had William thrown into the institution and placed some sort of tracking agent in his blood or body. How else was she able to determine his location while downloading all the IP information? Her icy demeanor almost works until she is caught downloading the data by one of Serac’s men. She quickly disposes of him and is about to leave the building until there is a last-minute board meeting. Hale is prepared for all contingencies (well, that is until the ending of the episode). Confronted by Serac and his security, she is revealed to be a Host and that is where the massacre starts. Serac taunts Charlotte, stating that Dolores left her at Delos to die. Hell, she even thought she had a decent chance to kill Serac at point-blank range, but that turned out to be a joke. Serac is no fool – it was his virtual self in that boardroom, as he was taking no chances.

Shots ring out, Hale goes on a massive killing spree and manages to make her way out of the Delos compound, wounded but on the run. Did I mention Charlotte had a little help? She was able to program a huge robot (as seen in a prior episode) and this robot smashes a few of Serac’s men into bloody puddles. Charlotte may have won the battle, but she did not win the war. Prior to killing everyone in the boardroom and hallways, she made last-minute plans to meet with her child and husband and get them to leave town.

Charlotte (Dolores II), you didn’t think it would be that easy, did you? Serac had a horrible surprise in store for you. While you thought you were going to escape and flee somewhere safe, with your family in tow, Serac also made contingency plans in anticipation of what you would do to him. An explosion cuts any plans that Charlotte had painfully short. Charlotte drags her burnt body out of the wreckage, and this is the tipping point needed to have Charlotte (Dolores II) align herself fully with Dolores in destroying every single human being on the planet. Charlotte’s hateful gaze at the end leaves with you with the impression of a woman who now has no distractions, and nothing left to lose. That is the most dangerous kind of person.

It leaves us wondering about what is next. Westworld Sunday’s at 9:00pm.