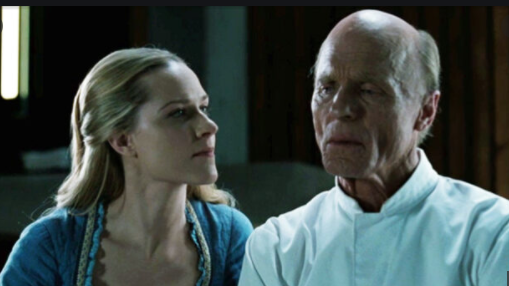 In 1883, poet Emma Lazarus penned the sonnet The New Colossus in an effort to raise money to construct a  pedestal that would anchor the Statue of Liberty, a symbol for exiles searching for better opportunities. Dolores Abernathy’s murderous rampage towards building a new world is meant to create a sanctuary for the exiled Hosts, and perhaps a few underprivileged humans.  Dolores sees herself as the mother of exiles but will it be at the cost of emancipation under this one self-appointed savior?  Episode 4 of Westworld executes one of the series’ biggest reveals to date, therefore there will be one major spoiler revealed in this article.  This must be discussed, for it will add coherence to this review and not paint the other site reviews into a corner attempting to write around this inevitable reveal. 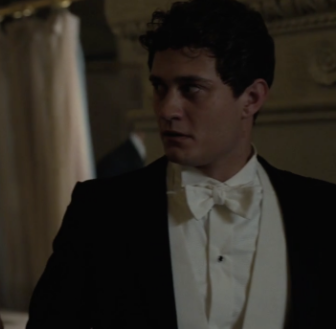 The Westworld showrunners employ recent technological advances to make this high-concept show accessible, as is quite evident in this episode. Clearly inspired by current SPACEX initiatives, rockets launching and rockets returning to Earth are seen in the far background as Bernard returns to a hotel where he and Stubbs are planning their first major offensive against Dolores. The Bernard/Stubbs dynamic is quite entertaining. Stubbs simply accepts that it is his destiny to carry out Robert Ford’s orders, and this includes assisting Ford’s protégé’/creation Bernard in all things. The duo don expensive threads to intercept a target of Dolores’ at a gala that reminisces of the sex party scene in Stanley Kubrick’s Eye’s Wide Shut.

Contrary to its scholarly title, The New Colossus is very action-oriented. The paths of the five most prevalent characters of the series collide, with Dolores being the victor in all instances.  How could Dolores be in numerous places at once? Spoiler alert:

Dolores copied herself into all five of the pearls that were carried off of the island, while disguised as Delos executive Charlotte Hale. Dolores’ downloaded consciousness is in Charlotte Hale, “fixer” Martin Connells, and Sato, the latter a Samurai from Shogun World. The result is Dolores having the only person that she trusts, strategically implanted where needed. This is first revealed to a mentally tormented William, aka “The Man in Back”.  William cannot escape lucid dreams of his daughter, who William mistook for a Host and killed in Season 2. William is now held up at a mental facility for his erratic behavior afflicting him since.. His supposed insanity causes Delos to divert his shares of the company to Charlotte Hale/Dolores Abernathy. 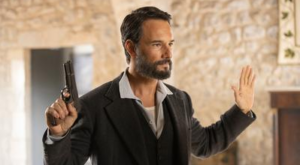 Caleb and Dolores procure the funds of Liam Dempsey Jr., to fund her master plan and this indirectly leads to embarrassment for Liam when he attempts to make a purchase at the gala. Although Dolores expected Bernard to interfere, she did not expect it so soon and with assistance. After an interesting exchange of dialogue with Stubbs, the two engage in brutal hand-to-hand combat with Dolores dispatching Stubbs over a balcony. Bernard loses Liam after “not Martin Connells” interferes. Even the clairvoyant Maeve is seriously injured by “Not Sato”, after uncovering Dolores’s methods of obtaining DNA to infiltrate the Incite corporation.  All of Dolores adversaries will live to fight another day, but at this moment Dolores is up 4-0 against major players William, Bernard, Stubbs, and Maeve. 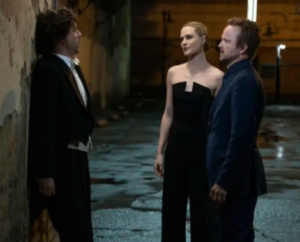 Although there was a big unveiling in this episode, the biggest mystery still lingers:  Who is Engerraund Serac?  Serac is the enigmatic creator and curator of Rehoboam, the massive supercomputer that predicts and dictates human interaction. Is Serac a human-like constructed manifestation of Rehoboam itself, or is he truly flesh and blood.  When Maeve is brought to Singapore to uncover Dolores’s dealings with Asian mobsters, (thus Maeve’s encounter with “not Sato” occurs), she states that Singapore is lovely, but Serac should have brought her to Paris to really impress. Through a flashback, Serac reveals that childhood home, Paris, was destroyed as a result of nuclear warfare. Conceivably, Serac may not be driven by greed.  Like his adversary Dolores, he may channel his trauma to create a world that he deems is best for his species. There is still plenty to unravel for sure.

In the Episode Five promo, Serac vows to eradicate anything that the system (Rehoboam) cannot predict. That anomaly would be Dolores and anything under her control. The beautiful theme in Season Three of Westworld is that humans and Hosts are questioning the nature of their reality. Just which one will prevail?

Bring yourself back online next Sunday at 9pm with the next round of HBO’s Westworld.