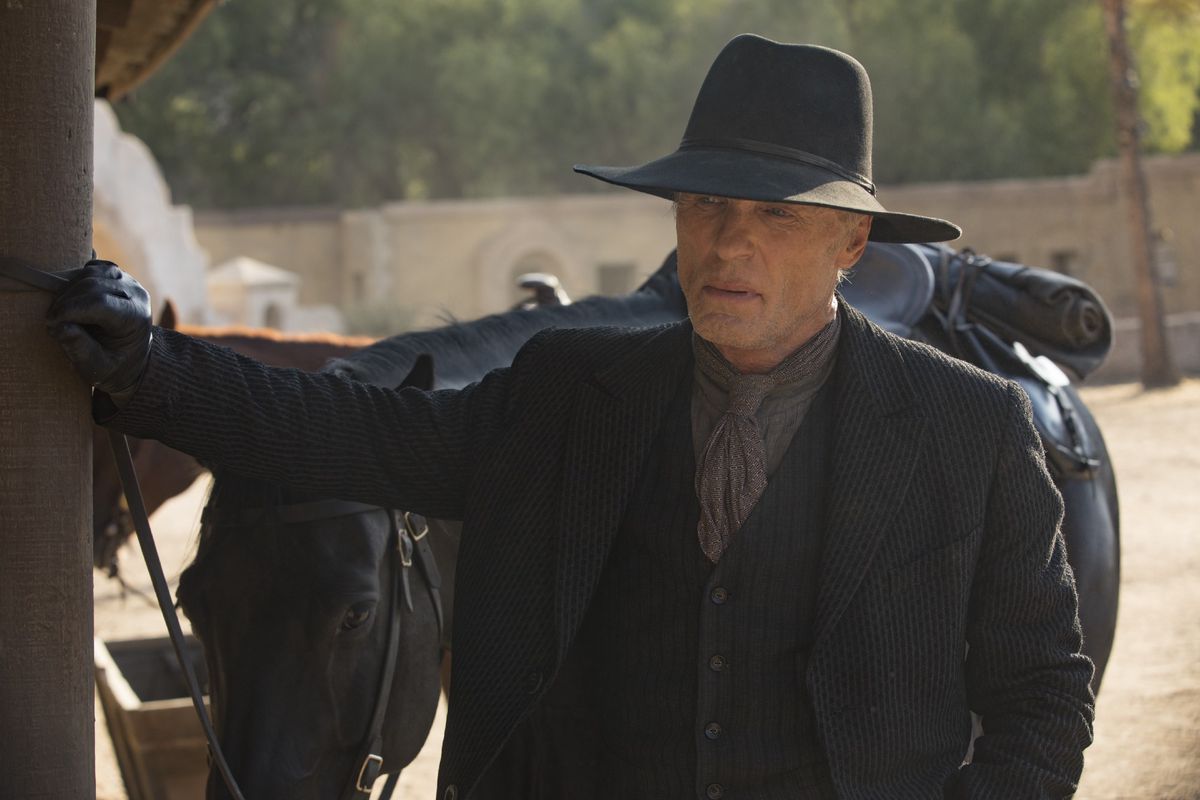 I said it at the beginning of the season and I still maintain it – I’m rooting for Bill and his horse. Sure William might be a sociopath that uses the park to exorcise the worst aspects of his personality – but he’s the only one that seems able to have a clear purpose without needing a regular monologue about his intentions.

That’s not to say that I don’t anticipate a deeper reveal for William’s character in Season 2. Everything about this new season seems to point to the fact that we don’t totally understand his journey. We met him in Season 1 and it seemed pretty clear. The Man in Black had no soul, no morals, and came to indulge in ultimate depravity and cruelty.

But he also makes it clear that his worst act – killing Maeve’s daughter – occurred after his wife died and in direct reaction to his daughter, Emily. So we are left to wonder – is that really who he is? Or did is emotional coldness stem from finding his wife’s body? The conversation between William and Emily, although expertly filmed by the fire, did little to illuminate this. William clearly remembers the women he loved (Dolores, his wife) in a flattering light. He took his family to the Raj park and his wife was scared of it, but William remembers it as his daughter’s fear instead.

This made me reflect on how every time that Logan discussed William and his sister it was to remark that he couldn’t believe they were together. I have to wonder if William’s wife wanted the shy, self-effacing William – the exact opposite of her father. And when William instead rose to even greater heights than the man and the dynasty she sought to escape, she feared that. And William took her pain upon himself – seeing himself as too broken to ever deserve the love of the women he worships (Dolores, his wife, Emily).

Of course I could be totally wrong and he’s just a psychopath completely driven by the park. Maybe it’s not that he’s trying to keep Emily safe from unknown factors like the Ghost Nation but that he’s trying to correct his “greatest mistake.” Maybe he’s wholly selfish. Maybe he’s always been a slightly lost, emotional guy who used the park to determine exactly who he is. Based on storytelling in the past it’s likely somewhere in between. So it could be that Emily begging him to leave the Park could be her trying to save her dad – or it could be her begging her emotionally abusive father to give her a sign that he values her more than the Park.

Truth, consciousness, our narrative – how much is in our control and how much is someone else’s narrative. This is what Westworld has probed at since the very beginning.

Which is why the surprise reveal of Anthony Hopkins (still not clear if he’s in the code, is a Host-Human hybrid, or some other plot twist that will be revealed later) brings up an interesting premise. Could Season 2 be the season where the humans (as compared to the Hosts) reveal their true nature? For Ford does this show that he doesn’t actually believe in the Hosts–that his release of the Hosts upon the Park is less an act of mercy for his control of them but rather a temper tantrum on a genocidal level? Is Ford seeking forgiveness for past actions or just showing the Delos Board that he has truly become psychotic when they threatened his termination?

Does the benevolent (if somewhat creepy Hannibal Lecter feeling) creator reveal himself to be the greatest evil while the fallen star of morning becomes just a lost man trying to find his way back to a moral compass? Or is Westworld, for once, going to simply give a straight forward villain and hero that guide the actions of the larger narrative arc?

Sure there are more stories that could be explored this episode. When did the train hit HQ? When is Dolores talking to Bernard (is it Bernard? Arnold? Bernold?)? What is with Maeve and the Ghost Nation? What happened to Elsie? All of these need answers and maybe they will unfold but the Man in Black’s story (and maybe Ford’s as well) slowly unfolding is the journey I am most curious to follow. Before it was a question of whether the Hosts were able to drive their own narrative. This season it appears more like we will have to face how much can we face our own narrative and how much we understand how people truly see the real us.

What did you think of “Phase Space?” Leave us a comment!

Also be sure to check out this behind the scenes look at “The Cradle:”