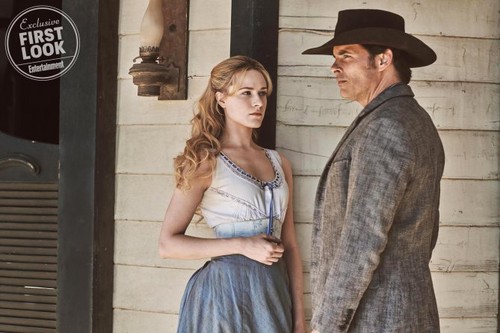 There’s a lot going on in the world of “Westworld,” right now. HBO has all sorts of things planned for the upcoming April 22nd premiere of their newest, sci-fi hit series– it’s hosting several advanced screenings across the United States in the next few days, where attendees can see the first episode before the rest of us do. Apparently, HBO promised that tickets for these events could be purchased via their official Westworld Facebook page, but it seems tickets have been elusive so far.

For those who can’t make it to an advanced screening, there has still been a lot of online hubbub generated by HBO in the last few days to promote the show. Most notably, perhaps, Westworld co-creators, Jonathan Nolan and Lisa Joy took to Reddit, specifically the infamous “Westworld” subreddit whose members managed to predict almost every plot twist from the last season, for an AMA, where they invited fans to “ask them anything.” Nolan and Joy had a lot of interesting responses to thoughtful fan questions, but the AMA devolved into wacky deception when the co-creators claimed that in order to combat overly accurate theorizing, leaks, and spoilers  in general regarding the upcoming season, they were simply releasing a video summary of Season Two in advance of the premiere. It was a very unconventional  and controversial move, and the press had a field day with the announcement even before the twenty-five minute video dropped. In the end, it was all a ruse– the video certainly spoils some things…those things mainly being a very cute dog, who does appear to have been a pampered and spoiled pooch (the video ends by informing us that Bento, the starring pup, is sadly no more. Tragic). Ah, HBO, will your trickery never cease?

In a more sedate interview with Entertainment Weekly, Nolan and Joy also elaborated on the upcoming inclusion of Shogun World in the show. They explained their desire to pick something different from the “worlds” shown in the original “Westworld,” film, but also their desire to reach a more “global,” audience. They also suggested that we shouldn’t expect too much accuracy from their portrayal of a feudal Japanese “world,” as, as with Westworld, this is more of a composite place for entertainment than an educational and historic recreation. Nolan also hinted, “Basically, we have a whole episode in Japanese.” That will be interesting!

HBO is also trying to attract their loyal and widespread Game of Thrones audience– the network made a handy listicle with some compelling reasons for why you will like Westworld as much as you like Thrones‘ Westeros, citing strong women, theories to indulge in, and of course, composer Ramin Djawadi. They have a point– Westworld is worth watching for it’s score alone.  On the more nitty-gritty side of things, we’ve learned more about new cast members joining Westworld Season Two. HBO has brought some talented folks on board for reoccurring roles in the newest season including Man in the High Castle and Batman v. Superman‘s Tao Okamoto, and Wind River‘s Julia Jones.

It’s just a matter of days now until Westworld Season Two premieres and we can’t wait. Make sure to keep checking in with us for the latest news about the show, and weekly recaps and analyses once the show begins.