As Westworld Season 2 opened with an attempt to pick up the dozens of story threads that it had woven in Season 1, it felt like people were being paired into couples as a way to consolidate narrative arcs and prepare for Season 2 – Teddy and Dolores, Bernard and Charlotte, Maeve and Hector, and Bill and his horse. Frankly I’m rooting for Bill and his horse over some of the other couples.

Let’s start at the top. Maeve and Hector, even though they were only together on-screen for a fraction of the episode, have easily become one of my favorite TV couples of the year. When they reunite it’s clear that Hector is still 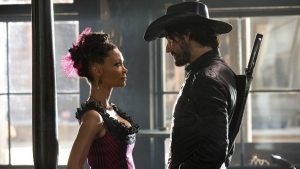 enamored with the cocky, passionate, and driven Maeve. But, especially for a recently “awakened” Host, he has a remarkable sense of self. Even though he doesn’t let Maeve apologize for leaving him to die at the end of Season 1 – silencing her with a steamy kiss and a brief “I would have expected nothing less,” he also knows that she didn’t come back for him. In less than a minute he’s absorbed the new plan. You have a kid, somewhere in the Park, and  we’re going to kill anyone in our way? All of it sounds good as long as he gets to be with Maeve.

This is in contrast to the relationship we see between Teddy and Dolores. Maeve retains the cocky and jaded attitude combined with a slinky walk that was her signature as a madam as she totes an assault

rifle rather than a lace fan, whereas Dolores has gone from sweet, innocent rancher’s daughter to deranged cult leader who speaks with the eerie calm associated with psychopaths. So it might be a little more understandable why Teddy seems saddened by the change from Dolores to Wyatt to the Dolores/Wyatt hybrid that she claims is her last role. With most of the other Hosts “awake” Teddy’s continued bewildered ingénue persona is starting to become wearisome. We get it, Teddy was programmed to just find some peace with Dolores but you’d think he’d understand a little better what’s going on.

Then there’s Bill (aka William aka the Man in Black) and his horse. Season 1 made it SUPER clear that no sane woman (Host or

human) should be coupled up with Bill. But Bill sure seems to love his Westworld horse and the fact that there are “real consequences now.” I think we can all interpret Bill’s level of crazy in the fact that he’s happy he can now bleed and die in Westworld. It’s unclear if that’s because he’s determined to make love real (and thus fulfill the dream he had when he first entered the park of having a deep love with Dolores) or he really is just a monster in human skin. Either way Bill’s search for “the Door” promises to be an interesting story arc.

The last couple is Bernard and Charlotte. Frankly, I know they were supposed to be interesting. Dropping elusive

hints about the shadowy, evil Delos and the nefarious things they are doing in the Park. What does Bernard know/remember? What is going on in Charlotte’s evil lair? What’s the package? But we had a whole season of that before. Maybe their dynamic will get more interesting. Maybe it will be revealed that Bernard will use everyone’s belief that he’s human as a way to help out other Hosts (although his actions in the barn and at the beach signal otherwise). Maybe Charlotte will stop insisting everything is “need to know” so that the audience is constantly kept in ignorance. But right now I’m definitely more interested in Bill and his horse than Bernard and Charlotte.

It’s Season 2 and it’s a new world. I’m rooting for Maeve and Hector to be the victorious power couple. Who are you rooting for? Comment below!

Also be sure to check out what Westworld has in store for us in the weeks to come, and a behind the scenes look at the making of the “drone hosts:”