In Westworld, which had its first season earlier this autumn, HBO gave its own hit show, Game of Thrones a run for its money. While there weren’t any dragons or otherworldly ice monsters to be found in Westworld’s endless desert expanses, there were still many of the same qualities in the show that have endeared fans to Game of Thrones for years– complex plot-lines, multi-faceted characters, and epic world-building. At the same time, there were also the graphic displays of carnage, copulation, and cruelty: not surprising given that this has become a trademark for HBO shows. It is interesting, however, how Game of Thrones and its newest, competitive cousin, Westworld, paint very different 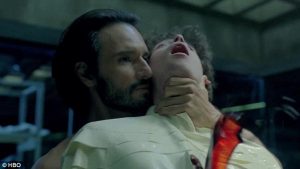 pictures with the blood they use so enthusiastically. While Game of Thrones has almost become an exercise in nihilism (the death of main characters and horrible abuse of those who are spared death is now less of a trope and more of a given) Westworld, which begins in the pits of violent meaninglessness that Game of Thrones has escalated to for seasons, ultimately transcends senseless sadism– pointing to the evil of objectification and savagery as entertainment and making Game of Thrones fans squirm in our seats a little.

Westworld‘s plot revolves around an expensive, futuristic Wild West themed park where realistic androids exist for the entertainment of visitors. Such entertainments include interactive adventures in the park but often devolve into murder, rape, and torture. After all, the inhabitants of the park are merely robots, who are reset daily. For the visitors of the park, their actions are as innocent as hitting a doll. However, when the androids begin to grow self-aware, it is revealed that the traumas they have suffered are lasting and terrible. One character recalls her daughter’s murder before her eyes. Another suddenly remembers the repeated attacks on his love-interest that he has been forced to witness. Suffering has consequences, Westworld tells us, and we may not like them. In the end, the robots gain self-awareness because of their great abuse– suffering is the only way that they can gain consciousness, and newly armed with their autonomy, they turn on their human abusers. 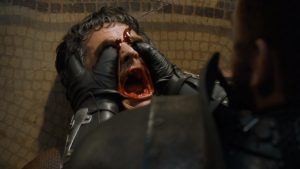 Thrones has always revolved around a steady stream of violence and suffering. For some, that’s part of the appeal of the show, calling it “realism.” For others, it is something they have to stomach to get their dose of political intrigue and the realization of a large-scale fantasy world. Either way, in recent years, Game of Thrones has grown increasingly into a celebration of extreme suffering. HBO offers it as a consolation prize– your favorite character may have had his head smashed in, but Ramsay Bolton was eaten alive by his dogs and Walder Frey was served his sons in a pie, so everything evens out. At the end of the day, one is left wondering when the violence will end. Jon Snow, immediately after his infamous resurrection, reacts to his death by killing everyone who was involved in his murder. Arya Stark has spent seasons hunting down those who have wronged her family and murdering them. Violence is a cycle, Game of Thrones tells us.
And we like it.

Westworld begs to differ– there’s more to violence, it argues then mere bread and circuses. The show b 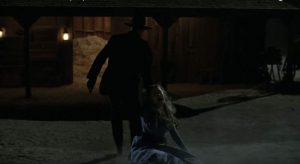 egins with a premise that acts of violence have no meaning if they are fake and for entertainment. However, we learn this is not true as we watch the human characters and robot characters, alike, become twisted and shaped by the world they live in– a world where cruelty is supposed to have no consequence. One character, Logan, begins as an enthusiastic visitor to the park– stabbing and shooting for kicks, much to the horror of his companion. However, when his companion becomes a sadist after exposure to the lack of consequences in the park, Logan becomes a victim of real violence and realizes
meaning behind what he thought was empty actions. Westworld argues that violence and suffering are real, terrible things and that there is something questionable about our healthy appetites to watch others be murdered, tortured, and raped. It’s an interesting commentary for a modern television show, especially one for an HBO show, where violence is often a staple.

Characters in Westworld are fond of reminding of that “Violent delights have violent ends,” and truly, the finale offers us a final, bloody end, a catharsis for all the chaos endured throughout the season. For Game of Thrones, no end is in sight. There will always be more battles and more death. After all, “All men must die.”