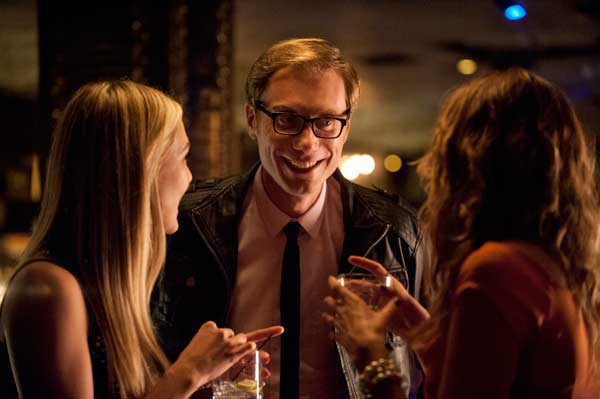 Stephen Merchant is returning to television, everyone! His new show, “Hello Ladies,” is premiering on Sunday, September 29th, at 10.30 Eastern/9.30 Central. If you don’t know who Stephen Merchant is, he worked with Ricky Gervais for many years, both onscreen in television and offscreen in radio and as television writers and producers; got the UK version of “The Office” up and running, as well as being an executive producer on the American version; has been in numerous hilarious movies like “Hot Fuzz” and “I Give It a Year”; and is a standup comedian with a comedy show titled “Hello Ladies.” Merchant has also won numerous awards for his work in television and video games.

So, with such an impressive resume, what kind of TV show can we expect from Merchant? A hilarious new addition to HBO, if the teaser trailers are any indication. Merchant himself, in an interview from February 2013, says, “It’s a show about me in LA failing to seduce women.” The show will draw on personal experiences, Merchant assures us, of his failures seducing the beautiful women of LA and the ordinary women, too: now he’s hoping to get rejected by some of the world’s most attractive women.

Teaser #2 is the most informative, so we’ll begin there. Merchant’s character, named Stewart, says that he has the ability to read women. I’m thinking, Hey, I’ve heard that line before… And the very next few scenes we see are moments where he cannot begin to understand the women or situations around him: at an outdoor party, by a limo, at a club. His tagline of “Hello ladies!” is almost a signal that bad, uncomfortable things are gonna happen. Stephen, while talking to a friend, then provides voiceover talking about how he’s a player but was once considered a nerd. “I know,” he says. “I didn’t lose my virginity until I was 23.” He even wiggles his eyebrows as if this is scandalous. His friend answers, “Whoa, I lost mine when I was 17.” Merchant’s face turns stern: “It’s not a competition.” One of Stewart’s female friends offers him the advice to just be himself. And now comes the phrase that sums up my life: “That’s terrible advice. I’ve been trying to be myself for 35 years, and that’s clearly not working.” Preach it, Stewart! Next, he tries to ask a pretty woman a question and falls into a drink freezer (just watch – I can’t explain it properly). We end with a voiceover of Stewart saying that people are dealing with a master as a lone man in a convertible drives down the street.

Another teaser posted on Merchant’s website shows Stewart and his “best mate Wade” introducing themselves. The two ladies they are talking to say “Wayne” instead, which prompts Wade to go, “Wade. As in Roe v. Wade. It’s a famous case about a woman’s right to terminate-” And Stewart interrupts him, saying that the ladies know about it and there’s no need to talk about abortion “until we need to.” 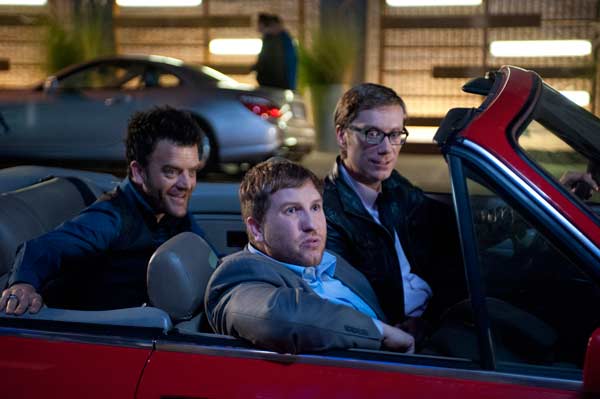 As horrible as that is – joking about abortion – we’ve all been there. We’ve ALL been there during that awkward introduction where something is misunderstood and it becomes an insert-foot-in-mouth moment. Everything just gets worse, of course, but the reality of Merchant’s show and how he captures the uncomfortable, awkward moments of dating and life are fantastic. Doing something stupid – though maybe not falling into a freezer (or maybe…) – while trying to flirt – who hasn’t been there? What Merchant is bringing to life with “Hello Ladies” is that reminder that being awkward and nerdy and yourself can be both humiliating and wonderful. This show has so much potential. As a single (self-confessed nerdy) woman, I can’t think of a new show this fall that is more suited to my taste. Sure, there’s going to be some British humor and sex jokes and some “woe is me because I’m single” going on, but, underneath that, you have a man trying to find love in today’s world. And in the end, aren’t we all?

And finally we’re treated with a behind the scenes look at the new program.  Here’s that video:

Also starring in “Hello Ladies” are Christine Wood as Jessica; Nate Torrence as Wade; Kevin Weisman as Kives, and Crista Flanagan as Marion (IMDB incorrectly shows Merchant’s character’s name as Stephen; it is actually Stewart, as can be heard in both teasers). Keep tuned to HBO and HBO Watch and more and more teaser trailers come out, and check back on September 30th for a full review of Episode 1.