It is not very often that you hear the news of who is behind the music that complements your favorite TV shows. It takes a big recognizable name to get that sort of attention. Well, the powers that be have announced that Trent Reznor and his collaborator from rock band Nine Inch Nails, Atticus Ross are composing the score for WATCHMEN. 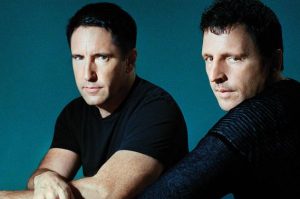 Now personally I first knew of Reznor & Ross from NIN but they have been doing quite well as a music composer for both movies and TV. The pair won their Oscar for scoring 2010’s The Social Network and also have worked on such films as Patriots Day, Gone Girl, The Girl with the Dragon Tattoo and climate-change documentary Before the Flood, along with last year’s PBS documentary The Vietnam War. Hell, Reznor, even offered up some work heard in HBO’s WESTWORLD and THE DEFIANT ONES. He even has arranged music for Rick & Morty and the documentary CitizenFour. Here peruse his credits yourself.

I don’t know, I just find it interesting that news was generated at all about this. Usually, you hear about showrunners, directors and writers that come on board a project, but you never hear of which composer/arranger signs on for a series. You usually only hear of big-name conductors like John Williams. HBO or Damon Lindelof, the man responsible for the WATCHMEN series, must have been really happy to sign up Reznor & Ross and just as happy to share that news. Either that or WATCHMEN is proving to be highly anticipated and any news, no matter how small, comes to light.

All I can think of at this point is that the WATCHMEN soundtrack is going to sound pretty awesome. Having written the above makes me want to pop in a Nine Inch Nails CD so catch you later!