TICK TOCK…the clock ticks us closer to a premiere of Damon Lindelof’s WATCHMEN. It comes our way Sunday, October 20. But before it does show creator Damon L. wants to get us a bit more familiar with the themes in the work. It is stressed that you do not need the source material, a graphic novel by Alan Moore and co-created & illustrated Dave Gibbons for DC Comics, to understand the themes set in the HBO series. Here are creator/executive producer Lindelof, director/executive producer Nicole Kassell and key members of the cast Regina King and Jeremy Irons on the upcoming WATCHMEN.

We know that heroes, evidently of any nature, are outlawed in this landscape and that that fact could set up an unsafe society in which to reside. Replacing them 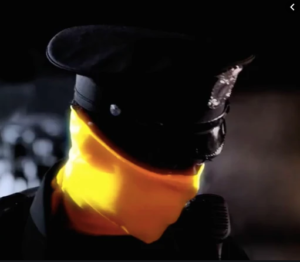 seems to be two factions. First, is the Seventh Calvary. They are the flannel-shirted thugs in the simple rucksack masks with the inkblot pattern on them. For those you don’t know that style of mask was worn by a popular character in the graphic novel and the Zach Snyder movie named Rorschach. I am sure you get the symbolism there. In all the clips we have seen of them they seem a surly bunch.

The second faction is the Police force. That is the side, as you’ve easily figured out, that Regina King’s character is on. She states in the above clip that the law enforcement needs to have the anonymity the masks provide to “protect themselves and their families.” Evidently each rank of officer sports a different style mask, but the one that stands out is the bright yellow one as that color is a signifying hue for the franchise – smiley face yellow. 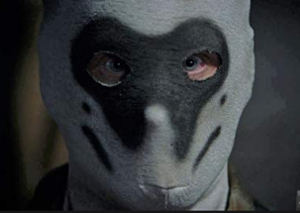 The snippets of dialogue from the series in this little featurette clearly indicate that chaos is the rule. Iron’s character said to be Ozymandias from the source material, looks on almost reveling in all the conflict. And here we are struggling with good/bad and living life, mask off/hiding in plain sight, mask on. It doesn’t really have anything to do with superheroes. It has to do with the identities of everyone else but superheroes. As Kassell says, it is about “who you are when you wear a mask, [and] who you are when you’re not wearing a mask.”  Think of it this way, it is about who you really are as a person and who you project yourself to be over the internet. Are you the same person behind the anonymity of the keyboard & monitor?

We hope an interesting series is in the offing. Time is ticking…are you intrigued by the themes revealed in this featurette? TICK. TOCK.