This week focuses the lens on Looking Glass a.k.a. Wade Tillman, portrayed by Tim Blake Nelson.  We ambiguously start with a flashback to 1985 and a carnival of some kind. A young man arrives to deliver the word of God only to be seduced and have all his clothes stolen. While inside the house of mirrors figuring out his next step, some pretty intense sounds go off and decimate almost everyone. Worst carnival ever. Turns out what we have witnessed was the catastrophic event of the graphic novel that brought the world together instead of in an arms race to die. Three million souls lost their lives that day on 11/2 and now we know one of the survivors.

Fast forward to the present day and Wade works as an analyst for focus groups.  He can tell when people are lying and uses this to help sell products. I’d love to know what about his life trajectory changed the night of 11/2 and how he went from a sweet, religious boy to now being able to read people like a human lie detector. Laurie Blake (Jean Smart) wants more dirt on Angela/Sister Night (Regina King). She knows something is going on and wants the dirt. She’s not wrong.  There is definitely stuff going on.  But she also wants to find the 7th Kavalry church and sends everyone on a search. “Go get me some religion” had me chuckling for a while. Looking Glass won’t give up anything on Sister Night yet, but she’s pushing him to get answers. Sister Night, that is. After handing over her grandfather’s pills, she’s anxiously tapping her toes waiting for the answer. Wade makes a visit to his ex Cynthia (Eileen Grubba) who works in a pet cloning lab.  Talk about some interesting technology advances. The pills are Nostalgia, containing the memories of her grandfather. It’s since been outlawed for its dangerous effects. 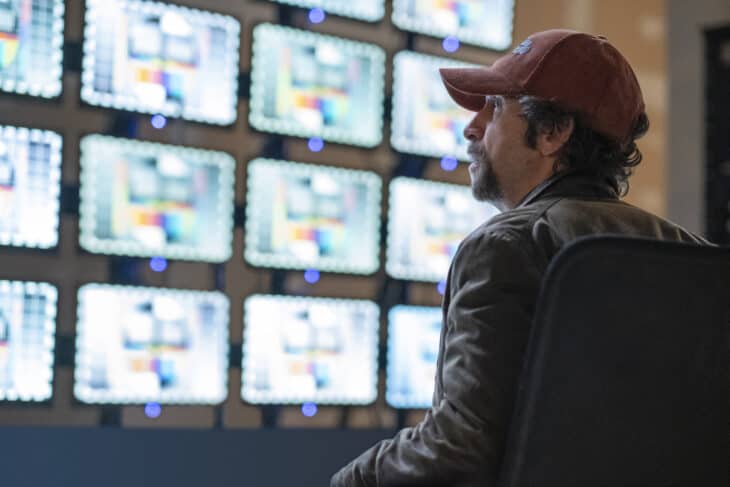 Wade eventually makes his way to a meeting for something called extradimensional anxiety. He kinda-sorta hits it off with a girl (Paula Malcolmson) though she plays coy. They end up at a bar and sparks seem to be flying.  She gets a ride home from a friend with a lettuce truck… Well, sh*t. Way to pick ’em, Wade. He follows them and finds everything and more than he truly bargained for. It’s not the church he’s been looking for but a set in an abandoned building. Also in the abandoned building is a dimensional portal they’ve been playing with because you know, that’s safe. Well, we know Police Chief Judd (Don Johnson) was 7K but apparently Senator Keene (James Wolk) is as well; pretty high up actually, kind of a leader. What’s the adage about not trusting politicians? Keene lets LG in on the secret that it was all a set-up by Adrian Veidt (Jeremy Irons); basically an amazing follow-through from the graphic novel to connect the stories in the universe. Wade has a choice to turn in Sister Night or rat on the 7th Kavalry and take the consequences.  He traps her into spilling her own beans into his bugged cactus. But she’s not going down without being difficult and swallows the evidence. I can’t wait to see how her fever dream pans out next episode. But mostly, massive props to Tim Blake Nelson for his amazing portrayal this week.  His whole life has been built around this event and what it did to him, and now he’s found out that it’s all a lie.  What’s going to happen with him next?  Then there is also Adrian who is launching himself into space because he’s apparently trapped in an alternate dimension or something…  So far this show has been a ride and I am here for it, can’t you tell?