This episode will go down in history as one of the finest hours of TV in recent years. 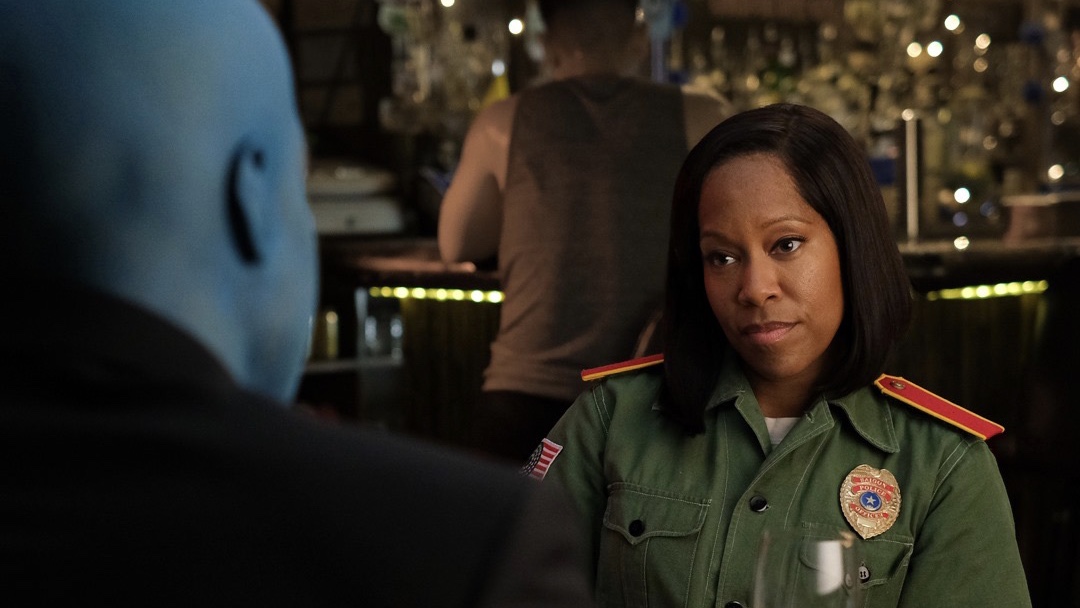 *This article will contain spoilers. Normally I try to avoid it but you can’t really talk about this episode without talking about the plot. Enter at your own risk.*

Back in 2004, Damon Lindelof co-created a new kind of television with Lost. His brilliant mind worked in ways that were complex (maybe too complex for petty audience members that love to argue with their TV screen) and came from a place of sheer curiosity of things like the perception of time, the possibility of parallel universes, and the unexplained. You can see this curiosity in almost every one of his projects, and that’s how you know he’s really interested in these subjects. Another thing that was a common thing in Lindelof’s works was centric episodes: we take an episode and devote it entirely to one character. Sure, other characters were there, but it’s always connected to the story we’re telling about one or two characters. He does this in a very unique Lindelof way, you can see it on Lost and on HBO’s The Leftovers. Even episode 5 of Watchmen was a Looking-Glass-centric

piece. A lot of the times, these types of installments were really special episodes that feel really significant, like the Matt Jamison centric episodes on The Leftovers.

Last week I was here covering the 7th episode of Watchmen, that ended with the return (or appearance, for those who don’t know the origin story) of Dr. Manhattan – the legendary blue almighty being that was once Jon Osterman and became Dr. Manhattan due to a lab accident. Lindelof does take us back there, but not before we know all the info. And now, this week, we get another centric episode. But really, this one feels exactly like the Jamison-centric episodes on Leftovers (we’ll get back to that later).

“I don’t experience the concept of ‘before’”, says Dr. Manhattan. Well, we just did. The episode starts in the past. It’s a day of celebration in Saigon, the annual day in which Dr. Manhattan has won the Vietnam War, so everybody is covered in blue paint and Dr. Manhattan masks. A blue character picks up a Dr. Manhattan mask, puts it on and walks into a bar, while the episode’s title is written – “A God Walks Into a Bar.” Sounds like a beginning of a joke, and a younger Angela Abar, who sits there in the bar, really thinks it is a joke when the character approaches her and tells her he really IS Dr. Manhattan, and that they’re gonna be in love soon. He knows it, because he knows the future, of course. 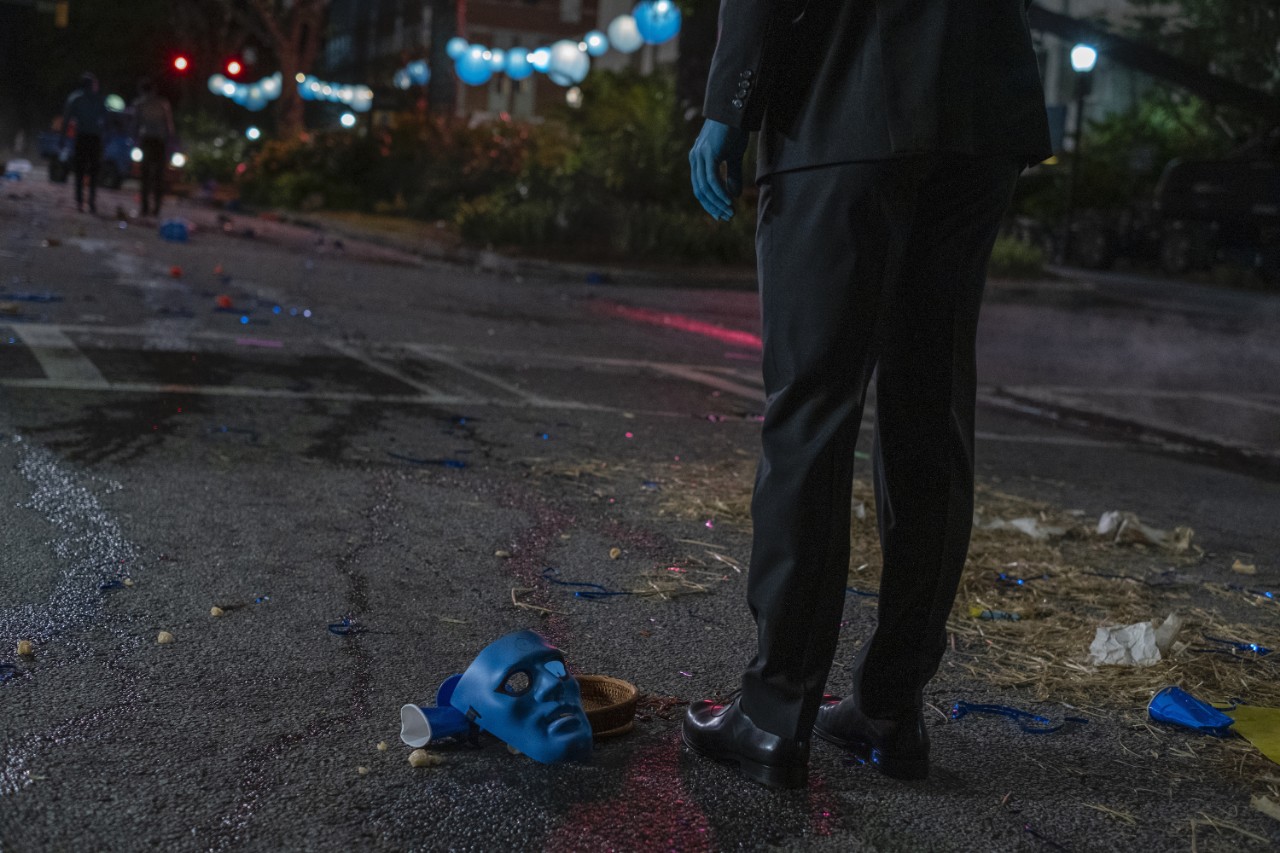 Angela asks for proof that he really is him (or should I say Him?), and then, the episode starts to get interesting. He tells her stories about how he knows the future, and how for him time is not like our time – he experiences everything simultaneously, so the episode jumps between periods of time that for us (and for Angela) are years apart from each other, but for Dr. Manhattan – it happens all at once. Think about it this way: for him, the episode is linear, while for us it’s jumping back and forth between several places and times. And THAT, my friends – is CLASSIC Lindelof. And that’s why I love him so much. Only he could think of, and execute so brilliantly, an episode like this one.

When we finally go back to where episode 7 left us, we already know the whole story, and it all seems really clear to us – how we got there exactly, including some events from earlier this season that we now know the meaning of. And yes, that includes the Adrian Veidt situation that I said I’m not sure will be explained. Some of these reveals will make you go “ohhh!!”.

Normally, I’d say here: “and now, let’s talk about Trent Reznor and Atticus Ross!”, but for the most part, this episode’s soundtrack consists of songs and existing music. But, when we do arrive at where we were, Trent & Atticus come back with what I think is only 2 pieces of music, that are just brilliant. Especially the one on the final scene, it gave me chills, and then I thought “Trent, Atticus, you’ve done it again”.

The episode ends with a fantastic sequence that finishes a chapter in the story. I’d say that now, it really FEELS like we’re coming to the end, and there is only one episode left. I said before that nobody knows if there will be another season for this. It wasn’t announced as a Mini-Series, but Lindelof said he wrote a standalone season for now. I really hope there’s more, but even if not, it seems like we’re nearing a really solid ending.

The episode was co-written by Lindelof and Jeff Jensen, who doesn’t have a lot of writing credits, except for Brad Bird’s film Tomorrowland (with Hugh Laurie), which he co-wrote with… Lindelof. The writing was just exceptional. On the director’s chair, it’s Nicole Kassell, once again, who already brilliantly directed the first two of the season. But, there’s another really good piece of trivia about her: she directed 2 of the 3 Matt Jamison-centric episodes on The Leftovers! No wonder it felt like that to me! (Note that I didn’t remember that while watching). But anyway, she’s an incredible director, and directing a complex episode like this must be tough, but a satisfying job, especially when it comes out THIS good.

This episode, like a lot of episodes Lindelof has written in the past, treats the intelligence of the audience very seriously. It’s the kind of episode you feel like you’ve watched a really strong piece of television when it ends (including the after-credits scene; there is one!). It’s an episode that is built JUST right, reveals itself to you bit by bit, and after you know everything, it gives you 1-2 amazing extra scenes.

By the way, I already know the original “Watchmen” story, so I know how the story we’re seeing now connects to it, but I wonder what it’s like for people who’ve never read or watched Watchmen, how understandable is it without understanding the references. 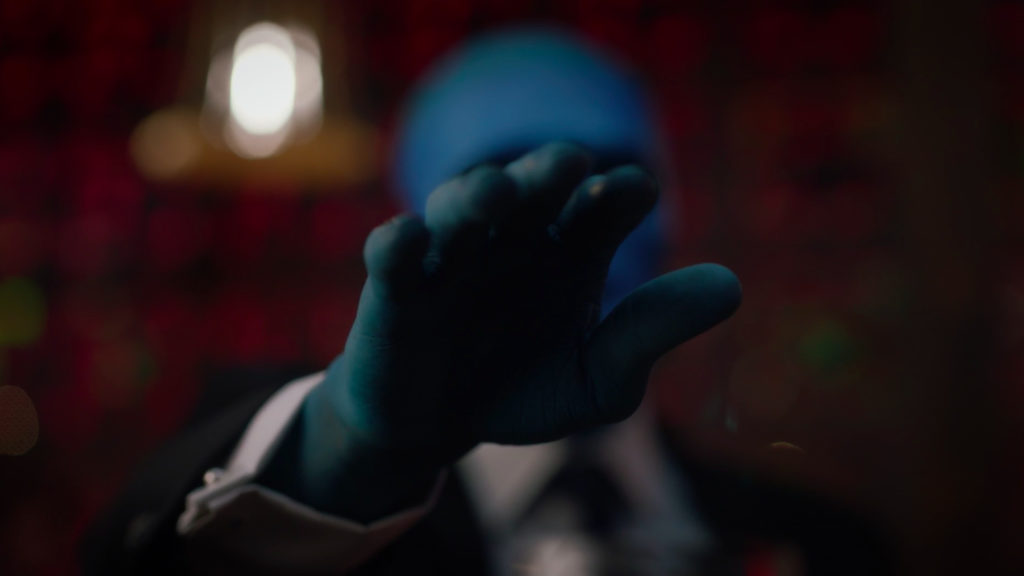 I really want to see what’s next and how that genius, Damon Lindelof, has planned out the ending of the first season. He really maxed out on opportunities and stories this season and I loved it all. You can see that it was planned to care about quality more than quantity because there is an unusual number of episodes in the season – 9. And it’s bittersweet, because – yeah, next week it ends. But, as Dr. Manhattan once said – nothing ever ends, so… season 2, HBO? What do you say?

We go out with a preview of the final episode.