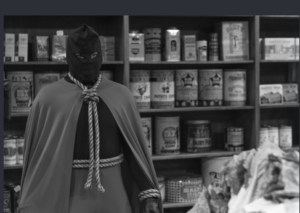 A Song of Ice and Fire series author George RR. Martin loves conversing with fans, but has an aversion to fan-fiction. The revered novelist and television writer/producer believes that fan-fiction is a bad practice, and adds nothing to literature. Bear with me, I am on to something. Hence, when the announcement came that Damon Lindelof was creating a sequel to the graphic novel WATCHMEN, I was cautiously optimistic. The first two episodes were great television, but even with breadcrumbs such as radioactive squid falling from the sky and other nuances from the 1986-1987 source material being laid, I saw HBO’s version of WATCHMEN as great standalone material.  Episodes three, four, and five featured major events of the graphic novel matriculate into the series, particularly the arrival and aftermath of Adrien Veidt’s psychic wave emitting giant squid-like creature. The sixth episode, “This Extraordinary Being”, presents viewers and intransigent fans of the comic series, with a story that is clearly helmed by artists that are arguably as talented as the writer of the original material. HBO’s newest Sunday 9pm programming block isn’t mere fan fiction; it is well-crafted and executed entertainment by professionals who are admirers of high-level past work that inspired them to become professional writers. This particular episode is a masterclass of nonlinear storytelling, which is indicative of WATCHMEN lore.  Mild spoilers and one enormous spoiler are ahead in an episode of premium cable so intense that the following disclaimer appeared on the screen before the episode – “This Episode Contains Scenes with a Strobing Effect That May Affect Photosensitive Viewers.”

Officer Angela Abar is in a Tulsa, Oklahoma Police Department holding cell, for charges of withholding evidence to the murder of the PD’s police chief. FBI Agent Laurie Blake (and later her summoned husband) is pleading with Abar to sign medical consent forms to have her stomach pumped free of the nostalgia pills that 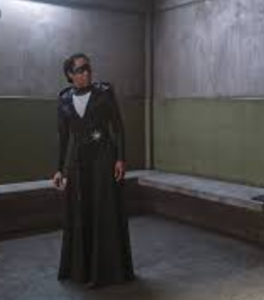 she induced in the previous episode. This plea fails as Abar falls comatose. The coma is a segue into her grandfather’s tumultuous past and is captured in magnificent black & white cinematography. A young William Reeves has passed all requirements of the New York City police academy, yet he is not given the same recognition as his white counterparts at the commencement ceremony. Only his future wife June, a reporter for an African American newspaper, and NYC’s first black police officer are congratulatory. The latter warns the rookie cop to “beware of the cyclops.” This cryptic message baffles Reeves, unknowing that he will have a blood-soaked battle with the Ku Klux Klan affiliated cyclops organization.

The b&w cinematography is not just a matter-of-fact decision. The absence of color highlights the strong racial divide of pre-WWII America and also hides the claustrophobic set piece that houses the story of this episode. We are flies on the wall watching the biggest unveil (albeit some sleuths have hypothesized all along) of the series thus far- William Reeves is the vigilante, Hooded Justice. Hooded Justice was the only superhero in the WATCHMEN comic that did not reveal their identity to fellow superheroes.  In the story-within-a-story, “American Hero Story” depicts Hooded Justice as a white male vigilante who is a closeted homosexual.  In one episode, Hooded Justice saves the owner and employees of the store from a would-be-robber. Only fragments of this are true, as we learn through the eyes of Will Reeves, that the store was a front 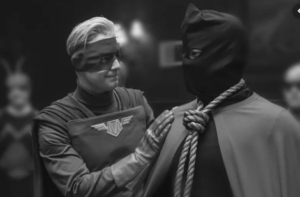 that concealed the operations of the Cyclops organization. Reeves arrests a man for torching a Jewish convenient store. The man, who is the owner of the chain of stores hiding the lairs of the Cyclops, tells officers that Will is lying about the arson incident. The officer seemingly rebukes the man for committing blasphemy against their fellow officer. However, when Will realizes the man was released, his supposed brothers-in-arms, put an execution mask over his head, and string him up from a tree. The racists cut him down before he dies, and warn to stay out of white people’s business. Will is psychologically damaged more than physically and keeps the noose around his neck, as he stumbles from his would-be execution spot.

Most of the superheroes of the DC universe adopt a persona that is opposite to the actual personality. Bruce Wayne embraced his fear of bats and used it as a symbol to strike fear into criminals.  Superman lived a happy but isolated life as Clark Kent, and as the man of steel, he flipped his introvert personality to save lives worldwide. On the very night of his near-death, William Reeves dons a noose and execution mask, symbols of oppression and death, and saves a couple from being robbed and killed by assailants. He channels his anger that he held on to from the 1921 Tulsa City Riots and the ostracizing at the NYC police department and becomes an inspiration that is the catalyst for the ‘Minutemen’, an organization of vigilantes that were the precursor to the original Watchmen. Yet, Will Reeves has to hide his identity from the Minutemen, with the exception of one member who deduced Will was the man behind the mask, for that organization has prejudice members in their ranks. When Will asks that one member for help with the Cyclops organization, the answer is no, despite Will fighting their battles. Will fighting the fight for people that will not fight his fight is a crafty but on-the-nose nod to the equality struggle that has always plagued America. Will goes so far with the Hooded Justice persona, that his once all supporting wife, 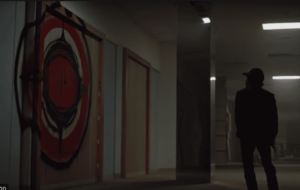 leaves him to return to Tulsa with their young son. Thus, this is why Angela never knew her estranged grandfather. The episode concludes with Angela awakening from the coma in one of Lady Trieu’s medical facilities. Whew…that is a lot to take in one episode. So much that this reviewer had to view this installment twice to capture the specifics, and I am certain that I still missed particulars. Fell free to share if I did.

This post could be 2-3 times longer if I decided not to keep going down the rabbit hole to extract information.  At a running length of just shy of an hour, the plot felt like an engaging two-hour feature film. “Beware of the Cyclops” is one of the most ominous warnings to have been spoken onscreen and my words will not give this phrase any justice. However, I leave the reader with the following thought:  A certain device created by the Cyclops organization was the cause of Chief Crawford’s death in the pilot episode, yet not by the hands that one would straightaway suspect.

Beware of missing the next entry of WATCHMEN on December 1, 2019 at 9pm on HBO. Here is a preview –