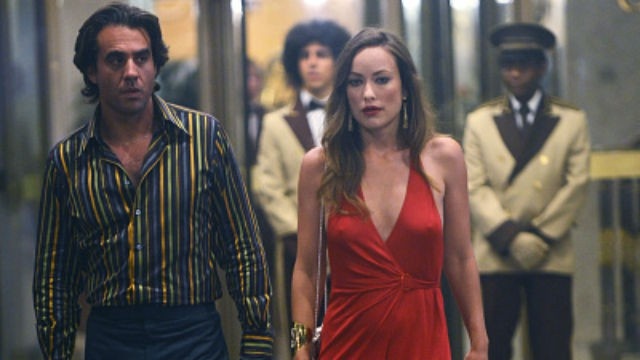 It’s hard to top the opening scene of Vinyl‘s pilot episode. It captured the reason the show exists: the visceral love people can feel for music. If you don’t open yourself to being moved by music, you can’t really “get” a series like Vinyl. One can look down on art as a calling because it is a luxury: we do not NEED art to survive…yet, for many of us, art makes life worth living.

This is the crossroads where protagonist Richie Finestra finds himself. He LOVES music; he built a career on the thing he loves most. But it is a career, and people depend on his ability to sell art. After his epiphany in Mercer Arts, Richie decides that he cannot sell his beloved company to Polygram, and he makes this decision without consulting with his partners Zak Yankovich (Ray Romano) and Skip Fontaine (J.C. MacKenzie). The deal with Polygram would have saved  Richie’s flailing American Century Records, albeit with staff cutbacks. The partners were counting on the Polygram money to salvage their own personal finances. Instead, Richie shows up in the morning with a new dictum for his bewildered employees: find new acts, great acts. Richie believes he can rescue American Century without selling out. His employees seem less sure.

After the situation among the partners devolves into blows, Episode 2 gives us greater insight into Zak, the company’s Head of Promotions. Ray Romano is brilliant in the role, and he plays Zak with an understated sadness that creates a large contrast with Richie’s larger-than-life emotions. Zak is in an loveless marriage, bleeding money he doesn’t have to maintain his family’s lavish lifestyle, and he now discovers that his partner has vetoed a deal that he desperately needed in order to get back in the black. He contemplates a bottle of Valium. What path is left for him now? 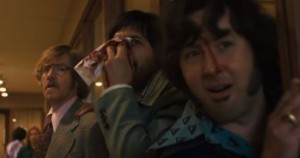 wers discovered in the pilot, Zak is simply the latest in a long line of people who have suffered for Richie Finestra’s decisions. Lester Grimes lost his voice and his means for a good living when Richie left him in the hands of the mob in the previous episode. Devon Finestra has lost a lot also. A former Warhol girl, the intellectually curious Devon tries to find fulfillment in her life as a suburban mother. As she tries to piece together Richie’s state of mind, she mistakenly leaves her children in a diner. The children, the house, the constant absences of the man she married; these are all making Devon question her life choices. When she accuses Richie of not being satisfied with the life they’ve built, she could be talking about herself. I appreciated the fact that Vinyl took the time to delve into Devon’s internal life (during an exquisite Karen Carpenter fantasy sequence). Most series take the wife character’s sacrifices as a fait accompli, one requiring no hesitation, much less ambigiuity. Where Vinyl fails (so far) is in letting us know what Devon left behind. What was her ambition? She carries a camera; was that a career path she intended to pursue? Was she good? We don’t know much about her professional, artistic, and intellectual ambitions, beyond the fact that she enjoyed hanging out with Andy Warhol and listening to great music. 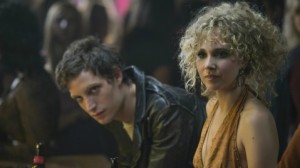 So far, only Jamie seems to be benefitting from Richie’s new directive. As a young woman into the music scene, she is the target audience for the bands that Richie wants to find. She is on the ground. People often forget that young girls “discovered” the Beatles and David Bowie long before other demographics. Jamie’s story works on two levels: her personal struggle as a woman to succeed in a business that is dominated by men, and the fact that her character’s closeness to the music echoes the series’ own mission statement which is to showcase good music. So far, her push for the Nasty Bits has not jumpstarted her own career, but she remains hopeful that their raw stage presence will launch the boys and herself onto a higher plane. In the role, Juno Temple is both fierce and desperate. I should take this moment to comment on James Jagger’s performance as Kip, frontman of the Nasty Bits. I came onto the series expecting little from Mick Jagger’s son, not based on past experience with the man’s work, but based on the notion that children of rockstars often prove to be faint echoes of their fathers. This is not the case with James Jagger. He has the presence and the swagger, combined with an unexpected vulnerability, that make Kip very compelling. I hope to see more of him. 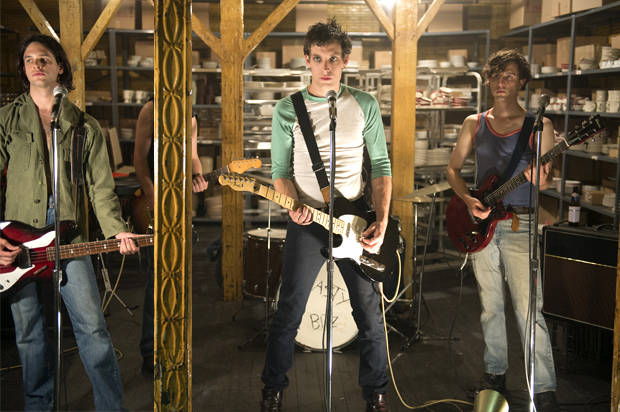 Finally, but most crucially, there’s the music. If Vinyl is to succeed, it needs to capture that emotion from the opening scene. Last week, the series went all out with its presentation of the New York Dolls, but they under-delivered on Led Zeppelin. This week, I was surprised to see that the Karen Carpenter number out-performed Lou Reed and the Velvet Underground. There is a reason the latter group is so influential, but you wouldn’t know it from the rather weak performance of re-enactors in Episode 2. By contrast, Karen Carpenter’s “Yesterday Once Again,” from which the episode derives its name, is a quiet, haunting moment that truly maps where Devon is, both visually and aurally. In terms of other tracks in this week’s outing, David Bowie’s “The Jean Genie” makes a splash as Richie returns to the office after the Mercer Arts collapse, but the episode lacked the impact of the wondrous sequence of the pilot, when Richie was driven around the dangerous, dark streets of New York to the sounds of Mott the Hoople, Rare Earth, and James Brown (among others). I can’t wait to see/hear the acts that will be visiting Richie’s New York in the coming episodes. Particularly, the presence of Lester Grimes as a character makes me hopeful that the African American experience will be portrayed on the show.  The music of black American acts inspired many of the famous white groups of the era, and I would like to see more of this music.

As of two episodes in, Vinyl remains compelling television. New York, the 1970s, and the music industry are rich fountains of inspiration, and I hope the series takes advantage of them. I remain skeptical about the murder subplot; I feel it’s too much, too soon. The company’s imminent bankruptcy and power struggles provided enough dramatic impetus to drive the narrative. On the other hand, some very nefarious characters have always lingered on the fringes of the music industry, so it is not surprising that murder would be in play. Richie has not yet been connected to the murder of Buck Rogers in the previous episode, but the threat is still hanging over his head. Right now, his attention has been turned to Lester Grimes. Can Richie make things right for someone whose life he ruined? For any of the people he has just stepped over? I guess we’ll see.

How about this bonus: THE PLAYLIST from Episode # 02

“Sweet and Dandy” by The Toots and the Maytals

“Love Train” by The Confidentials

“Yesterday Once More” by Aimee Mann

“I’ll Take Care Of You” by Bobby Blue Bland

“Everything I Do Goin’ Be Funky” by Don Covay

“Under My Thumb” by The Rolling Stones

“Night Comes Down” by Mickey Finn