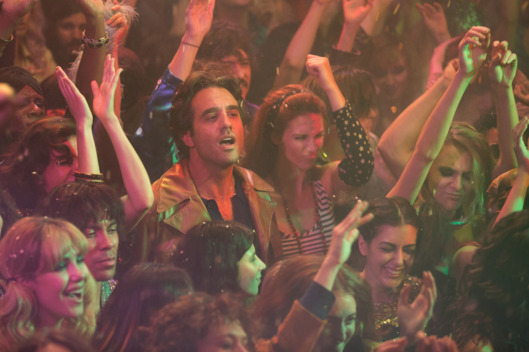 These are just some of the things that Richie Finestra, President of American Century Record Label, deals with on a daily basis. Ah, Richie. What do you say about a guy who has a sharp ear for musical talent, a nose covered in cocaine and a head for business?

Richie first appears on screen, in his Mercedes Benz, parked on the street. It’s dark; he looks panicked, almost desperate and scores some drugs from two sleazy looking guys in the dingy neighborhood he’s in. While in the midst of cocaine induced haze, he finds a police detective’s card. Hmm, can we add murder to the list above? He ends up walking to a club and through it, where the lights are dim, the people are engaged in all sorts of lurid activities and the music is loud. The crowd is going crazy, in the best sense of the word. Richie stands there, amazed and taking the scene in. The group that is playing is The New York Dolls. Richie is entranced.

Richie’s world is filled with fast-paced record deals, promotions and mob influence. Having to deal with staff that are lackluster, a bully for a radio station chain owner, drugs to enhance deals and payoffs and countless meetings with various stakeholders. Add to the pressure that Richie and his partners are teetering on the edge of the music scene: the beginnings of disco and punk rock are emerging and they face a few challenges with the company, you wonder why Richie isn’t lying face down in a ditch somewhere, completely drugged out of his mind. 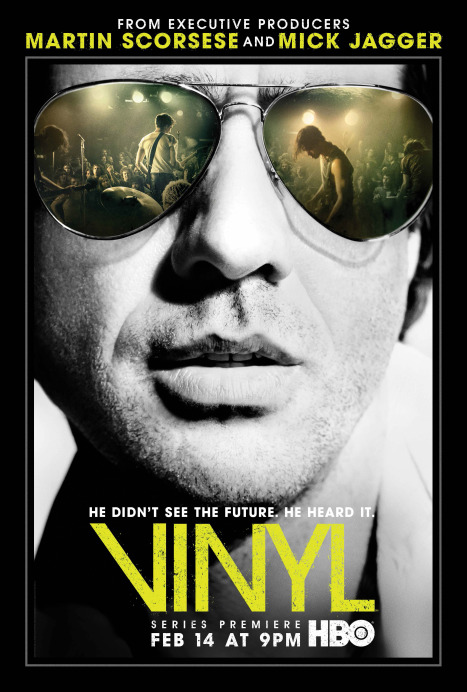 The attention to detail is tight: the costumes, music and big names are ever present. Big names, such as Abba, Donny Osmond, the New York Dolls, Led Zeppelin (including two actors who fit drummer John Bonham and Robert Plant right down to their accents), dress and mannerisms, as well as a man who impersonates their notoriously hot tempered manager with eerie resemblance are dropped on the show. In the music business, it’s a who’s who and who’s signing who that matters. In a decade that saw funk, rock and roll and disco emerge as the most popular music genres to hit the airwaves, club scenes and dance floors, Vinyl delivers big on the songs, the feel of the music industry and the highs and lows of the people working the deals. We get a few glimpses into Richie’s rise from bartender, to manager to president of the company. Somewhere, on the way to riches and glory, Richie developed an ear for talent but sadly for one of his clients, dreams of music and stardom did not come true.

Several flashbacks let us know that Richie started as a humble bartender working in jazz and blues clubs with a fine ear for a good tune and harmony. After becoming a manager to Lester Grimes, a talented musician, we see that all didn’t work out so well. Richie begins his ascent into power, forgetting about helping his friend out and moves on. This registers in Richie’s face when he has a chance encounter with Lester (years later) while driving through New York. It seems Richie liked power more than loyalty. Lester got a raw deal and never sang again.

Richie is in a fast paced, exciting industry in New York and yet, his domestic life in Connecticut is dull and static. Richie is keeping the company afloat, but for how long? A lucrative deal with Led Zeppelin falls flat and tempers flare. Richie’s partners, Zak (Ray Romano), PJ (Scott Leavitt), Skip (JC Mackenize) and assistant Jamie (Juno Temple) navigate the murky waters of wheeling and dealing. Jamie ends up sleeping with a singer from The Nasty Bits, in an attempt to connect to what music is popular, while trying to get in Richie’s good graces and moving up the corporate ladder. So far, she has succeeded by finding one band. I suspect that Jamie will become Richie’s protégée before too long.

Richie has to contend with mishaps that turn into potentially life threatening situations (visiting drugged up Buck Rogers, played by raunch-master Andrew Dice Clay, was not in his best interest) and desperately tries to stay away from alcohol and drugs. Visiting Buck, trying to listen to him while he was on a cocaine binge leaves Richie bewildered, wondering what the real reason was for him to leave his own birthday party to put up with Buck’s outrageous antics? The only intelligent thing Buck says during the encounter is how he watched Frankenstein as a kid and even as an adult, the movie scared him but at the 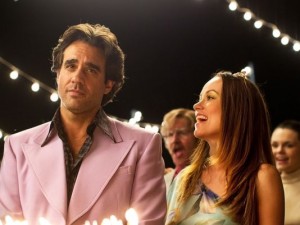 same time, it forced him to face his fears. Let’s throw in a much unexpected violent encounter that leads to murder, shall we? How is Richie going to cope with all the industry strain? He has to contend with his home life and his wife, Devon, who used to be some sort of party girl and hung around the likes of Andy Warhol – she isn’t too impressed with his drinking and rock and roll lifestyle. The 1970s were all about excess – the me, me, me decade: how much could a person spend on themselves; how flashy you could be; what was the most expensive car to drive; trips to take; house to live in? So, now with all this happening, Richie really needs to take a good look at himself and face his own fears: what is he so scared of? Will he be able to steer his company back into the limelight? Is he going to put some solid effort into his marriage with Devon?

This brings us back to Richie, that dark night in his Mercedes Benz, which led to the cocaine induced mist of musical exploration in a club. While impressed with the energy of the band and the crowd swaying and jumping to their sounds, the building is brought down. Literally. Cracks in the building bring panic, chaos and destruction, not to mention dust, dirt, wires and debris all over the fans who weren’t smart enough (or sober enough) to get the hell out of the building before it imploded. Like a monster rising out of a grave eerily enough – it gives Richie hope that things will perhaps work out for the better and off he goes into the night, with dirt all over and a smile on his face.

Looks like this guy is made of tough stock. But then that is just my take on it all. Below is writer Terence Winter’ perspective on the premiere.

How about this bonus: THE PLAYLIST FROM Episode # 01

“Its Just Begun” by The Jimmy Castory Bunch

“Slipping Into The Darkness” by Soda Machine

“I Just Want to Make Love To You” by Foghat

“All the Way From Memphis” by Mott the Hopple

“The Hand Clapping Song” by The Meters

“Mama He Treats Your Daughter Mean” by Ruth Brown