Well, that’s all folks! Vinyl has reached its closing scene, we have landed back on the ground after flying high in the rip-roaring world of 1970’s New York. Have no fear though as HBO have confirmed that a second season will be happening so that final, awkward and intense stare between Richie and Zak will be explained…along with a whole load of other things that have been left open ended. 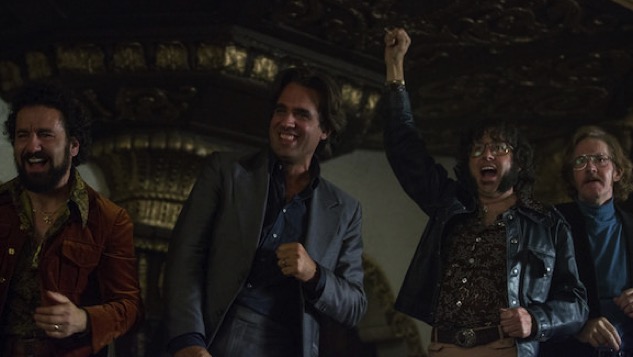 The season finale mirrored the season premiere in that we were back at a New York Dolls gig, someone was murdered, Richie was sober and just to give it an extra kicker the over stylized look of the premiere was reprised with some delicious slow motion shots of Kip spitting out his words on stage. It was everything a season finale should be, it was explosive, dramatic, intense and opened the door for the next chapter. Everything in the season so far has been building up to this last episode and the last hurrah for Richie and American Century Records. Things have certainly been circling the drain for quite some time and entering into a deal with big time gangster Carrado Galasso was definitely not Richie and Zak’s smartest move, but since Richie lost $90k at the casino, they sort of didn’t really have a choice, especially as Richie’s incessant drive for success over powers everything else. The thing that makes Galasso so terrifying is his unpredictability and what kind of thing will make him give the nod to his henchmen. Zak visits him in a heavily guarded cafe and tells him of his woes of Richie and that he is planning on ousting Richie from American Century. Galasso’s demeanor suggests that he is on Zaks’s side and they will sort something out together, so when Galasso and his mob turn up at Richie’s office and shut the blinds, you expect the worst. However, Galasso is pissed at Zak for ratting on his partner, making him doubt the sanctity of their arrangement. Richie, who took the deal with the cops to be their informant on Galasso, leaves his office bugged and the cops are able to listen in on the dealings. Something that almost gets Zak and Richie killed in an intense and deadly meeting about one of his chop shops getting busted by cops only a few hours after telling Richie and Zak about its existence. Either way, we knew Galasso was not someone you wanted to mess with and this scene sure did quantify that fact. 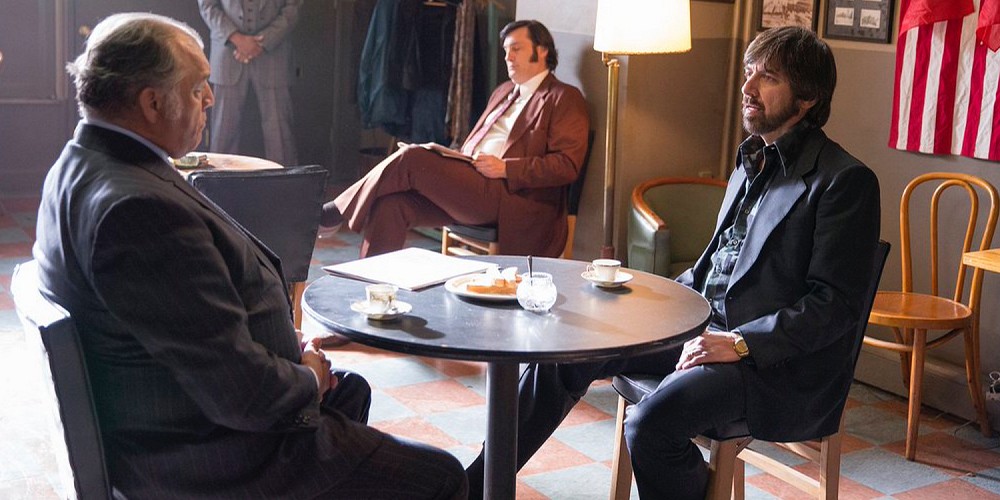 If it wasn’t the gangsters getting in the way of Richie’s launch of Alibi Records, its his launch act The Nasty Bits, helmed by Kip Stevens, who goes on a major bender when Jamie tells him she has feelings for their lead guitarist. He injects himself with the mother-load of heroin and is discovered on the bathroom floor of his apartment by Jamie and Lester. It couldn’t be more of a classic rock n’ roll scene, the tragic lead singer, overdosing on the bathroom floor, hours before he plays the gig of his life. They get him to the show and Richie, taking charge of the situation and recognizing that they only have ten minutes before going on stage, injects him with cocaine to bring him back up again. The Nasty Bits walk out to a booing crowd and rip the place apart with their song “Woman Like You”, which is only short lived as the cops arrive and arrest the band on profanity charges. Richie, trying to get the publicity the band needs, is the one who calls the cops and the crowd goes wild. 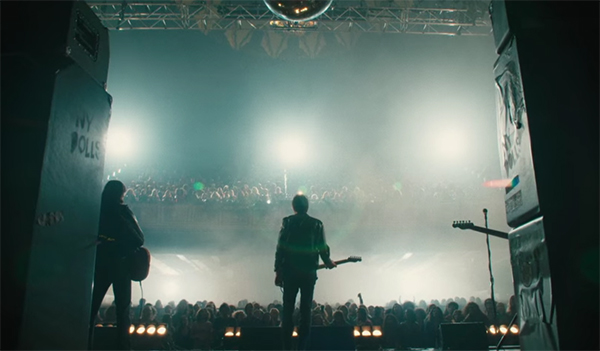 Back at the office, the Alibi Records launch party is under way and Richie loads everyone up with spray paints and tells them to trash the place. The carnage and the chaos taking place all around him as the transformation manifests itself amidst a barrage of alcohol, drugs and total madness. If there was any doubt in your mind about who the real boss of American Century is, it all melts away in these final few scenes. Andy and Zak who have both been playing the boss in this episode and others as Richie has been snorting himself into oblivion are left cowering in Richie’s shadow as he rises up and everything he has been working for, lying for and borrowing money for comes to fruition. Whether or not it is enough to clear his debts and bring the company back up to the dizzying heights of its heyday is unclear, but was is clear is that Richie is not to be messed with and he is not to be doubted. 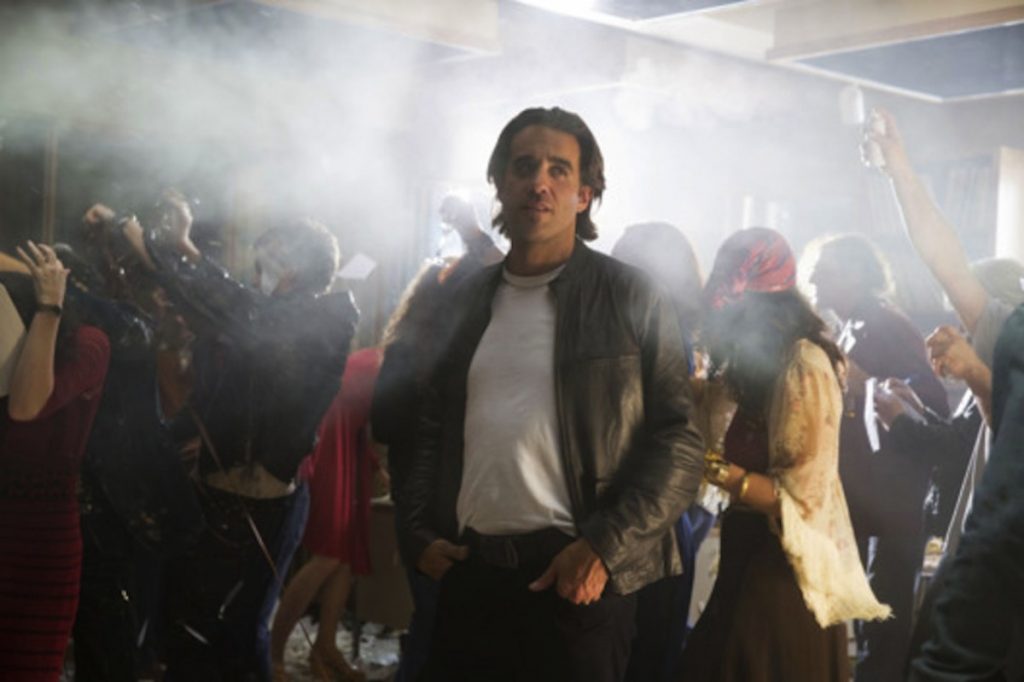 My absolute favorite scene of this entire episode was at the end when Richie meets with one of the cops he made the informant deal with in a seedy looking bar. Despite everything that happened with Galasso in this episode, Richie makes something up about how a couple of his henchmen were wearing similar raincoats so might have intercepted a shipment. The ball is entirely in Richie’s court and as long as he lets the cops believe he is playing along and doesn’t actually tell them anything about Galasso, he is safe from both parties. The bar owner asks whether Richie knows what a ‘gormandizer’ is, Richie says no and the owner explains he is planning on renaming the bar and getting some live music in. Some country, bluegrass, blues and fans other music for uplifting gormandizers, in other words C.B.G.B O.M.F.U.G. Capturing the era has been a major theme throughout the entire season, with the emergence of punk music, the rise of Donny Osmond, the beginnings of David Bowie and the explosion of Queen but to have this final moment, as a barman tells of his plan to open the most famous music venue in New York, a place where history will be made for some many bands, is a really exciting idea. The fact that the rise of this bar and the music within may be a prominent feature in the next season is enough to keep me watching. 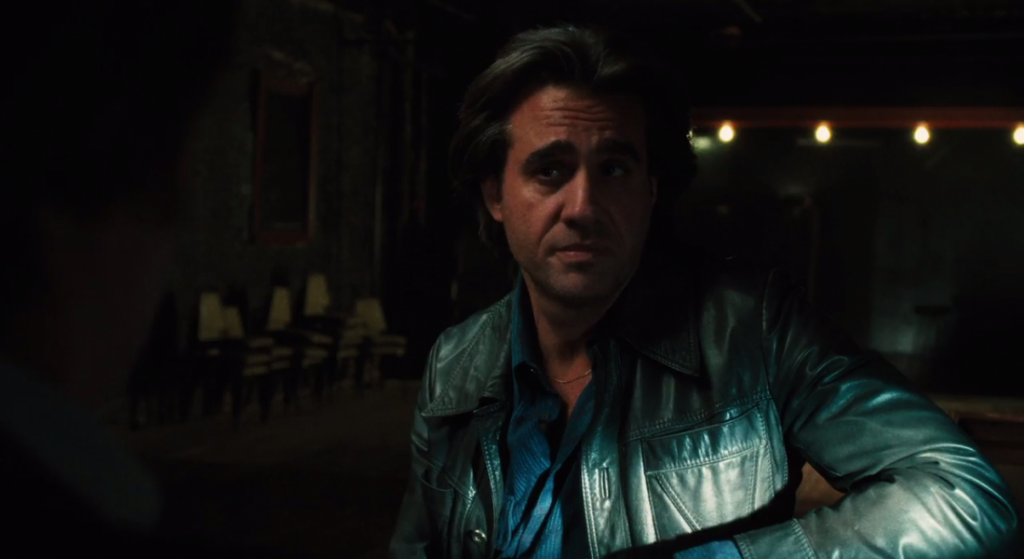 The absence of Devon and the kids in this episode just showed how Richie’s professional life is not dictated by his personal life. He doesn’t need Devon in that part of his life, despite what she may think, he can manage it on his own and without her influence. He confessed to her his crimes at the end of the episode so it was a bit odd that it wasn’t followed up in this episode the loose ends weren’t tied up, but it was important for her not to be in this episode. Richie may have lost his way and been a bit of a dick to her, but she is having a full on affair with another man and fobbing the kids off on her inept friend. She is just as bad as he is sometimes and they are each others own worst enemy. I don’t envisage a reconciliation on the horizon because U think Richie is going to go it alone in all aspects of his life. He has been so heavily influenced by everyone around him and everything around him that he has made is horrible decisions.

There is nothing worse than seeing your hero fail, which is what has made this series so compelling. To see him rise up out of the ashes of American Century and into the open arms of Alibi Records is a satisfying and pleasing ending. The taste left on your tongue is that of riotous success and hidden threats. The label is on the up, but at what cost?

Check out the epic track list from this episode below: