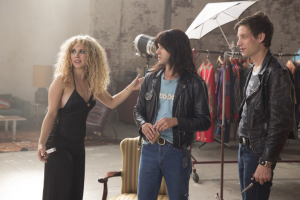 Rock and Roll in the 1970s was a hectic, drug infused, frantically paced business. Add plenty of sexual encounters, drugs to seal potential deals and lucrative promises of sell out records, plus legions of fans and cold hard cash and you get the idea. Wow, what a wild time! As for American Century Records, it continues to take a pummeling in every which way. Colleagues test each other’s limits; bad decisions are followed by even worse consequences and relationships are strained and put to the test.

I don’t even know what to say about Richie and Devon. It’s clear they are not getting back together – too many lies between the two; mutual infidelity and the never ending abuse of drugs has worn this couple down to nothing but dust. Mob money to try and help save a business never turns out good. Throw in some crooked looking police detectives and a hot-shot state attorney who wants to nab mafia member Corrado Galasso and you have a recipe for disaster. And of course, as always, the truth has a funny way of coming back to bite you in the ass. Zak ends up having a flashback and realizes that he didn’t lose the money – Richie blew it all on another vice: gambling. Richie is a perfect candidate for either a complete mental breakdown or a heart attack. And truth be told, a lot of the men in this series are or have been quite capable of bringing unnecessary drama upon themselves. Bruised egos, bad deals, failed business trips and illegal money have all been part of the music industry. Either way, things aren’t looking good. It’s all been seen before in previous episodes but let’s focus on the title – or more to the point the word ‘Queen.’

We have a few “Queens” here to examine – and this episode did not disappoint. Devon: a Queen who’s lost her crown and her empire. Her married life and supposed domestic bliss with Richie were not enough. She lost her identity as an artist. She gave up her dreams of modelling and photography to marry Richie. The money, the big house and the kids were not enough to provide a stable and fulfilling life. She can go off and sleep with as many guys as she wants in retaliation to what Richie has put her through, but it’s not going to solve her problems or her marital woes. And if she thinks that photographer she’s slumming with is really there because he wants to have a deep and meaningful relationship, she’d better think twice. As soon as he found out about her rolls of film with famous folks, can we say fortune hunter?!

Jamie is a young, naïve and ambitious woman who yearns to wear a crown, yet the crown she wants is out of her grasp. She provides drugs for company employees and when she’s not sleeping with one musician, she’s sleeping with a pair. She’s been at odds with her estranged mother; she’s been kicked out of her place; she has no money and no roots to put down. She has some street smarts in the sense that she can spot some musical talent and is good at keeping employees high and happy but is that any way to live your life or attempt to climb up the company ladder? When will she learn she has to develop keener business acumen and that if she wants to be taken seriously, that sleeping around and being a groupie is not the way to get ahead and get respect? 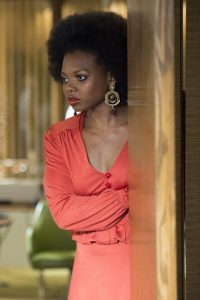 And of course, we have Richie’s secretary/personal assistant, Cece, who we all knew was pregnant, as soon as she got up and left the board meeting. Well, seeing as how this series takes place in the 1970’s and everyone in the music industry was sleeping with everyone else and not necessarily being responsible about it…..that was a given. I don’t know, I was a bit disappointed because in my humble opinion, Cece looked like a tough as nails gal who could take care of herself. After all, look who she works for – she seemed to be able to handle the many temper tantrums and ups and downs with all that goes on at American Century Records. But pregnant with Hannibal’s child?! Cece appeared to be the undisputed Queen at American Century – from fetching the coffee, to calming Richie’s bruised ego, handling all the meetings and scheduling to attending musical PR events with Richie as a sort of sexy liaison, well…..now, she’s in a bit of a bind. Seeing Richie give her money, you come to your own conclusion as to whether or not she’s going to have an abortion or keep the baby. Another crown relinquished.

The real Queen of this episode and to be completely blunt – the only one with the backbone and clout to wear the crown AND defend it successfully is none other than Andrea. Ballsy, ambitious and business savvy (which probably doesn’t go over very

well with the guys at ACR but too bad, so sad) Andrea is quick to examine a situation and formulate how to be proactive in order to get the right results. After all, she’s not the one who made a deal with the mob for financing, nor did she gamble money away, get high every day or screw up potential business deals. She was brought on to trim the place of it’s fat; to infuse creativity into the place and breathe new life into the daily goings on at American Century Records. Andrea doesn’t believe in withholding – especially when she figures out why Cece is so distraught and she also sizes up Jamie with venom. It’s got to be tough in a male dominated business such as the music industry – especially in the 1970s, when women were beginning to have more liberties with their personal and professional lives. She hits the nail on the head when she yells out about “why the women have to be such mindless idiots” (although we know she used MUCH saltier vocabulary). Brusque, aggressive and confident, Andrea is exactly what ACR needs and she is the Queen of the episode in every sense of the term. She can hold her own, go toe to toe with the big boys and has the savvy to read a situation and knows how to read people.

Perhaps Richie, Zak, Devon, Cece, Jamie and Co. ought to take a page from Andrea’s book on how to reign. Now let’s not forget the music:

Only one more episode to Season One. We lead into it here.