Two words you wouldn’t think to use in the same paragraph  Dennis Rodman and North Korea.  The story has been all over the news this week and HBO, as usual, has the inside scoop.  In their new documentary series VICE we’ll get to see what really happened in North Korea as HBO’s cameras were turned on for the event.  We can confirm that this will not be the first episode when the show premieres April 5th it will still be fresh when it airs later this spring.   This show should slide in nicely to the schedule right after Bill Maher’s weekly Friday night program. 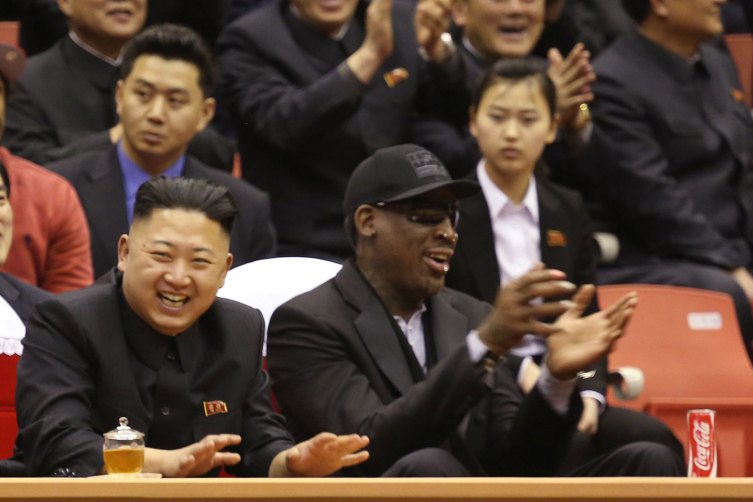 VICE, the Brooklyn-based youth media company, today led a team of “Basketball Diplomats” to Pyongyang, North Korea to engage in a cultural exchange mission. The delegation consists of VICE correspondent Ryan Duffy, NBA Hall of Famer Dennis Rodman, select members of the Harlem Globetrotters, and a production crew that will be filming for the upcoming HBO series VICE.

The VICE-led delegation arrived in the basketball-crazed city Pyongyang today for a week-long trip that will include running a basketball camp for North Korean children and engaging in community-based games to encourage openness and better relations with the outside world. Additionally, there may be a top-level scrimmage to be attended by Kim Jong Un, the leader of North Korea. No word yet if the game will be live streamed but maybe he’ll just watch NBA games online like a normal person.

Other activities that will be filmed on the trip for HBO’s VICE series will include visits to national sites and monuments, the Pyongyang Skate Park, and the national animation studio, SEK. The series debuts FRIDAY, APRIL 5 (11:00-11:30 p.m. ET/PT) on HBO.

Shane Smith, VICE Founder and host of the upcoming VICE series on HBO, said, “Is sending the Harlem Globetrotters and Dennis Rodman to the DPRK strange? In a word, yes. But finding common ground on the basketball court is a beautiful thing. These channels of cultural communication might appear untraditional, and perhaps they are, but we think it’s important just to keep the lines open. And if Washington isn’t going to send their Generals then we’ll send our Globetrotters – Cue music – ‘Sweet Georgia Brown.’ ”

VICE, a weekly series that premieres exclusively on HBO, is hosted by VICE correspondents, including the company’s founder, Shane Smith, and is executive produced by Bill Maher, Eddy Moretti and Smith, with CNN’s Fareed Zakaria serving as a consulting producer. Covering such stories as out-of-control political assassinations in the Philippines, the sumo/Mixed Martial Arts craze that has swept Senegal and the precarious nuclear stare-down in Kashmir, VICE features groundbreaking reporting from around the world.

We’ll keep you updated on this new series all spring long.  It looks to be a great addition to HBO’s expanding lineup this year.