“I’m starring down the barrel of 18 months of this shit.”

“Well, I’m a pretty good strategy guy. I could be your midwife, you know. Get my hands dirty…” 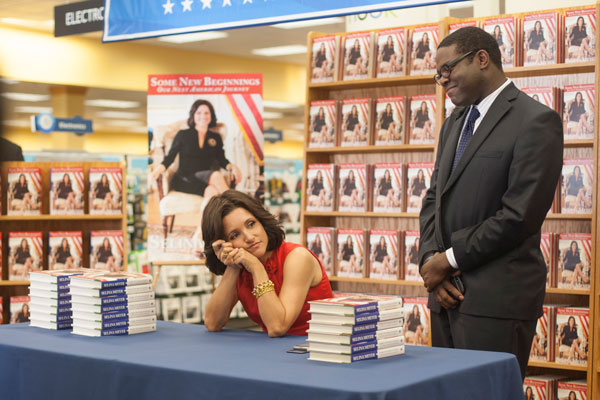 Before we begin to discuss episode one, season three of Veep, I have to make a very candid admission. I hope that no one will judge me too harshly and that I receive just a little bit of credit for being forthright and totally honest. There shall be no secrets here, between us, friends for so many seconds, so many dozens of milliseconds.

My admission, my confession, is this: I skipped, totally skipped, the entire second season of Veep.

I did, however, watch the entire first season and quite enjoyed it. It was for that reason that I thought to myself “I really should log on to HBOGO and watch the second season of Veep before reviewing any of season three’s episodes. Yes, yes, that is what I’ll do! I’ll hunker down on the couch, crack a few diet sodas, and knock out the season, one episode after the other!”

Well, that never happened. In my defense, there just wasn’t time. There was laundry to do, kids to take care of, dogs to walk, books to read, email to check, facebook to browse, other television shows to watch, and movies. Oh, the movies! There was just too much media, and life, to content with; Veep, season two just took a backseat, again and again.

But thankfully, blessedly, HBO gave me a small recap of season two before this, the first episode of season three. All that I really needed to know, it turns out, is that the POTUS (President of the United states, obviously) isn’t running for a second term and that Selina, the Veep, wants to step in to get the party’s nomination.

Now, we begin discussion of season three, episode one, in earnest.

As a way in which to help secure the party’s nomination, Selina has written a book and has gone on a small book tour, in promotion of said book. While Selina is doing that, Mike is getting married. All of Selina’s normal staff is at the wedding, leaving Selina with a small B-team. While taking a break from signing books, Selina is visited by Ben Caffrey, the President’s current Chief-of-Staff. Together, they decide to team up for Selina’s campaign, in spite of the fact that the Secretary of Defense, George Maddox, is also positioning himself for a run. 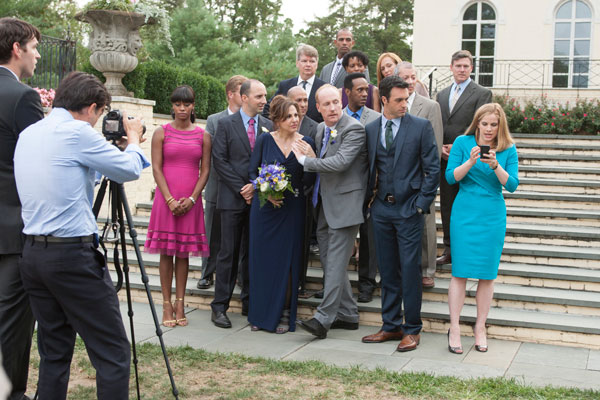 The bit of hilarious dialog quoted above is taken from their meeting and really helps to exemplify the sort of brash, irreverent humor that Veep is so good at. The interactions between Selina and Caffrey were snappy and business-like, finding humor in the fact that they don’t care about the things that you hope that they do care about, and care more about themselves and winning at all costs, everything else be dammed. Mike’s wedding also gave time for Amy and Dan to butt heads, over and over, as they both try to one-up each other, vying for the spot of Selina’s campaign manager. The real joke here is that Selina would be crazy to give the job to either one of them, of course. And finally Jonah, the foul-mouthed, big-headed, egotistic braggart, got outed as “West Wing Man” (or maybe West Wingman, if you have an aviator’s mindset), an internet rumor-monger, and fired, choosing not to go down gracefully, but to scream, curse, and generally make an ass out of himself the entire time.

It seems as though this season will focus on Selina trying to best Maddox and get the party’s presidential nomination, while also following Jonah’s post-White House life and the lives of Selina’s staff, including the now-married Mike. Episode one did a great job of setting the stage for that. And now that the heavy-lifting is done, as far as establishing the plot points for the season, I expect Veep to get better as the season progresses.

Here’s a preview for episode 2: